Where Are All the Butterflies?

Find this article at:
go.ncsu.edu/readext?307288
— Written By Debbie Roos 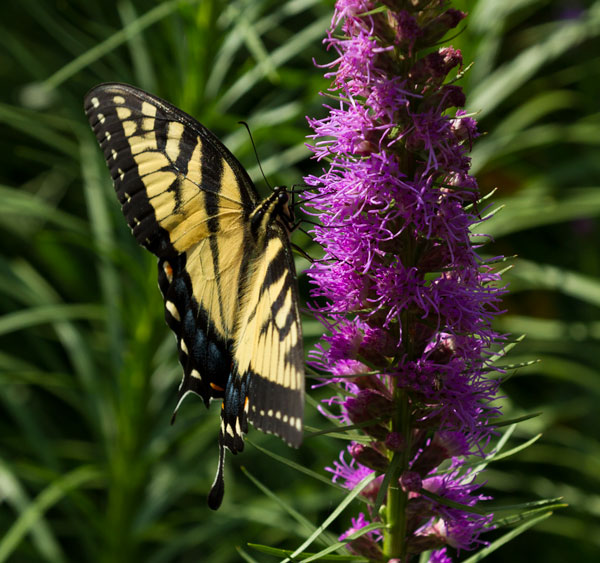 Today, July 13, I saw my first tiger swallowtail butterfly of the year, much later than normal.

Today I saw my first eastern tiger swallowtail butterfly of the year in my pollinator garden in Pittsboro, and it’s mid-July! Last week I saw my first black swallowtail. Earlier in the spring I had a handful of black swallowtail and monarch caterpillars in the garden, and I saw one lonely adult monarch on April 26 this year. I  have seen dozens of others,  like hairstreaks and American ladies, but way fewer than in a normal year. Monarch butterflies receive alot of attention in the national media as their numbers have decreased drastically in the past few years. What about our other butterflies? 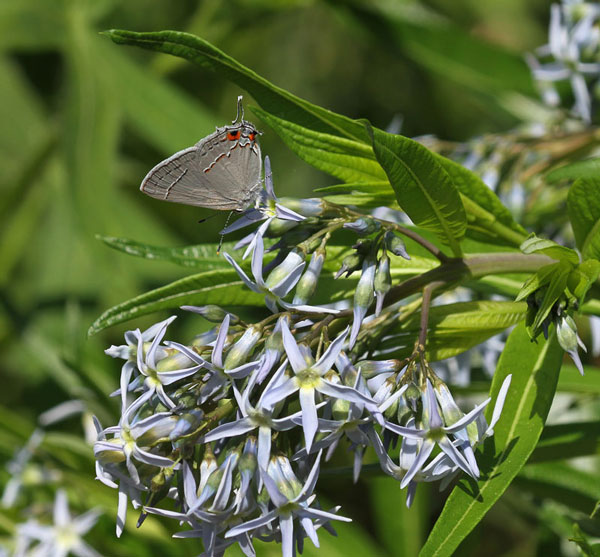 Gray hairstreak on bluestar in mid-May.

Last summer we seemed to have an abundance of butterflies, at least the eastern tiger swallowtails, and I wrote about it in a September 2013 blog post.

Alot of folks have asked me why they aren’t seeing many butterflies this year. I can’t answer that but I can share what one of North Carolina’s top butterfly experts thinks.

Dr. LeGrand compiles season summaries of butterfly sightings for the Carolina Butterfly Society’s The Chrysalis newsletter. You can view his summaries from 2012-2014 below.

First of all, we are not imagining things, there IS a dearth of butterflies this year. In fact, Dr. LeGrand says that “2014 is – by far – the poorest year for butterflies that I have witnessed since I started butterflying in 1991. Even finding a swallowtail, yes even a Tiger Swallowtail, has been a chore, as has just about everything else.”

Dr. LeGrand notes that both winters of 2012-13 and 2013-14 were rather cold, and the first was much colder than normal. The latter was more normal; however, both had great temperature variations and quite a few severe ice and snow events (relative to normal) in the latter part of February and especially March, which had a negative impact on the initial butterfly brood. This period of the year seems to be crucial in how our butterfly numbers are going to be for much of the year. See LeGrand’s data summaries below.

Other observations from Dr. LeGrand: Since North Carolina has not been in drought status for nearly all of these two years, drought cannot be a factor in the low butterfly numbers. And, of course, “habitat loss” isn’t significant on a large scale, so that doesn’t explain the sharp drop in numbers. Why is the eastern half of NC so depauperate, as compared with the western half of the state? Usually, in a given part of a year, a group of species is “low” – maybe American Lady and Red Admiral, or the anglewings, or the grass skippers, or hairstreaks. But this year, EVERYTHING is below normal in the eastern half of NC. My personal belief – severe cold AND wetness, in combination, in winter and especially into March, has done in various life stages – allowing for more fungi, or predators, on larvae, etc., or possibly washing away pupae, etc.

I guess it remains to be seen how much the butterfly population rebounds this year. Here’s hoping we see an uptick in the numbers and diversity of butterflies for the remainder of 2014!

This spring was remarkable for its record high temperatures in March (in some cities by several degrees); and with a warmer than normal February, most species were flying 10-14 days earlier than normal. Thus, record early flight dates were made for dozens of species. The best “spring hatch” of American Lady and Red Admiral in recent memory was noted in 2012; there were numerous daily counts of several dozen, with the best one-day count being 100 Red Admirals. In addition, though hardly an invasion, there were about five state reports for Painted Lady. This season was highlighted by a handful of parties exploring several areas of Madison and Buncombe counties over several weeks in April and May. Many first records were made in Madison County, a low-elevation mountain county, and most of these “new” species are known from only one to several other counties in this province.

Summer 2012
This was an excellent season for species diversity and numbers, as luxuriant rainfall kept all parts of the state from falling into drought status, which cannot be said for the past two summers. And, the fact that Florida and the coasts of Georgia and South Carolina were finally out of drought status meant that there was undoubtedly good reproduction and emigration of “southern” species into the state. Though certainly the large numbers of Painted Ladies and Little Yellows this summer came to the state from the west or southwest, good numbers of Long-tailed Skippers and Ocola Skippers, plus the usual strong numbers of Cloudless Sulphurs, likely entered the state from the south. The lush conditions also led to some remarkable high counts for some species. The flights of most species continued to be advanced by 7-14 days, though the relatively cool June temperatures “calibrated” flights more in line with previous years by late in the season.

The excellent numbers and diversity of species from the summer continued into the fall. Unfortunately, the good handful of immigrants and strays reported from neighboring South Carolina during the fall months were not able to be found in North Carolina, other than Southern Dogface. The highlight was the great proliferation of Dainty Sulphurs in the eastern half of the Piedmont, absolutely unprecedented in the state.

This was one of the coldest springs on record in the state, with March and May temperatures being far below normal. Rainfall was generally above normal. The cold weather delayed the flights of all species by 10-14 days, and the temperatures combined with the rainfall seemed to have greatly depressed numbers of emerging butterflies, especially so in the eastern half of the state, which had one of its more dismal seasons in many years.

Summer 2013 was one of the wettest and coolest on record, and it also was much cloudier than usual. Though there was some recovery of butterfly populations in the second broods from the first broods, numbers of individuals remained quite low, among the lowest in 10-20 years. In addition, there was practically no immigration of migrants into the state – such as Painted Lady (one record), Little Yellow (no records), and Long-tailed Skipper (no records). The Monarch flight was also quite poor, with many observers going the season without seeing any.

After a relatively cool and cloudy July and August, the fall season weather finally turned “normal” in September, with temperatures at or slightly above normal, and rainfall on the light side, providing excellent conditions for butterfly observations, as well as for northbound movement of migrants. Dry weather continued for most of the fall, but October was one of the cloudiest on record, and November also turned quite a bit colder than usual. Thus, there were few notable late dates of stragglers. Despite weather after September that was not overly favorable for immigrants to reach the state, there was a notable northbound movement of Zebra Longwing and several other notable strays. After a summer season with hardly any reports of Painted Lady, Little Yellow, and Long-tailed Skipper, quite a few of each were seen this fall, though in smaller numbers than in many recent years; and, the latter two stayed mainly near the southern half of the coast. However, the Monarch flight was very poor, with few reports, even from the mountains, of double-digit counts.

March was much cooler than average, setting back emergences of adults and thus the flight periods by about 10 days. Fortunately, rainfall over most of the state was fairly close to normal; essentially no areas in the state were under any drought status. As with most of 2013, butterfly numbers and diversity continued to be quite low in the eastern half of the state, for unknown reasons. Observers from Winston-Salem and Charlotte westward often had good results. There was essentially no movement of Painted Lady into the region, and numbers of Monarchs remain low, with only a handful of records.