Thanks to the following contributors:

The National Weather Service has issued a hurricane watch for the North Carolina coastline as Hanna approaches, with two more storms on her tail: Hurricane Ike (currently a category 4 hurricane) and Tropical Storm Josephine. As of noon on September 4, forecasters were predicting that the Triangle area could see 2-3 inches of rain from Hanna, so hopefully it won’t be too much of a problem. But this is a good time to review some strategies to prepare your operation in the event of a hurricane. It is your responsibility to monitor the weather conditions closely and make decisions. It is my hope that the information below will give you some things to think about as you consider your options.

To Plant or Not to Plant?

This is the season for planting and seeding fall crops, and some of you are wondering whether or not to plant in advance of the coming weather. This may not be an easy decision so I talked with a few farmers who have decades of experience to see what they had to say.

Alex and Betsy Hitt of Peregrine Farm near Graham have been through their share of severe weather. In 1996, Hurricane Fran brought 7-8 hours of 80 mph winds that produced downed trees, flooding, and ruined crops. They lost power for over a week.

The Hitts avoid doing any kind of soil preparation or planting prior to severe weather. Excess rains and high winds can beat down transplants, leach out fertilizer, and cause severe erosion, especially on the slightly sloping fields at Peregrine.

Stefan Hartmann of Black River Organic Farm in Ivanhoe experienced major flooding (over 25 inches of rain!) and crop loss with Hurricane Floyd in 1999. As Hurricane Hanna ponders making landfall on the North Carolina coast, Stefan is busy readying the farm. He now has lots of exposed soil since he is still planting for fall, and he is planning on disking these exposed areas to coarsen them up before the rains come this weekend. He will disk against the slope to block runoff and minimize erosion. This is for exposed soil only; if there is adequate groundcover, even if it’s just weeds, then he will not disturb the soil. Stefan will also use straw bales to block runoff in problem areas. He will not seed or plant if he anticipates getting more than 2 inches of rain (he is on well-drained sandy soils).

Steve Moore, (former) Small Farm Manager at the Center for Environmental Farming Systems in Goldsboro, is trying to decide whether or not to plant before the storm. With two more named storms potentially coming our way on the heels of Hanna, he is worried that if he doesn’t plant now then it could be 1-2 weeks before he could plant if we get a lot of rain. Steve said that if he has a field he needed to get into quickly, then he might chisel plow it real coarsely before the storm to slow down water movement. Steve is farming flat ground.

Ken Dawson of Maple Spring Gardens in Cedar Grove uses raised beds and plastic mulch for many of his crops so he is able to continue planting ahead of a storm. If more than a couple of inches of rain are predicted he will delay direct seeding.

So…the bottom line is, you have to consider the your own unique conditions including slope, soil type, and potential for erosion and weigh these factors against the forecast for rain and wind. Planting before a storm can be risky if there is flooding or damaging winds, but waiting to plant until after the storm can also be risky if you are not able to get back into the field in a timely manner. You also risk compacting soils if you try and do tractor work on saturated soils after a storm.

Another big decision farmers typically face before a storm is whether or not to remove greenhouse plastic. This will depend on the strength of the greenhouse frame and the predicted strength, direction, and duration of winds.

Alex and Betsy Hitt have both Haygrove multi-bay tunnels and high tunnels. The Haygrove tunnels are not designed to withstand high winds so they usually make the decision to remove the plastic when the forecasted wind speed is over 50 mph. They said that the few hours spent removing plastic is much better than losing the entire tunnel. 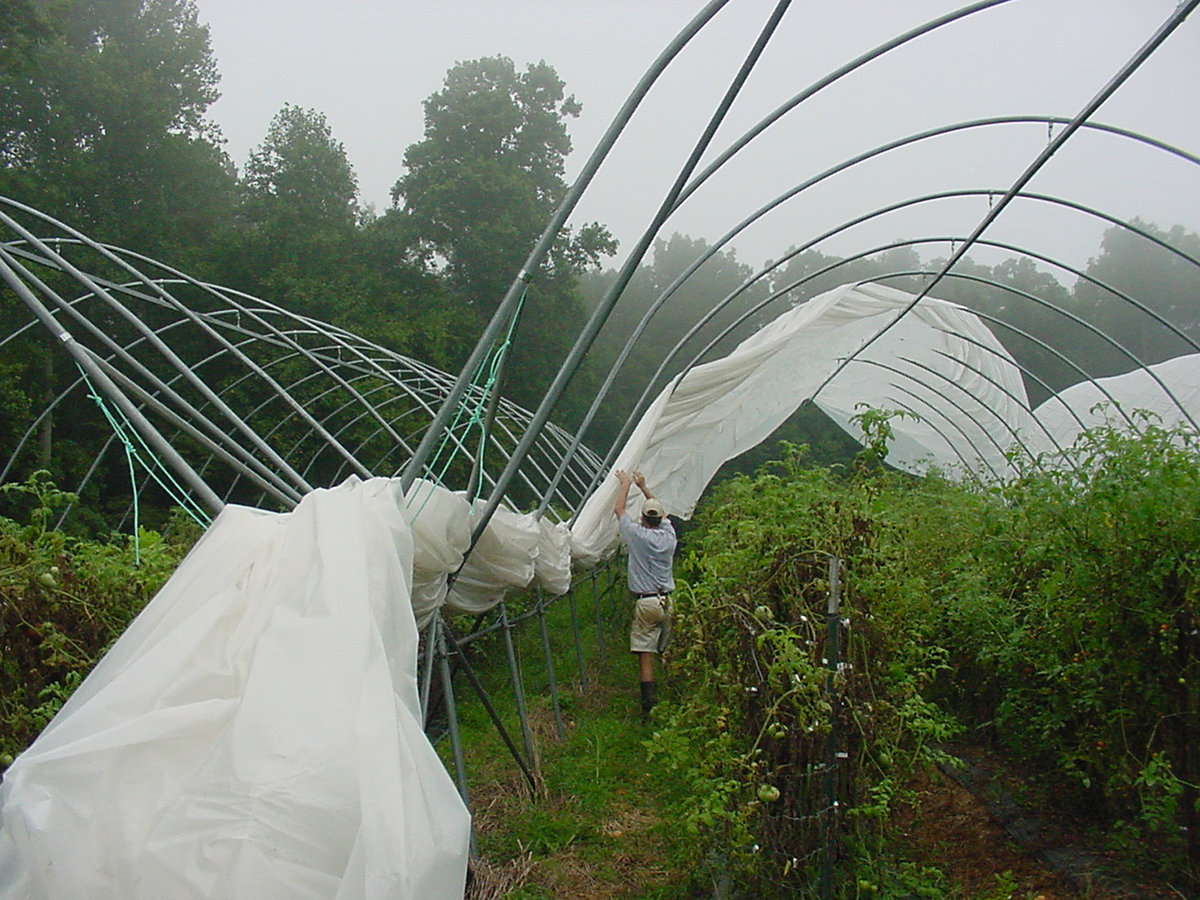 Alex Hitt removes the plastic from a Haygrove tunnel before Hurricane Charley in 2004. Photo by Debbie Roos.

Steve Moore uses Atlas high tunnels with sturdy frames that are engineered to withstand winds of up to 100 mph. Before a storm he rolls down and doubly secures the sides as well as the doors so they don’t blow in. If the power goes out during and/or after the storm, the greenhouse could lose its inflation which will cause problems for keeping the plastic on. It is helpful to have a back-up generator on hand. If he doesn’t have that then he makes sure he has lots of rope (especially if the greenhouse is vulnerable to the prevailing winds). He attaches the rope to the baseboard on one side and runs it over the ridge and attaches it to the baseboard on the other side. He will zig-zag several times over the top of the tunnel to help secure the plastic.

Ken Dawson also uses Atlas Greenhouses and he built the frame very strong with cross-trusses. He stressed the importance of rolling down the sides before the winds come because you don’t want to give the wind anything to grab. Ken doesn’t worry about removing the plastic on his strong greenhouses unless the wind is expected to be over 100 mph.

Stefan Hartmann has an old tobacco greenhouse and he closes it completely and removes the plastic if winds are predicted to exceed 80 mph.

Doug Jones of Piedmont Biofarm had alot of damage to a lightweight high tunnel from Hurricane Isabel in 2003 because he didn’t remove the plastic. The winds snapped the metal frame. He is considering removing the shade cloth from his current tunnel because he feels the rough texture may make it easier for the wind to pick it up (as compared to the smooth surface of plastic).

It is very important to remember to ventilate the greenhouse as soon as possible after the storm has passed. It won’t do any good to protect the crops inside from the storm only to “cook” them after it has passed!

Crops intended for human consumption are considered contaminated if they have been covered with flood waters from rivers, creeks or streams.

Many food crops are subject to damage or decay if they are flooded for more than a couple days, in which case the crop will either be in a state of deterioration, or it will not cure and store properly. Growers are aware of these conditions and routinely do not harvest crops of suspect quality for fear of damaging the remainder of the stored crop. In effect, these conditions will render most of the flood-affected crop unharvestable or unmarketable.

Before cleanup or crop destruction occurs in flooded fields, growers are advised to check with their crop insurance and/or their local Farm Services Agency (FSA) representatives regarding exact documentation to certify losses, procedures for initiating claims, and possible financial assistance.

If you have questions, contact the commodity specialist, your local FSA or crop insurance representatives or the Food and Drug Protection Division of NCDA&CS at 919-733-7366.

Trees and Hurricanes – University of Florida