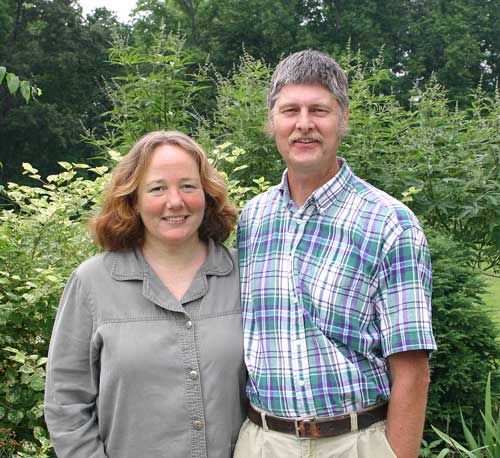 Graham, NC – Small-scale specialists who are among North Carolina’s greatest examples of profitable, sustainable farmers, Alex and Betsy Hitt were named the Southern Region winners of the 2006 Patrick Madden Award. The honor, awarded to exemplary farmers in four U.S. regions by the Sustainable Agriculture Research and Education (SARE) program, USDA, was given on Aug. 16 at a national conference in Wisconsin.

Since 1981, the Hitts have committed to farming practices that protect natural resources and have turned a five-acre farm into an environmental gem and profit center. Tirelessly, the couple shares their tried-and-tested experiences with other farmers and participates in activities that benefit their community.

“Whenever I’m visiting with a SARE grant recipient or a farmer needing a practical solution to some problem, as often as not, I find myself saying, ‘I know these farmers — the Hitts – in North Carolina, you should give them a call,’ ” says John Mayne, Southern Region SARE Assistant Director. “For me, there was no question about who should be the recipients of the Patrick Madden award in the South.”

When they began farming in 1981, the Hitts cultivated five acres and set a goal of going smaller without sacrificing income. Over the years, they have reduced acreage and labor by improving their soil with cover crops, concentrating on high-value crops that grow well in the area, and direct marketing through the Carrboro Farmers’ Market and Weaver Street Market, a cooperative grocery store. Each acre returns a minimum of $20,000 annually, while four high-tunnel greenhouses bring in $1,000 per crop.

The Hitts embrace their small scale, growing 80 varieties of 23 vegetables along with 164 varieties of cut flowers on just three acres. Betsy, who concentrates on the flower half of the farm, says Canterbury Bells and lisianthus draw the most customers due to their clear bright colors and long vase life.

On the vegetable side of the farm, Alex is partial to heirloom tomatoes, especially the Cherokee Purple, for their incredible potential in the marketplace. “They are a challenge to grow, but when you get it right, you have a superior product,” he says. “Local chefs have helped us appreciate the positive attributes that make these tomatoes worth the extra effort.”

The Hitts are generous with their time, cooperating with researchers and welcoming other farmers who want to see sustainable methods at work. They both have served on the boards of local, state and national organizations that promote sound farming practices and support rural communities.

Mayne says Peregrine Farm is a valuable educational resource. “Alex and Betsy exemplify what Patrick Madden worked for,” he says, referring to SARE’s first director for whom the award was named. “They practice what they believe in how they farm and in how they live their lives.”

The Hitts are joined by other regional Madden Award winners, including: