Whitney May is Celebrity Dairy’s resident cheesemaker. She spent two summers as an apprentice under owners Fleming and Brit Pfann and took over full-time cheesemaking duties this spring. Whitney’s enthusiatic and dedicated presence at Celebrity Dairy is making a big difference in the lives of Fleming and Brit. Fleming is still involved in selling at the Carrboro Farmers’ Market, but otherwise has increased the time she can devote to family, and Brit is now able to spend more time operating the farm’s Bed & Breakfast agri-tourism business

The cheese making season is about 10 months long. The goats are milked from mid-February to mid-December before they are dried off for the next season. The photos below reveal the art and science that goes into making fresh chèvre logs. 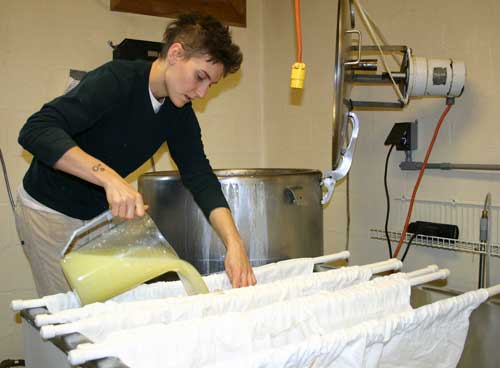 After the fresh goat milk has been pasteurized and set with rennet and culture, Whitney dips the curd into the muslin bags to separate the curds and whey. Okay, ‘fess up, I know what’s running through your head…little Miss Muffet, sat on her tuffet, eating her curds and whey… 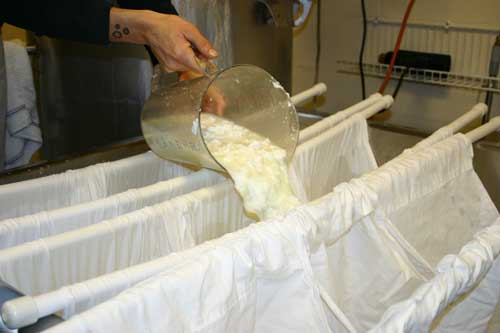 After 8-12 hours the whey will have drained off, leaving only the curd. The whey gets diluted with water and is fed back to the goats. They love it! 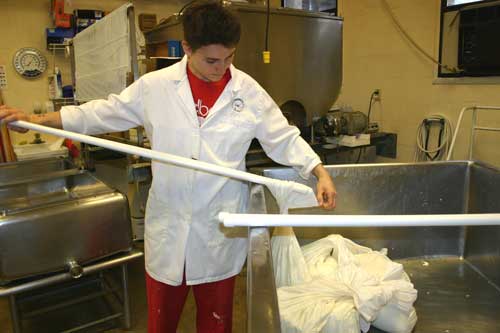 Whitney removes the cloth bags after the curd has drained. Let the cheese making begin! 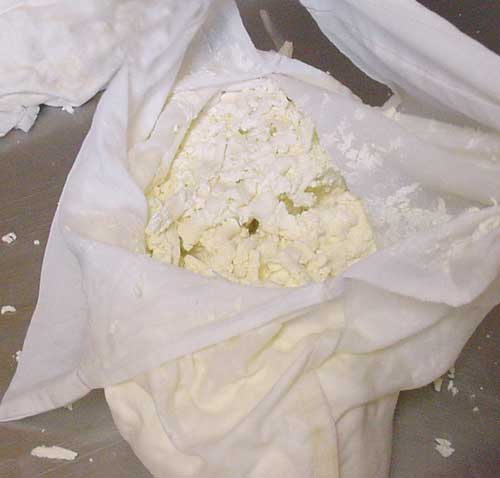 The curd after the whey has been drained off. 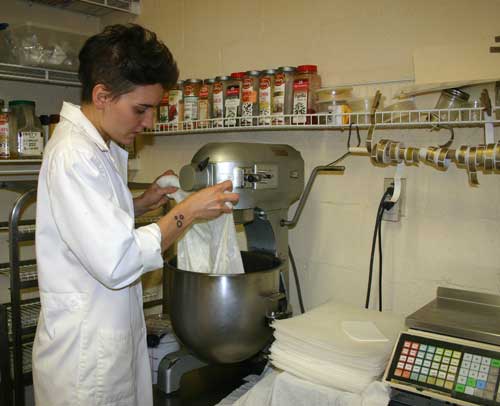 The curd is dumped into the mixer, and salt is added to balance the flavor and extend the shelf life. 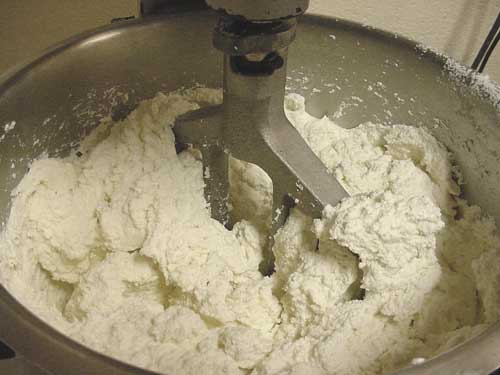 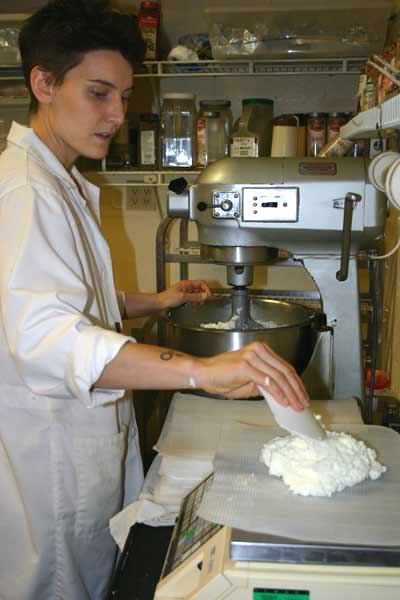 Whitney weighs out the cheese for rolling logs. The logs are finished off at a pound, but she weighs out a little extra because they will lose some liquid as they dry out.

Fresh cheese waiting to be rolled into logs. They are rolled in cross-stitch mats! 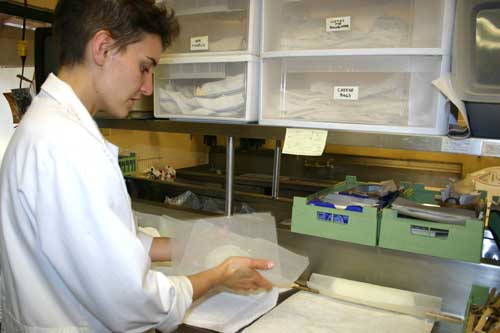 The cheese is rolled to make logs. It took three months for Whitney to learn how to roll correctly – it takes a delicate touch to learn how to manipulate the cheese. Her motions are both graceful and efficient, and she makes it look deceptively simple! 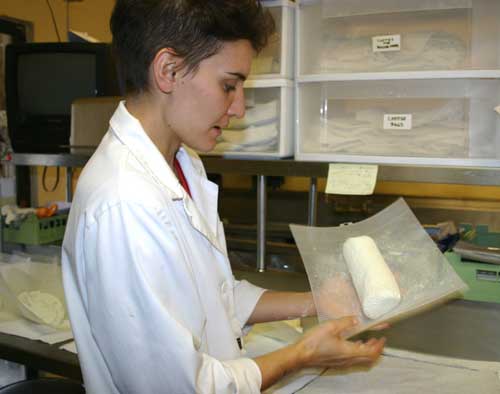 The rolling process varies throughout the season as the milk composition changes and also the environment in the cheese room changes. This log is ready to be wrapped in its mat and allowed to sit out overnight. 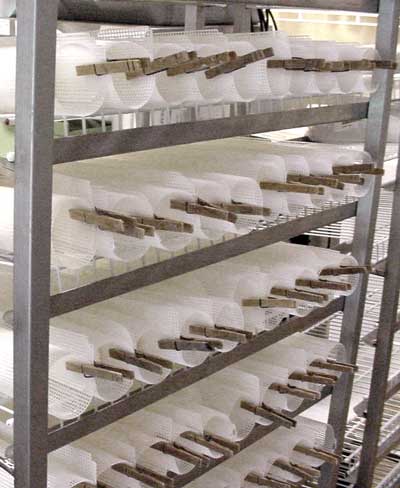 The logs sit overnight – they lose some weight as they dry out and they become less spreadable and more crumbly. They also develop a little flavor during this process. 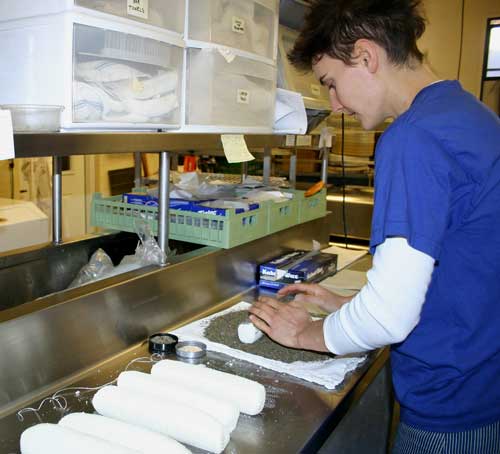 The cheese logs are rolled in various herb mixtures, with fun names like Asian Luv, French Kiss, Garbo, and Confetti. Each flavor has its own following of devoted fans! 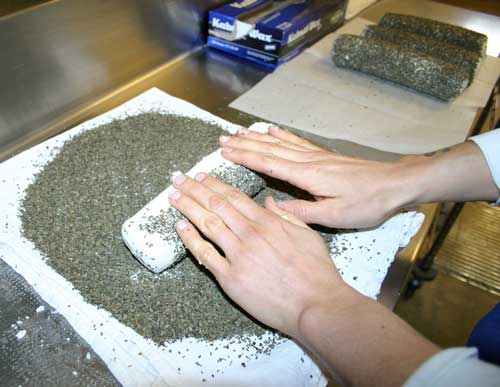 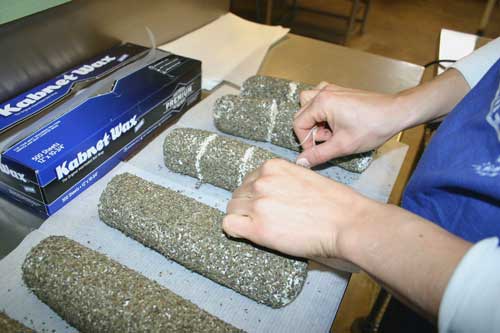 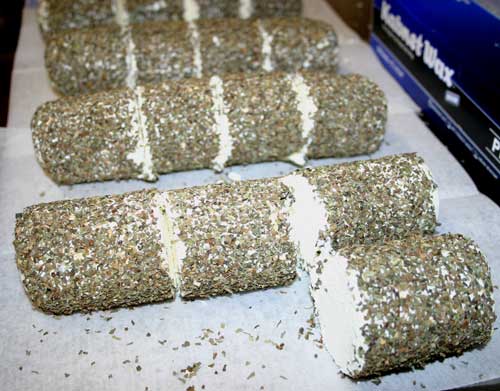 The herbed logs are cut with dental floss so they won’t crumble or stick. These 1/4 pound logs are ready to be wrapped and labeled. 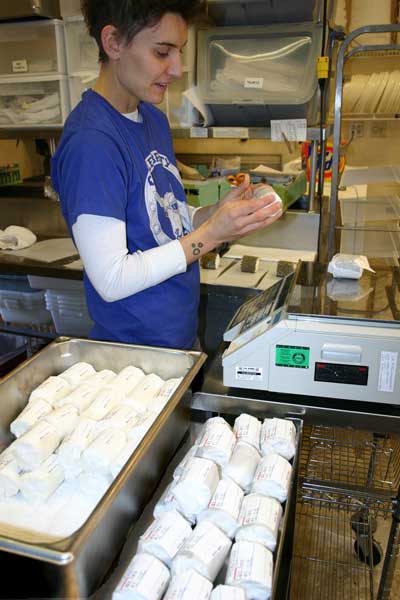 Celebrity Dairy sells cheese to about 20 wholesale customers (restaurants and grocery retailers) as well as at the Carrboro Farmers’ Market.

Celebrity Dairy produces other types of cheeses other than the fresh chèvre logs. Their Serendipity goat cheese spread has the consistency of soft cream cheese and comes plain or flavored with herbs, fruit, peppers, chocolate – but not all together! Celebrity also produces mold-ripened chèvre, which are limited production cheeses made following traditional French farrmstead techniques.

Stay tuned to this website for a full farm profile of Celebriy Dairy, coming in early 2006!