Ginger and Turmeric a High Value Crop for Local Growers

In January 2011 I was at a Southern SAWG Sustainable Agriculture Conference in Chattanooga, TN when I spotted Maine grower Susan Anderson’s East Branch Ginger booth at the trade show. Susan was selling certified organic disease-free ginger seed stock. I was intrigued because I knew a couple of forward-thinking farmers were experimentally growing ginger in North Carolina but very little was known about it. So I hung around Susan’s booth during her presentations until the crowds had cleared away and then introduced myself. I told her I was an Agriculture Agent with N.C. Cooperative Extension and asked her if she would be willing to do a presentation on growing ginger at a Cooperative Extension workshop in Chatham County, North Carolina. She said yes! Long story short…a mere two months later we did our first Ginger Production Workshop in Chatham County, she and her husband and two kids ended up moving to Chatham County that May and we went on to do two more workshops in 2012 on growing ginger and turmeric. In all, about 250 growers from across the state attended these workshops. East Branch Ginger has now transitioned to producing microgreens and edible flowers and Susan and I have become good friends. And many growers are now growing these specialty crops across the state!

For folks close to Pittsboro, you can also pre-order ginger and turmeric for pick-up at the weekly Pittsboro Farmers’ Market on Thursdays from 3-6 p.m. Order on-line from the farm store before midnight each Wednesday for Thursday pick-up (the on-line store opens up again on Thursday evening).

Chefs, beer and kombucha brewers, and others wanting five pounds or more can visit the Granite Springs Farm website to learn about wholesale opportunities.

Meredith raises her ginger and turmeric in high tunnels. Seed stock arrives in February and is pre-sprouted in flats of coco coir in a germination chamber that maintains high temperatures and high humidity. After about a month of pre-sprouting, the seed pieces are planted in the ground in March (some growers plant into plastic grow bags) once soil temperatures are consistently above 50° F and actively warming. Ginger is a heavy feeder and gets hilled and fertilized about three times during the growing season. Hilling ensures the rhizomes stay covered during growth and increases yield. Baby ginger is harvested about six months after planting while turmeric takes about seven months. NC growers produce baby ginger which is tender with robust flavor and not fibrous like mature ginger.

Ginger has many uses: it can be used frozen, dried, or used fresh for cooking; pickled, candied, juiced, made into tea, and taken medicinally. Turmeric is also used extensively in cooking and it also has many medicinal uses.

I took the photos below in late October at Granite Springs Farm during a harvest day. 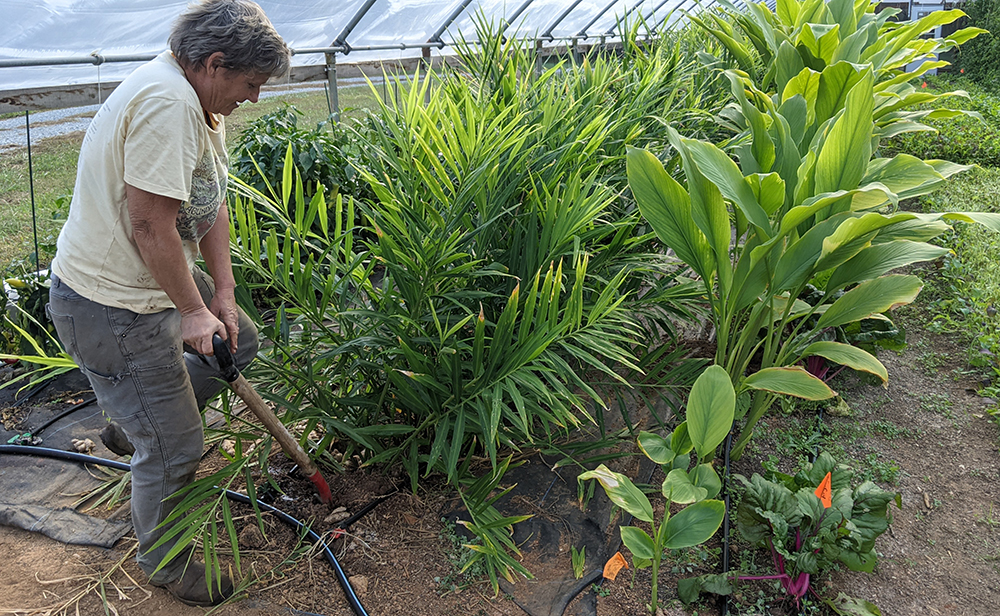 Meredith uses a digging fork to harvest a ginger plant in one of the high tunnels. The ginger seed stock is acquired in February and it goes through a one month pre-sprout process before planting. Meredith built a germination chamber inside her farm kitchen that maintains the seed stock at around 80 degrees with high humidity for about a month to pre-sprout. Photo by Debbie Roos. 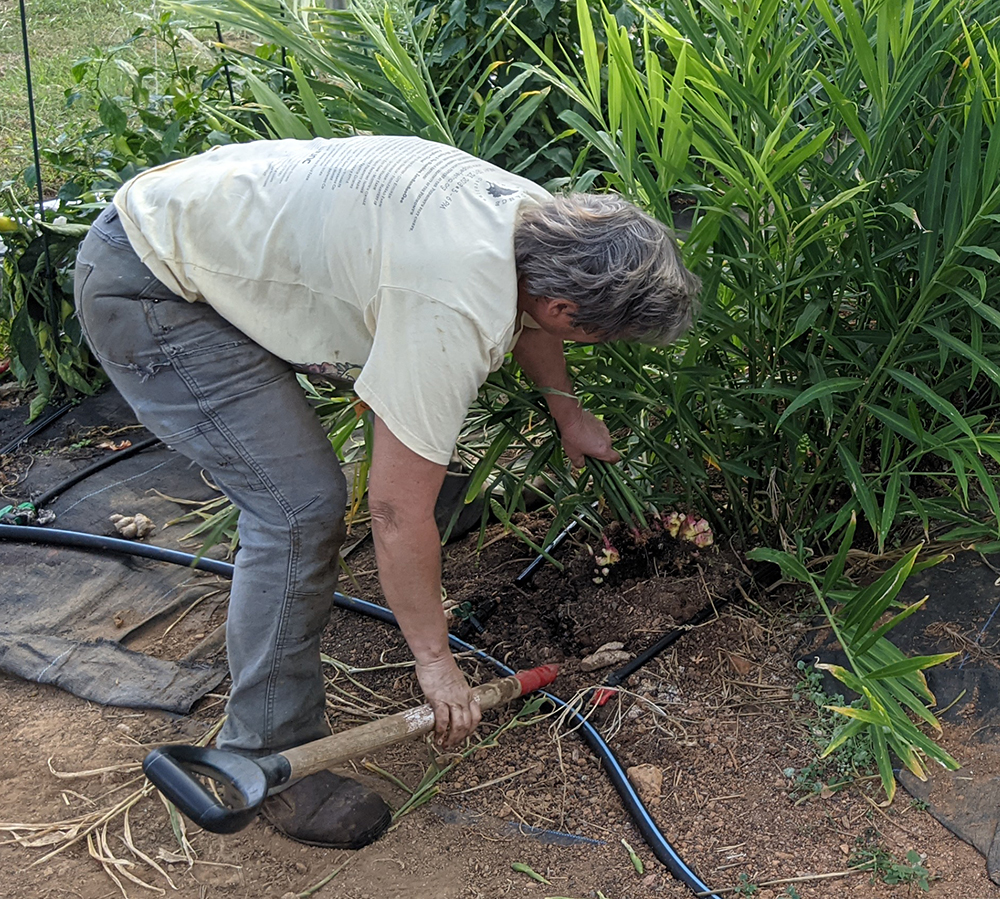 The fork loosens the soil so the ginger rhizomes can be easily harvested. Meredith plants the ginger in March (after pre-sprouting) so it takes about six months before the rhizomes are ready to harvest. Rhizome growth increase later in the season as day length decreases. Photo by Debbie Roos. 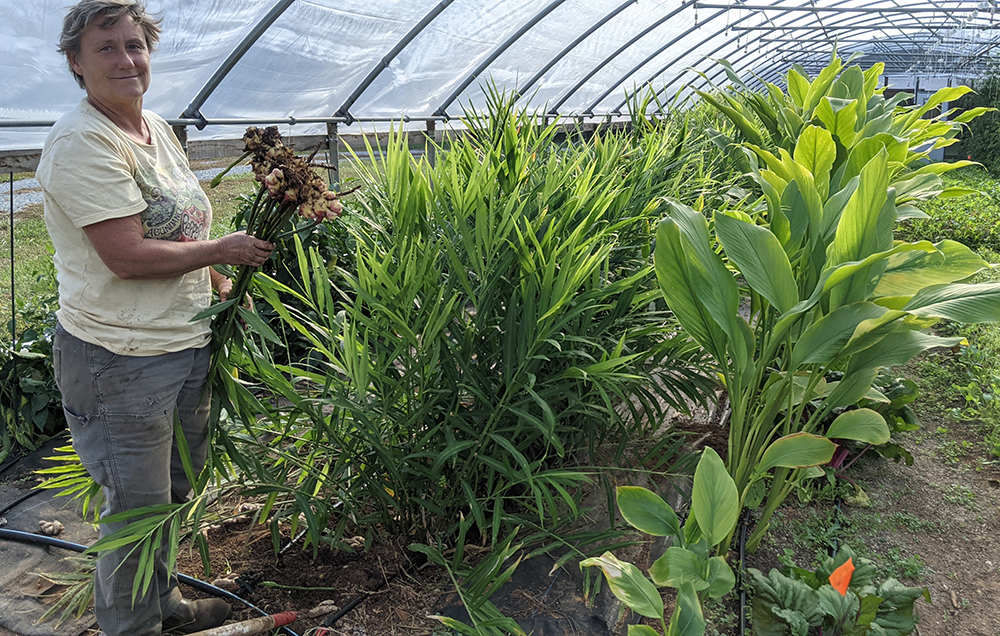 Freshly harvested ginger root! Meredith will be able to harvest ginger for a 3-4 week period. Growers are harvesting tender baby ginger…it’s not fibrous like the mature ginger root you find in grocery stores and doesn’t need peeling. Photo by Debbie Roos.

Now it’s time to harvest some turmeric! Like ginger, the turmeric also goes through a pre-sprouting process. Photo by Debbie Roos. 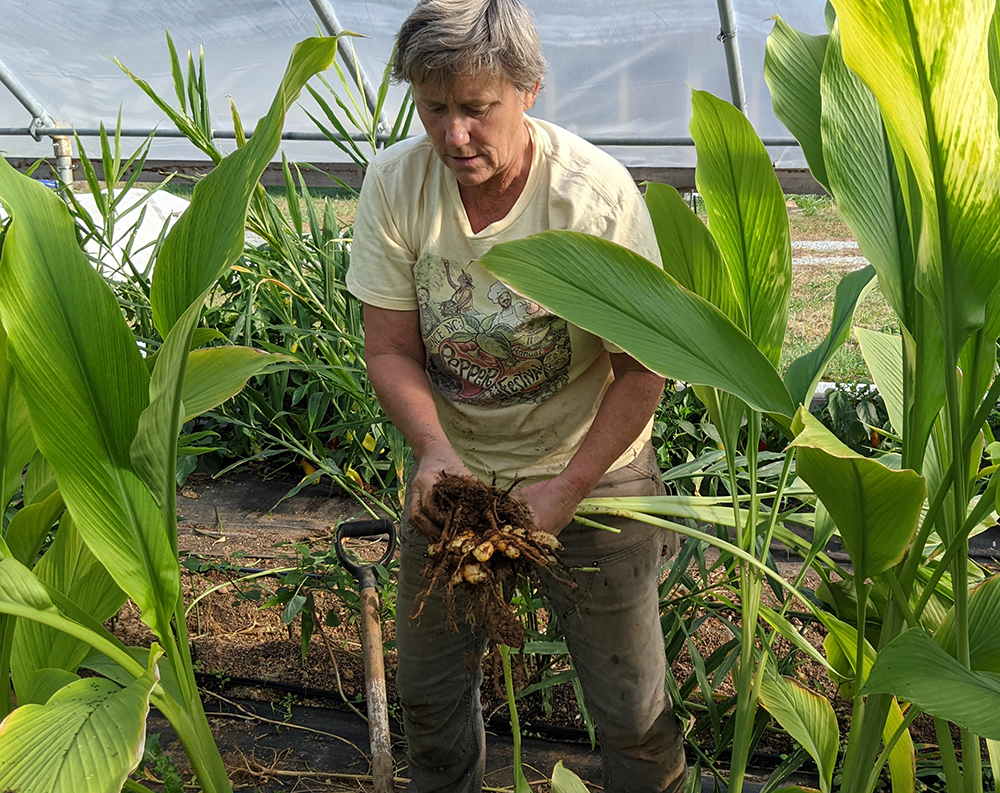 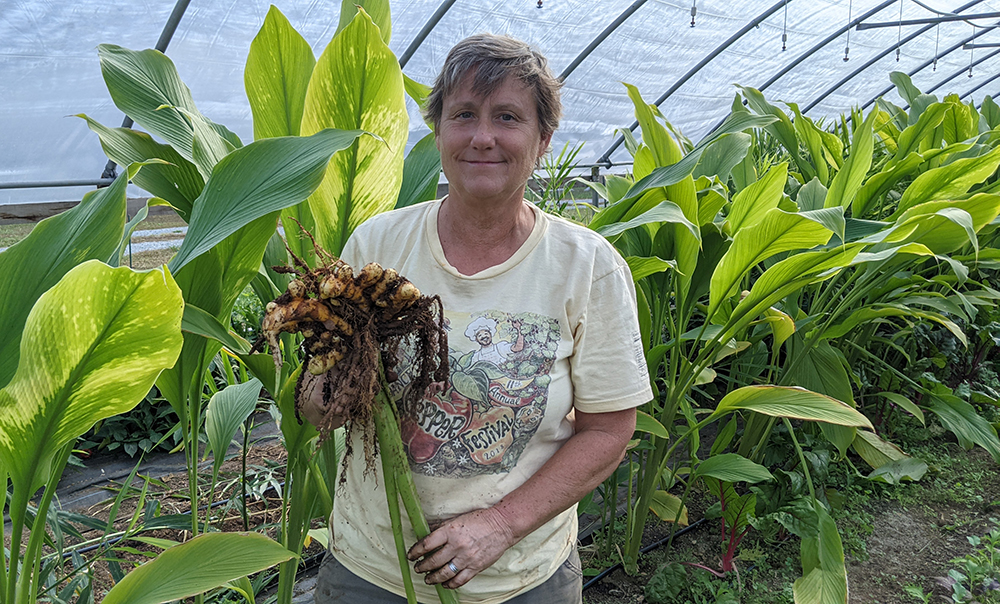 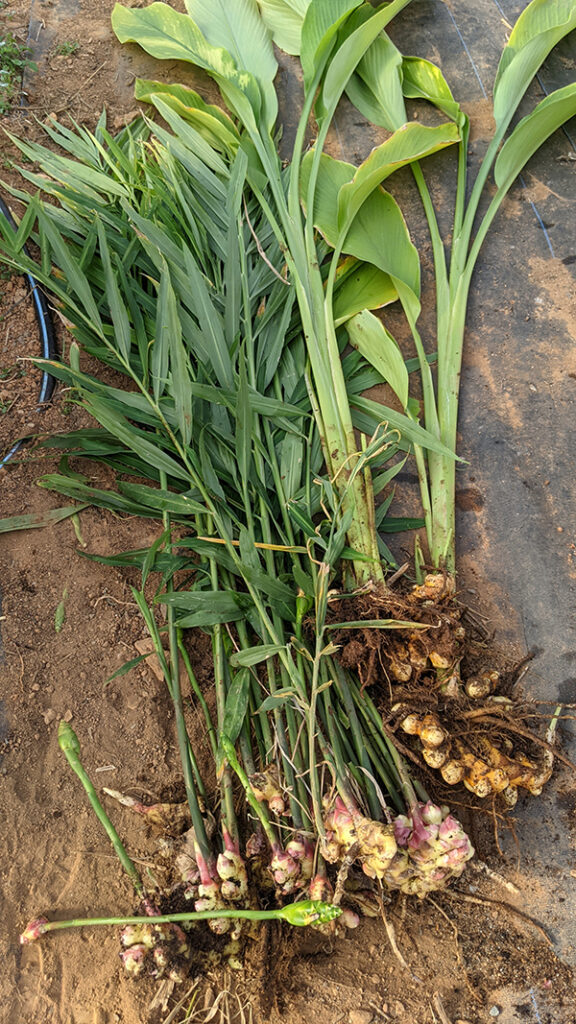 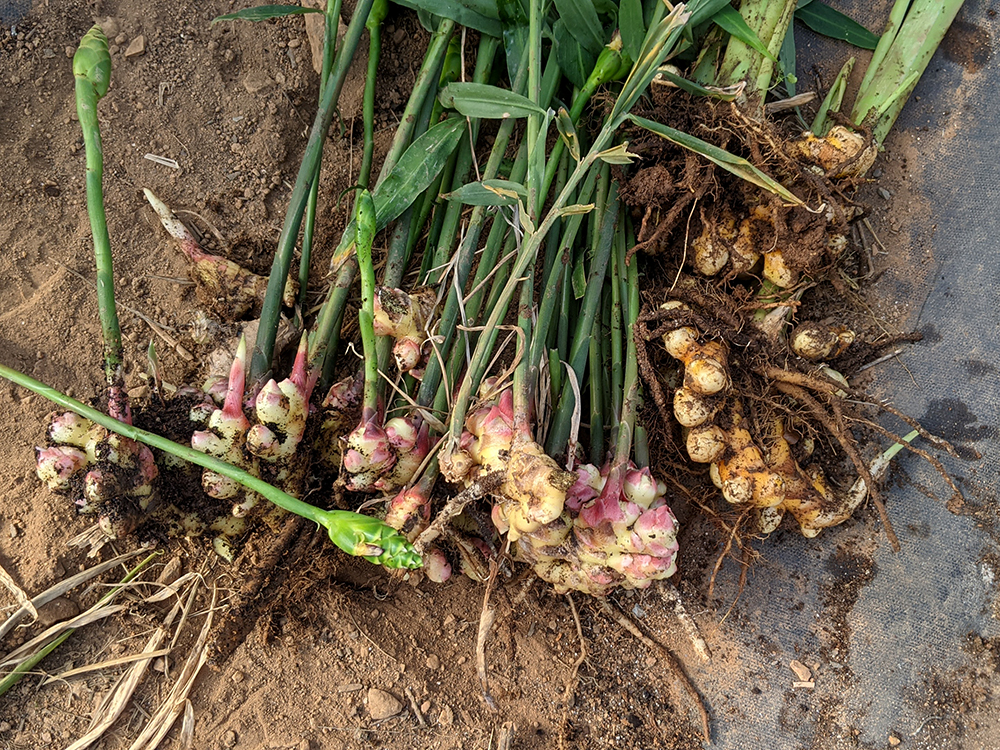 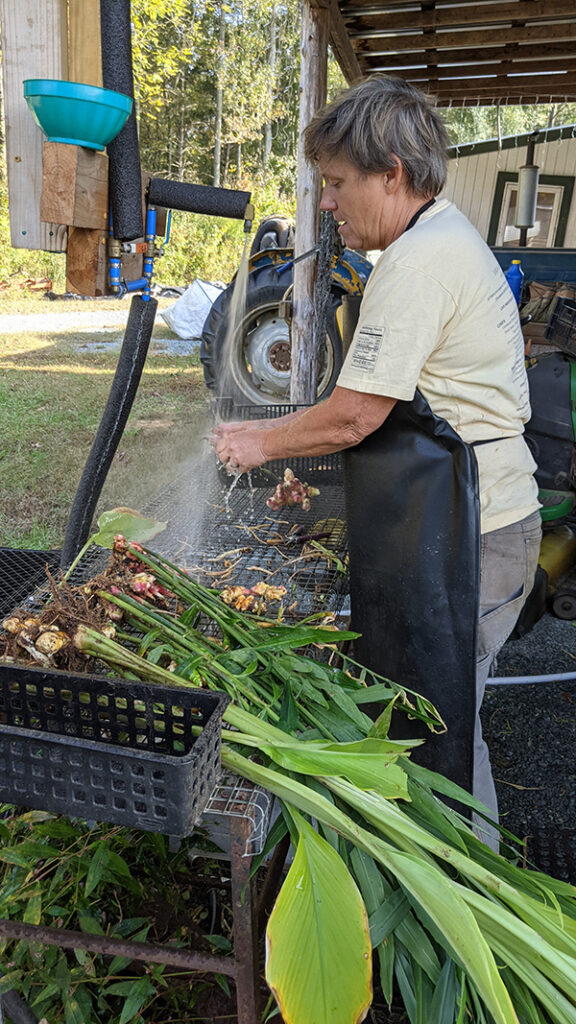 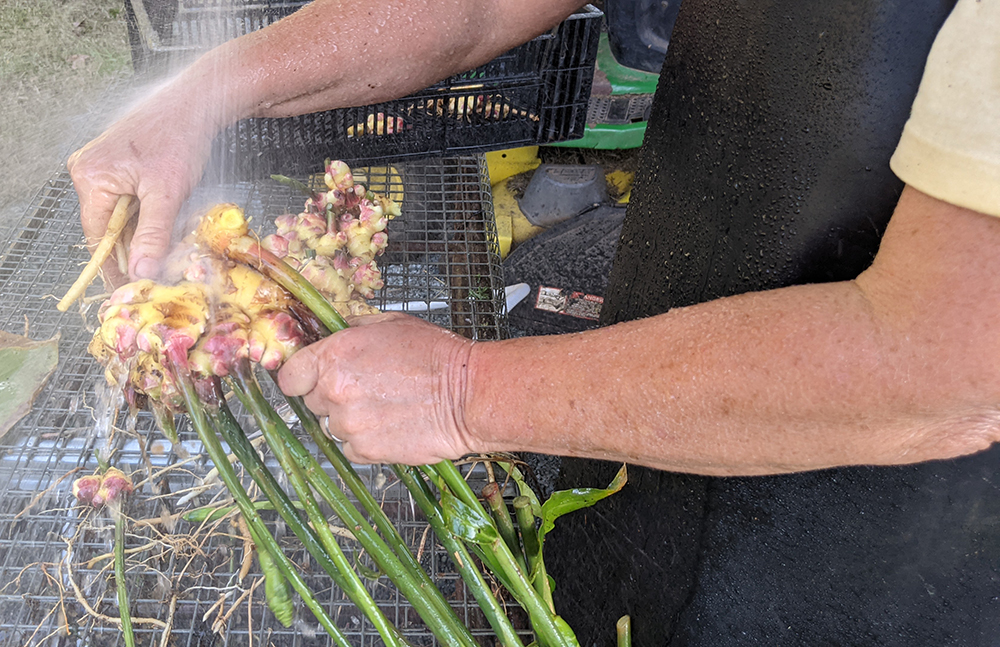 The ginger and turmeric are washed and trimmed after harvest. Photo by Debbie Roos. 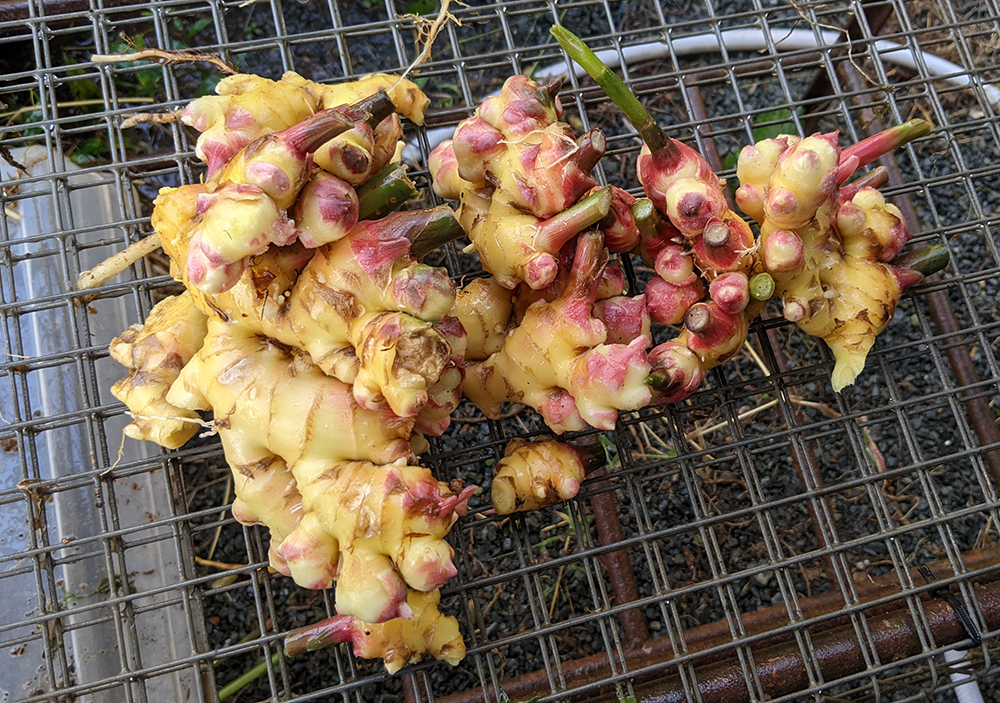 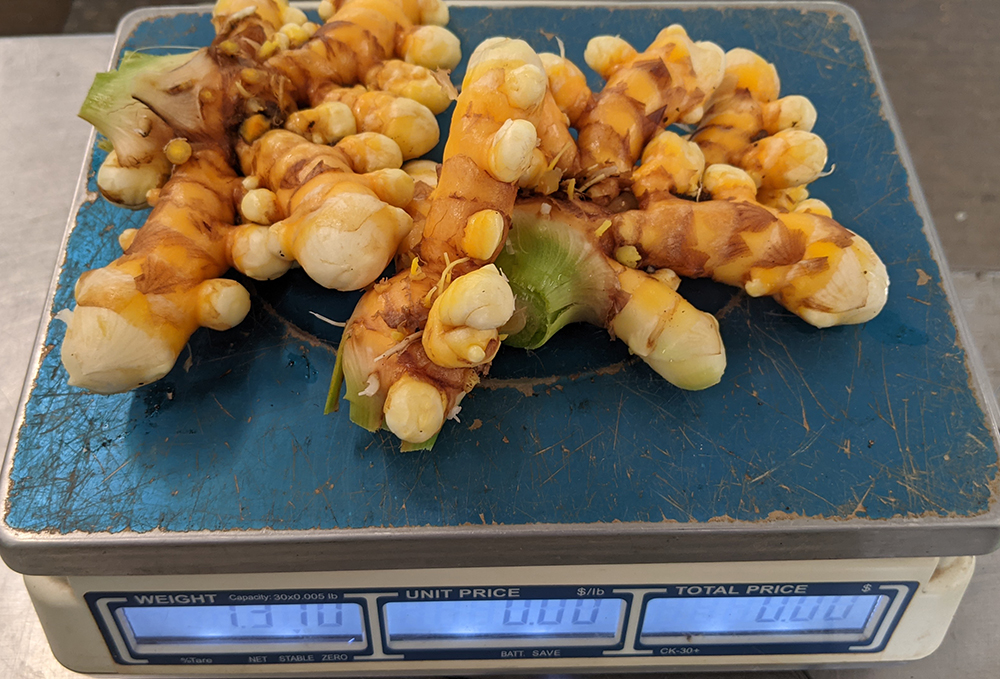 The harvest is weighed and recorded. Photo by Debbie Roos. 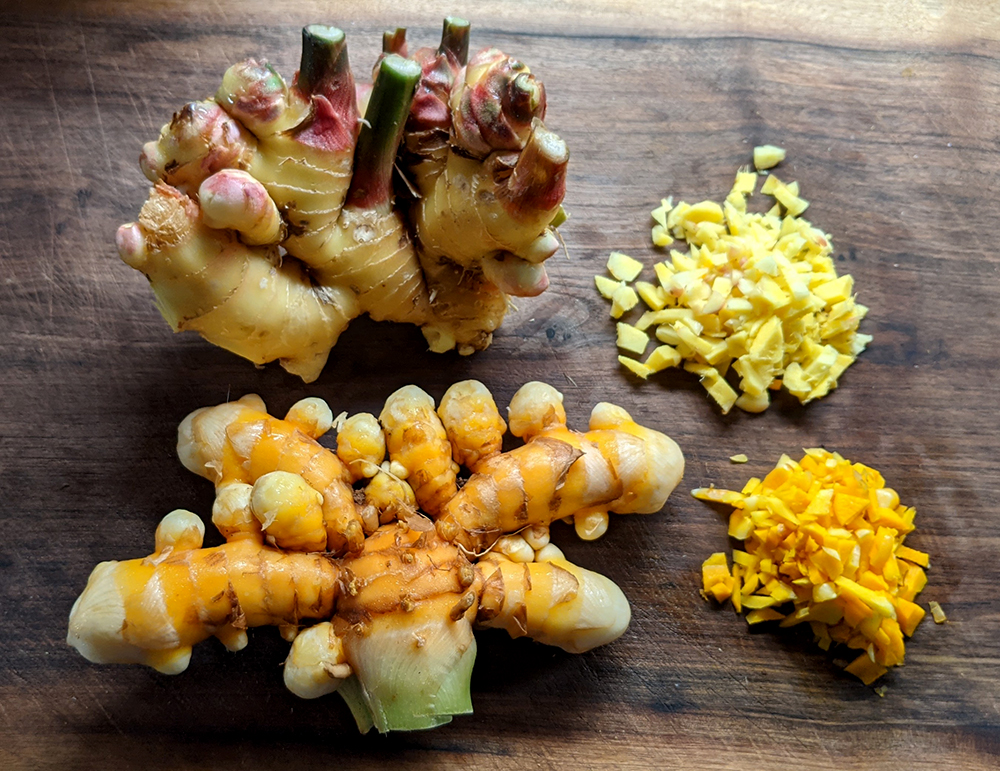