Find this article at:
go.ncsu.edu/readext?855566
— Written By Debbie Roos

Folks of all ages delight in finding praying mantids in the garden. These charismatic predators are large and easy to spot and have a reputation for being cool beneficial insects, helping to dispatch garden pests.

But what if I told you I have an annual early spring ritual where I devote time to purposely removing and destroying praying mantid egg cases from my pollinator garden?

Why would I want to remove praying mantid egg cases? Because unfortunately the most common praying mantid in most North Carolina landscapes is the invasive non-native Chinese mantid (Tenodera sinensis), and they can be a menace in the garden. They produce the egg cases that I seek out and destroy. 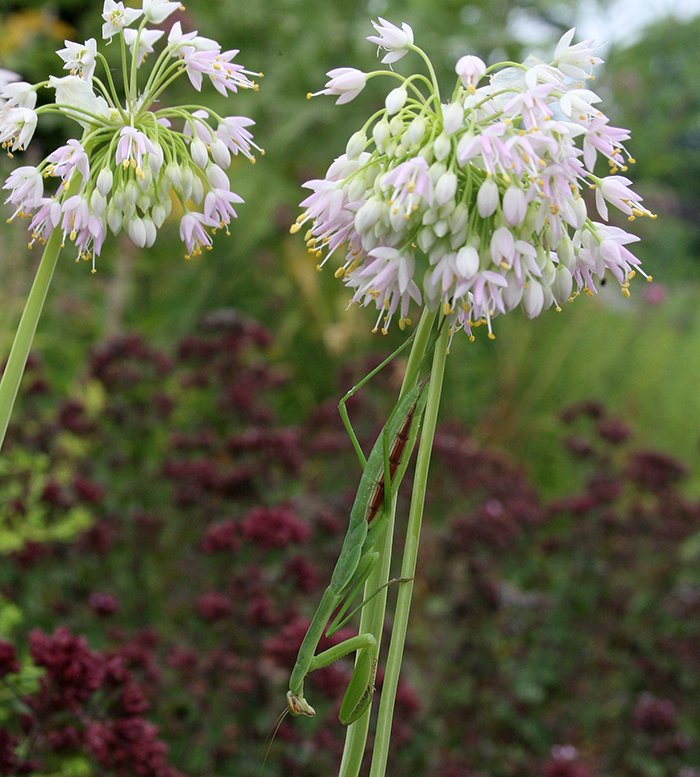 Chinese praying mantid on nodding onion in the pollinator garden. Praying mantids are ambush predators, relying on their camouflage to pounce on unsuspecting prey. They can rotate their head 180 degrees to search for prey! Photo by Debbie Roos.

North Carolina is home to both non-native and native mantid species. The native Carolina mantid (Stagmomantis carolina) is the only one I have personally seen and only infrequently because the Chinese mantids are so numerous and prey on them and directly compete with them for food. The northern grass mantid, or walkingstick mantid (Brunneria borealis), is also native to North Carolina. I am happy to discover native mantid egg cases in my garden but unfortunately I rarely find them. 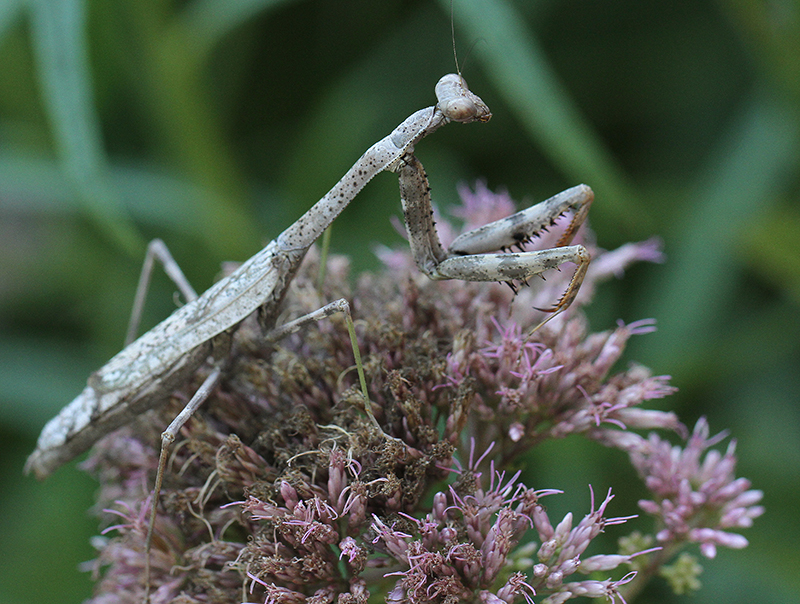 The Chinese mantid is not the only insect interloper. The non-native Japanese narrow-winged mantid (Tenodera angustipennis) and the European mantid (Mantis religiosa) are both present in North Carolina but they are not common. The Chinese mantid was believed to have been accidentally introduced to the U.S. in 1896 on a shipment of plants to Pennsylvania. The European mantid was accidentally introduced a few years later but then in the 1930s the egg cases were purposely imported to be sold for garden pest control and as a biological control agent for the spongy moth in the eastern U.S. Even today, Chinese, European, and Carolina mantid egg cases are commonly sold online and by garden supply stores as natural pest control agents.

All praying mantids are indiscriminate ambush predators and will consume anything they can capture. They do not distinguish between “good” and “bad” insects when searching for a meal which is why they are not useful for pest management. Because the Chinese mantids are so large and abundant they kill bees, butterflies, mice, small reptiles and amphibians, and even birds. In fact, Chinese mantids have been documented feeding on over 20 species of small birds, including hummingbirds. 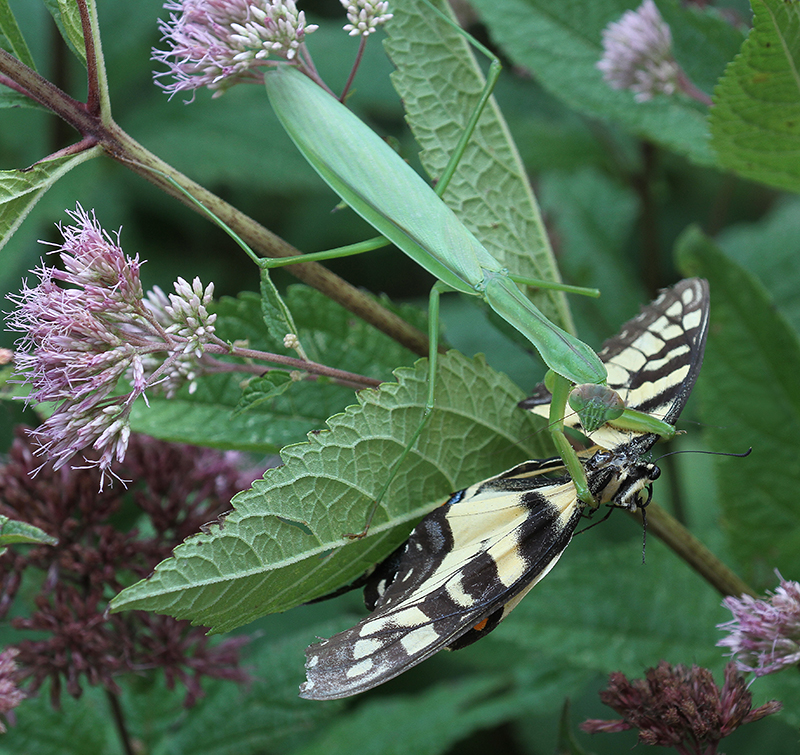 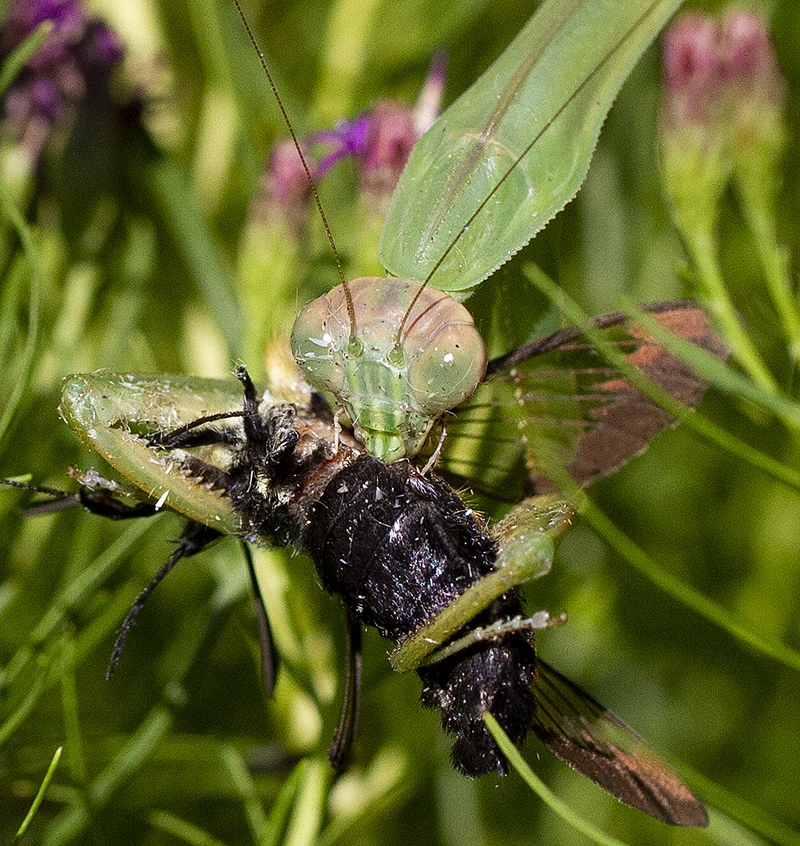 Chinese praying mantid feeding on a hummingbird moth on threadleaf ironweed. Sharp spines on the forelegs enable the mantid to securely hold on to their prey while feeding. Photo by Debbie Roos.

Praying mantids undergo incomplete metamorphosis with three distinct life stages: egg, nymph, and adult. The egg cases (oothecae) of Carolina and Chinese mantids are quite distinct: the Carolina mantid egg case is elongated, slender, and gray-brown with a white midrib. The Chinese mantid egg case is larger, beige, and shaped like a round-edged cube. The egg cases are formed in late summer/fall and can be found attached to a variety of shrubs, herbaceous perennials, and even inanimate objects like fence posts. They are easy to spot in the winter on the stems of plants that have died back or lost their leaves. Nymphs hatch from the egg cases in late spring and resemble tiny wingless adults. The nymphs will molt several times throughout the summer and form wings before reaching maturity. 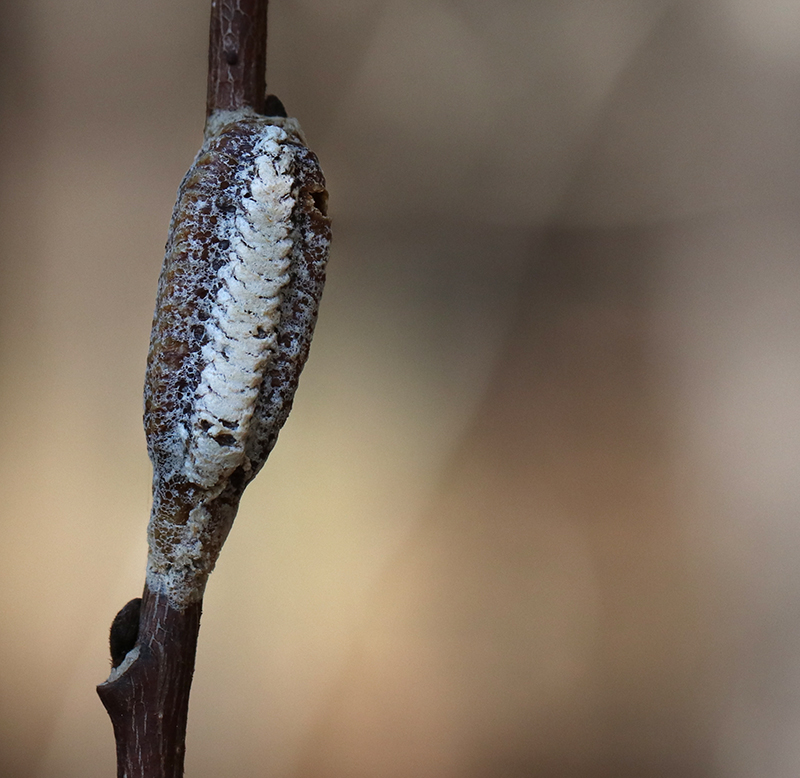 Egg case, or ootheca, of the native Carolina mantid. Photo by Debbie Roos. 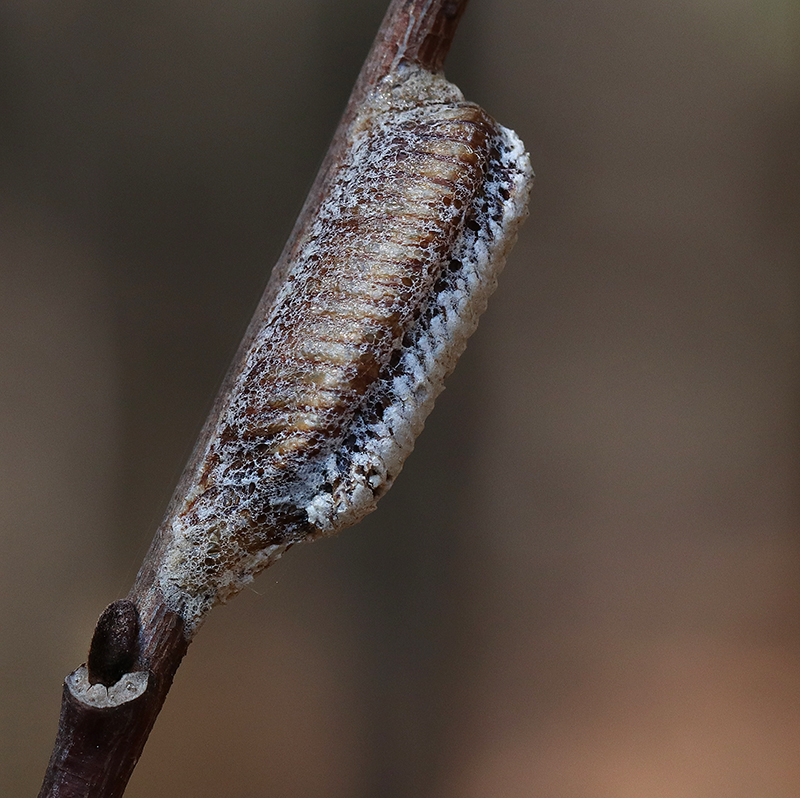 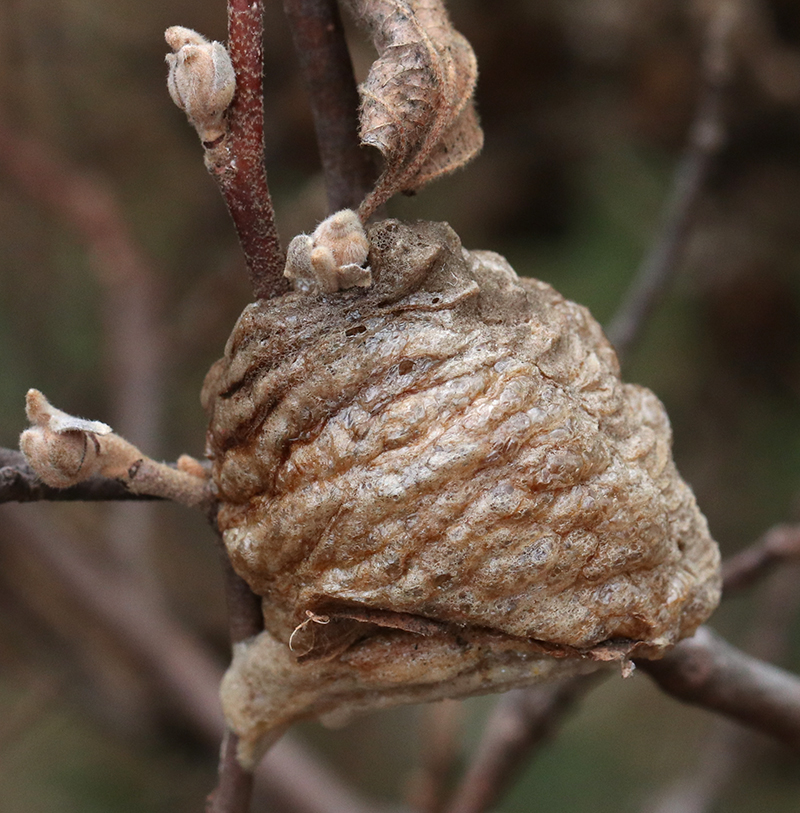 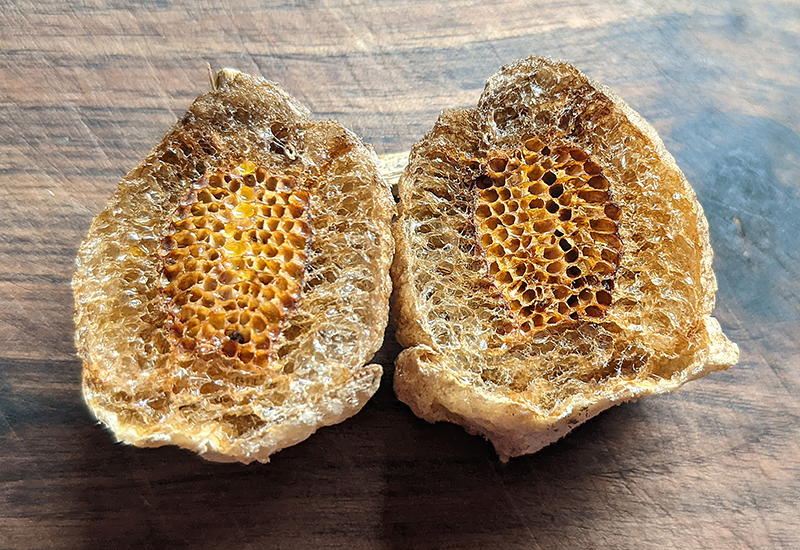 Cross-section of a Chinese praying mantid egg case showing the interior chambers where eggs are deposited. Photo by Debbie Roos. 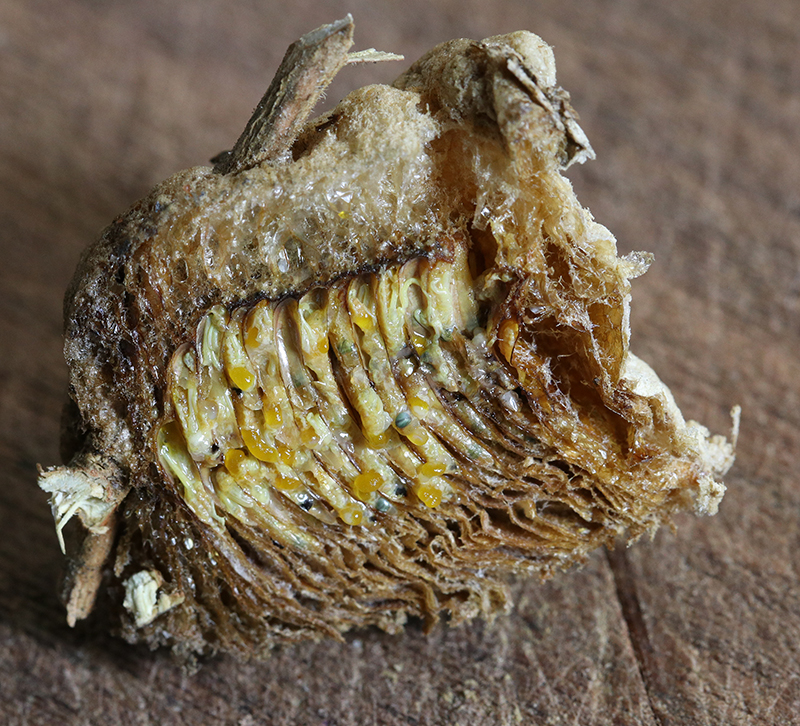 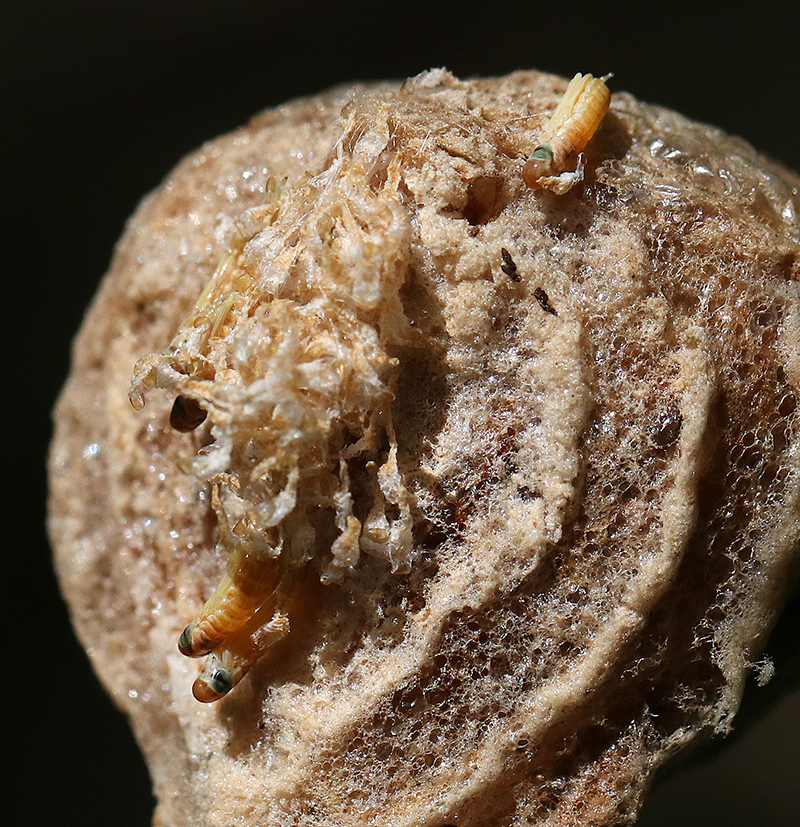 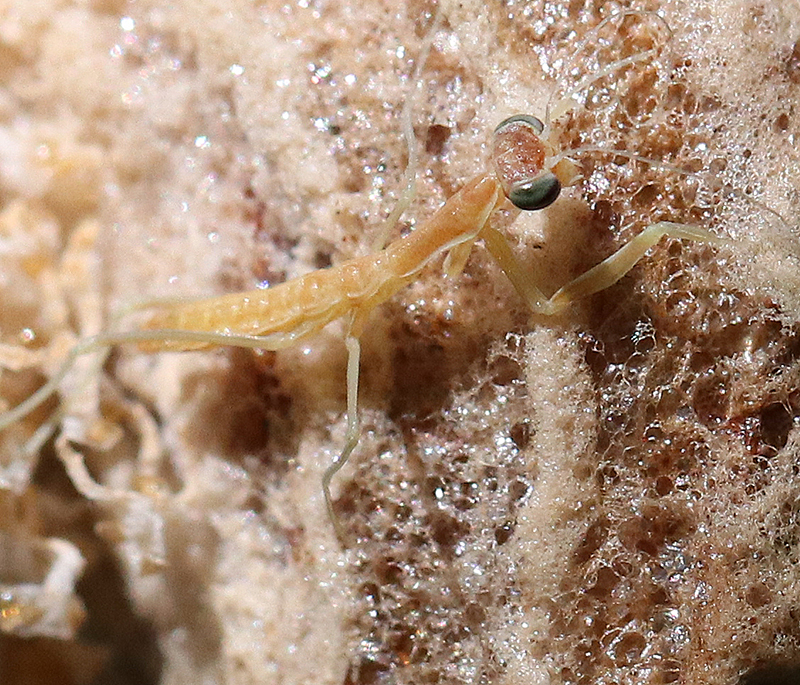 Newly emerged Chinese praying mantid nymph. Often their first meal is one of their siblings so they tend to disperse quickly. Photo by Debbie Roos.

I hope I have made it clear why I don’t want these Chinese mantids in my pollinator garden. It doesn’t make any sense to create habitat for pollinators and other beneficial insects, only to let these invasive predators undermine my efforts by feasting unchecked on the critters the habitat has attracted!

My strategy for reducing the population of Chinese mantids in my garden is to remove and destroy as many egg cases as I can find to prevent the nymphs from hatching into the garden. This can be done anytime between fall and spring, and I usually do it during the annual plant cutback in March.

Once you know how to identify the egg case of the Chinese mantid it is quite easy to spot them. Just last week I grabbed my pruners and went on the hunt and found 33 egg cases in less than 30 minutes in the pollinator garden. I can’t tell you how satisfying that was, kind of like hunting for drab-colored Easter eggs! In total we have found around 75 of them so far this year but I have not even searched yet through all the beds so there are many more to be found. I plan to do so before the end of the month before they start hatching. 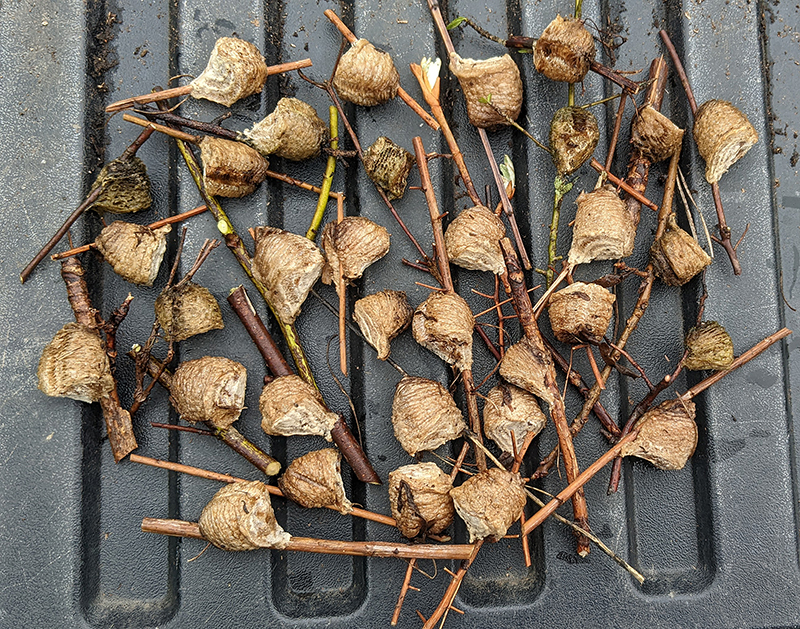 I found these 33 Chinese praying mantid egg cases in less than 30 minutes in my pollinator garden. I walked through my garden, pruners in hand, and snipped them from shrubs like New Jersey tea, oakleaf hydrangea, and Virginia sweetspire as well as herbaceous perennials like bluestar, beebalm, and aromatic aster. Photo by Debbie Roos.

Once you remove the egg cases you have to figure out what to do with them. A few years ago I saw a photo taken by a North Carolina birder of a downy woodpecker feeding on a Chinese mantid egg case attached to a branch and that gave me an idea. I now regularly attach the egg cases to my suet feeder at home for the woodpeckers to snack on! You can also feed them to your chickens if you have them. Sometimes I cut them in half with my pruners to expose the inside and submerge them in water for a few days. Otherwise use your creativity to figure out how to destroy them to prevent the nymphs from hatching. 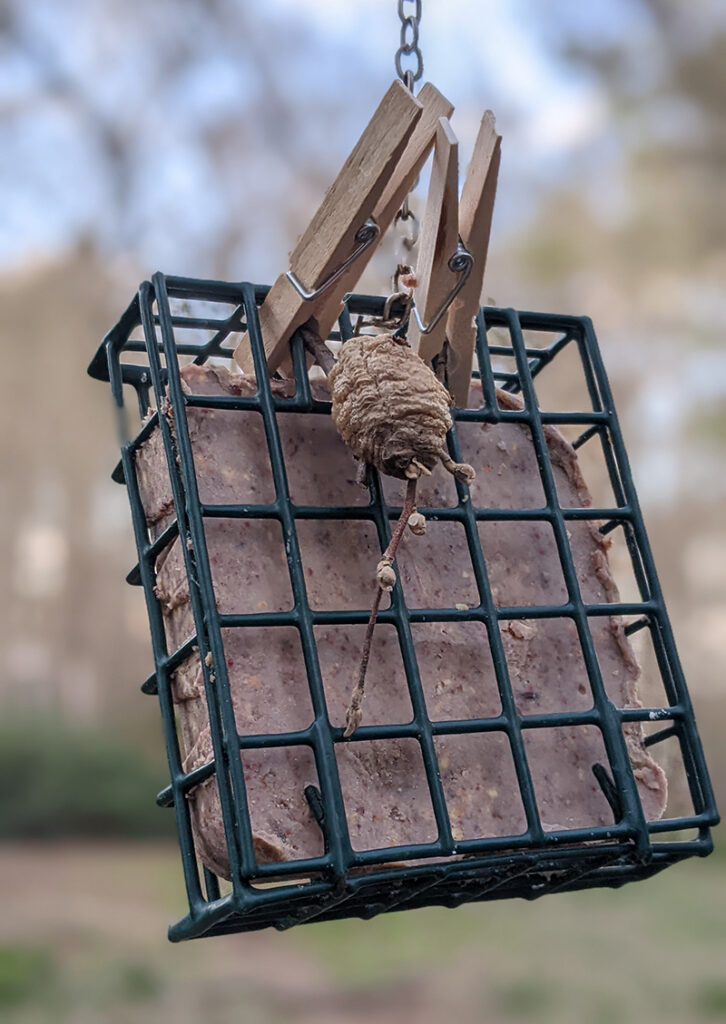 Once I learned that downy woodpeckers enjoy snacking on Chinese praying mantid egg cases I started attaching them to the suet feeder in my bird feeding station. Photo by Debbie Roos. 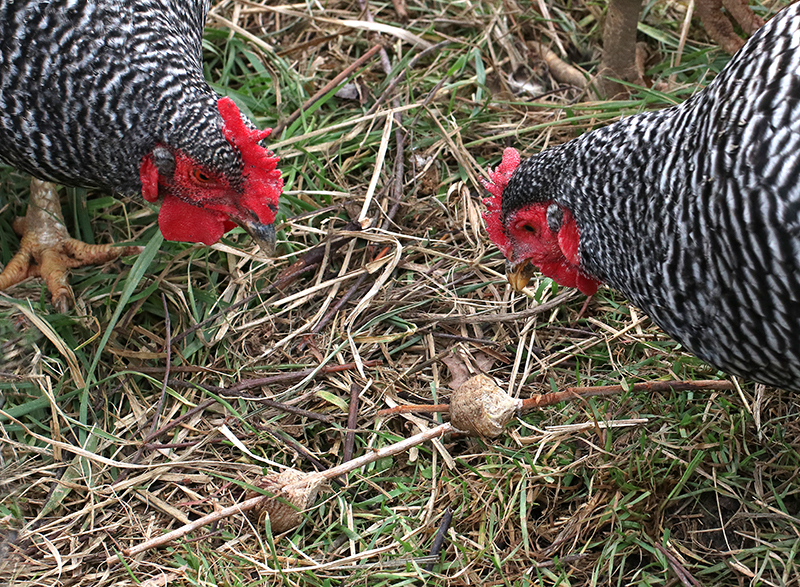 These Barred Rock hens enjoyed pecking at the Chinese mantid egg cases I threw into their pen at a friend’s farm. Photo by Debbie Roos.

My hope is by removing Chinese mantid egg cases every year I can keep the population low and create a more favorable environment for native insects including the Carolina mantid. Yes, they are also indiscriminate predators, but they are native and thus “belong” here and due to their much smaller size have much less of an impact than the invasive mantids.

It’s not possible to eradicate the Chinese mantids since they are capable of flying and can move in from outside the garden. But the annual removal of egg cases can certainly reduce predation pressure and help maintain balance.

Visit the Growing Small Farms website for information on the Pollinator Paradise Garden in Pittsboro.