Find this article at:
go.ncsu.edu/readext?828978
— Written By Debbie Roos

The NC Farm School is a Cooperative Extension entrepreneurial program for new and transitioning farmers with the mission of increasing the number of successful farmers in North Carolina. The school includes eight in-class sessions plus five farm field days. I am part of the team of Agriculture Agents conducting the 2021 Northern Piedmont Farm School. We take turns teaching classes…I taught the class on Developing your Market.

In between the two farm tours we convened at the Chatham County Agriculture & Conference Center for lunch and educational presentations. Gena Moore from Carolina Farm Stewardship Association talked about organic certification and Jody Moore (no relation!) of Rocky River Bee Farm talked about the Business of Bees.

Below are photos from the Chatham County Farm Field Day. 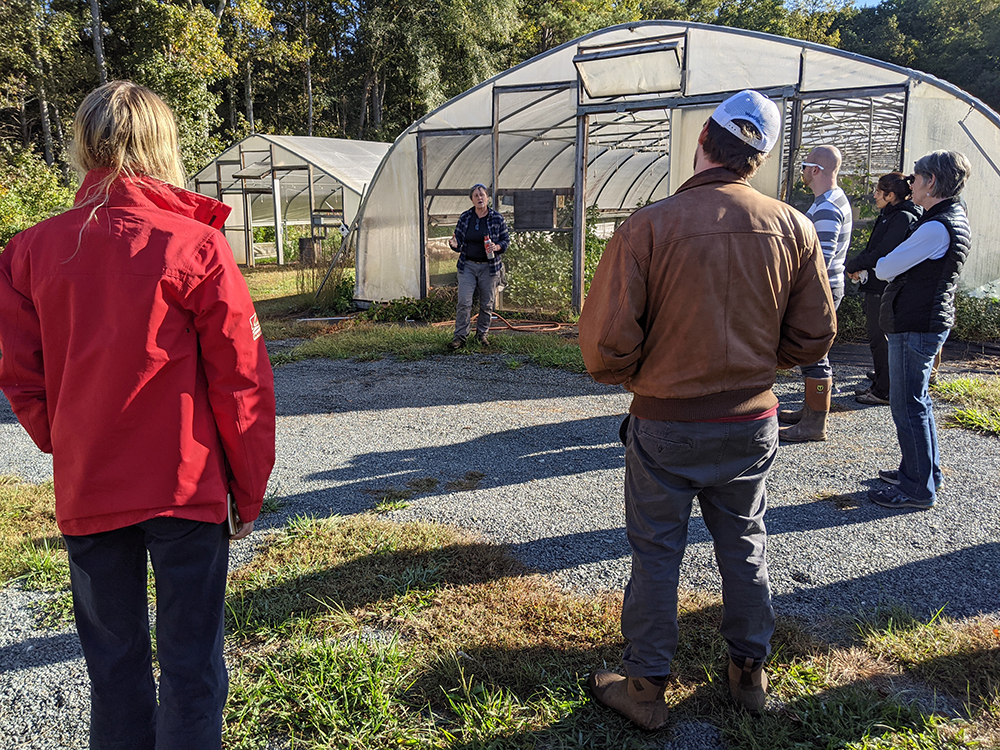 Meredith talks about her experiment growing sweetpotatoes in the high tunnel. She names all of her high tunnels after folks who have played a prominent role in building them and farming in them! Photo by Debbie Roos. 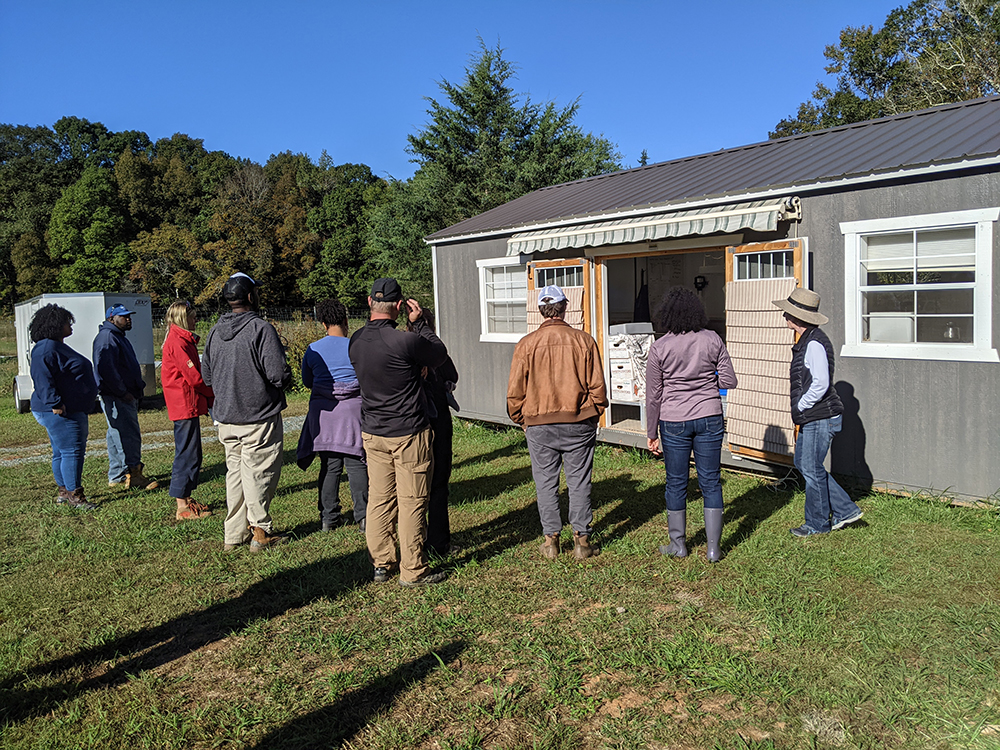 Farm School students learn about the new farm kitchen that Meredith constructed this year. The kitchen provides climate-controlled storage for crops that don’t need refrigeration like sweetpotatoes, pumpkins, and winter squash. All the greens are washed and dried in the kitchen. Photo by Debbie Roos. 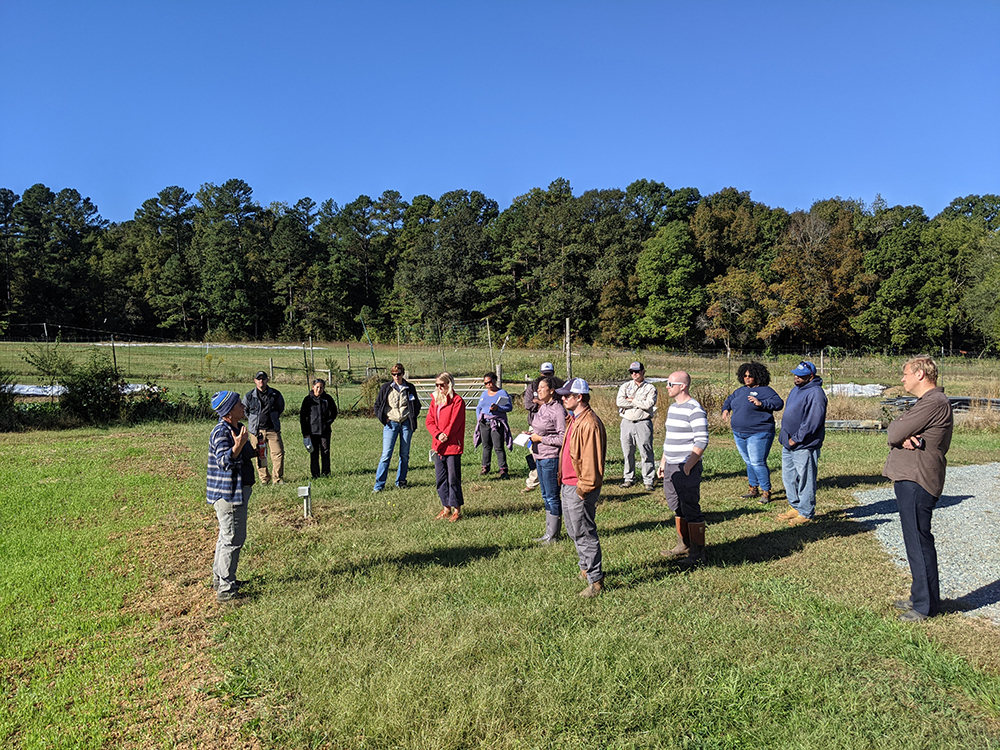 Meredith discusses her cover crop rotations (wheat and crimson clover were seeded in the field behind her) where she is about to erect a new high tunnel. All but one of her high tunnels are old tunnels reclaimed from other farmers who no longer used them. Photo by Debbie Roos. 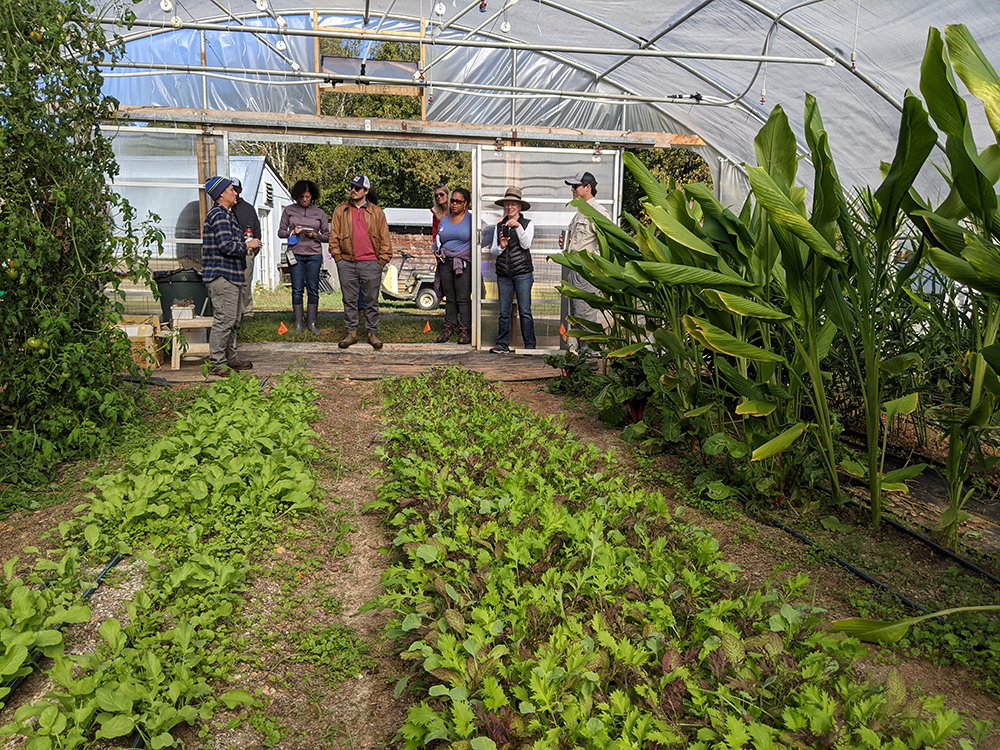 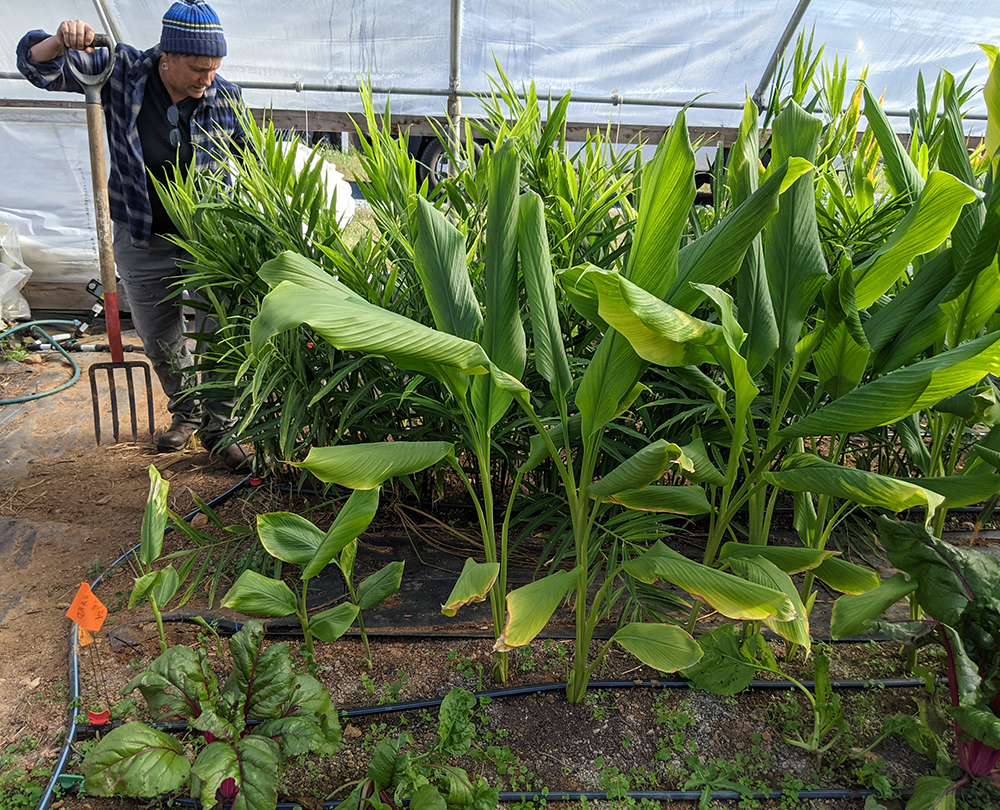 Meredith digs some of the ginger crop. Photo by Debbie Roos. 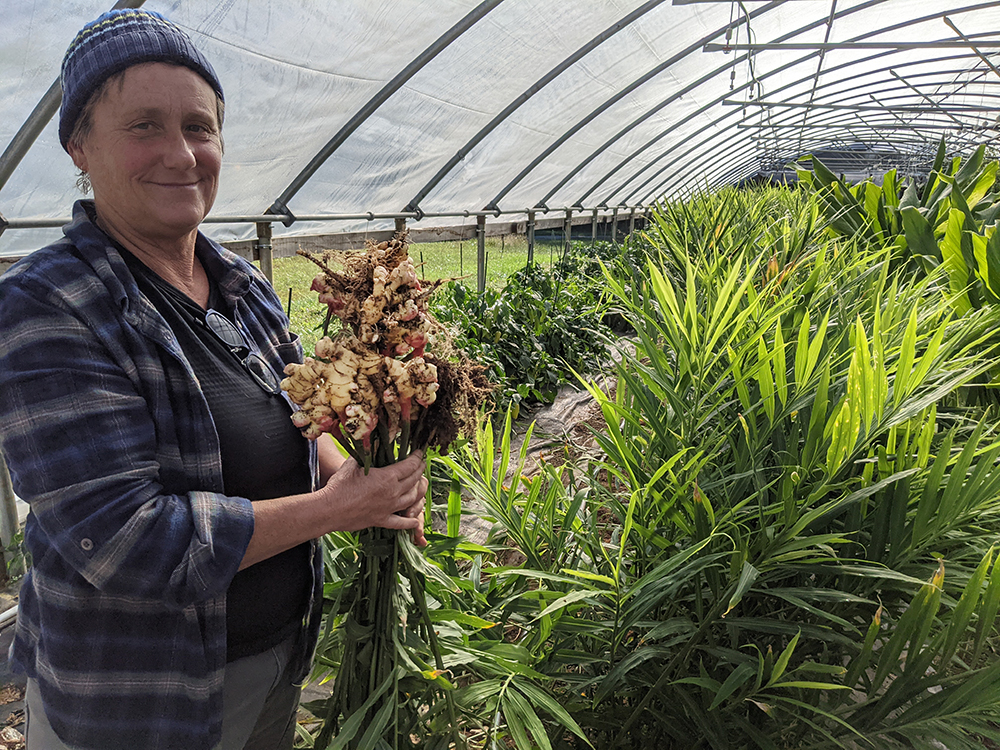 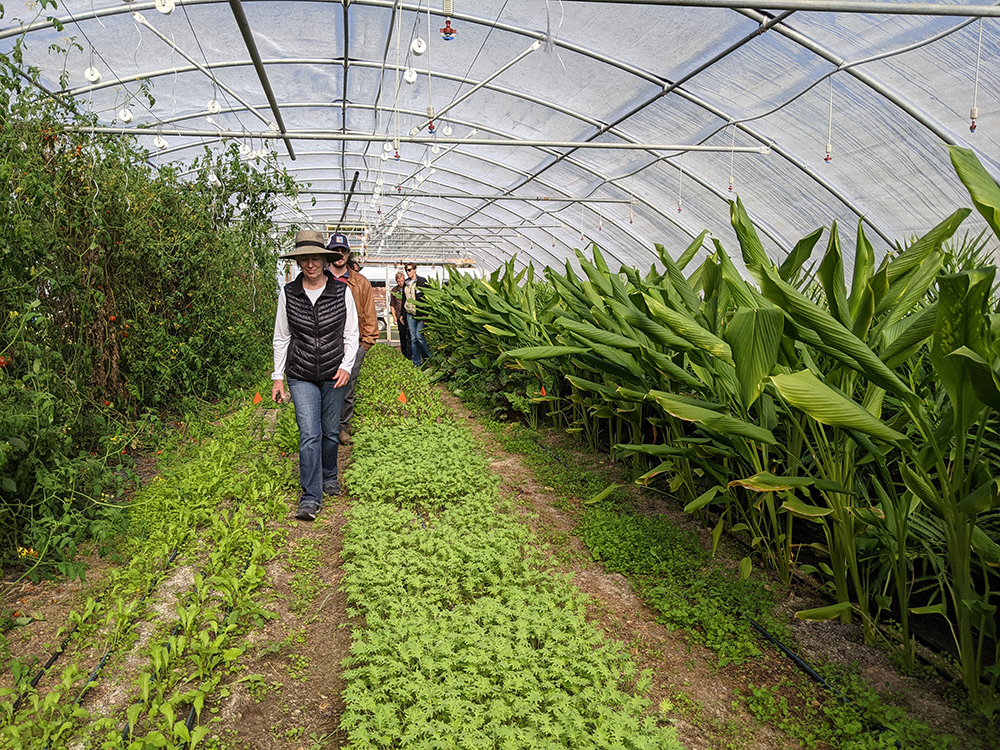 Look at that beautiful turmeric on the right! Photo by Debbie Roos. 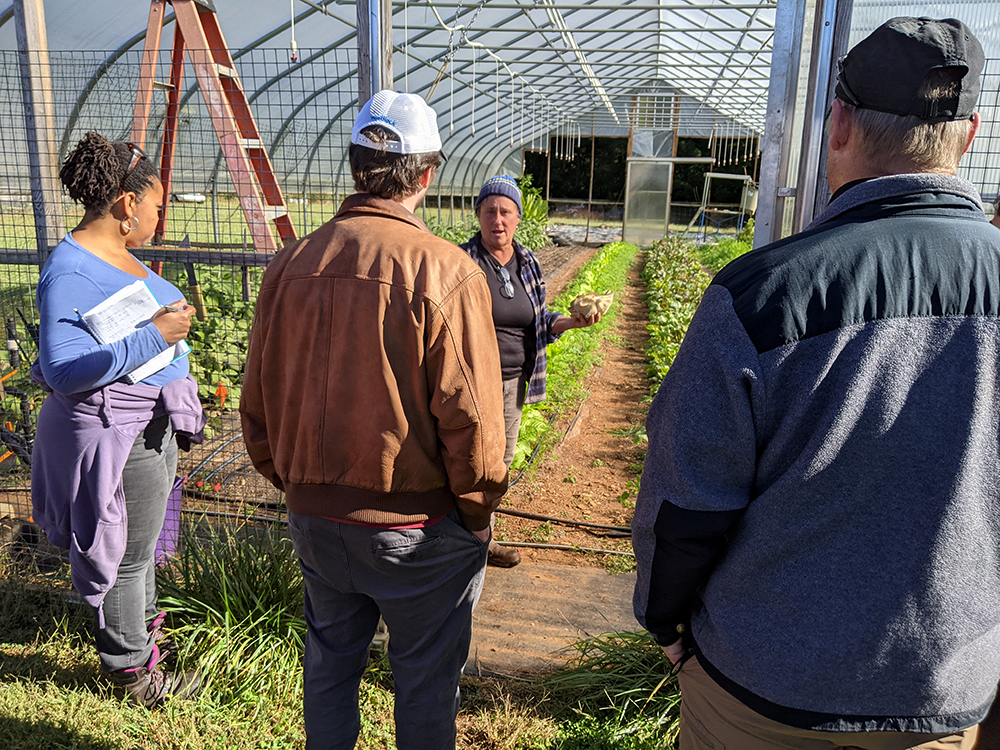 This is a different high tunnel that has overwintered turmeric plus carrots, beets, salad mix, and eggplant. Photo by Debbie Roos. 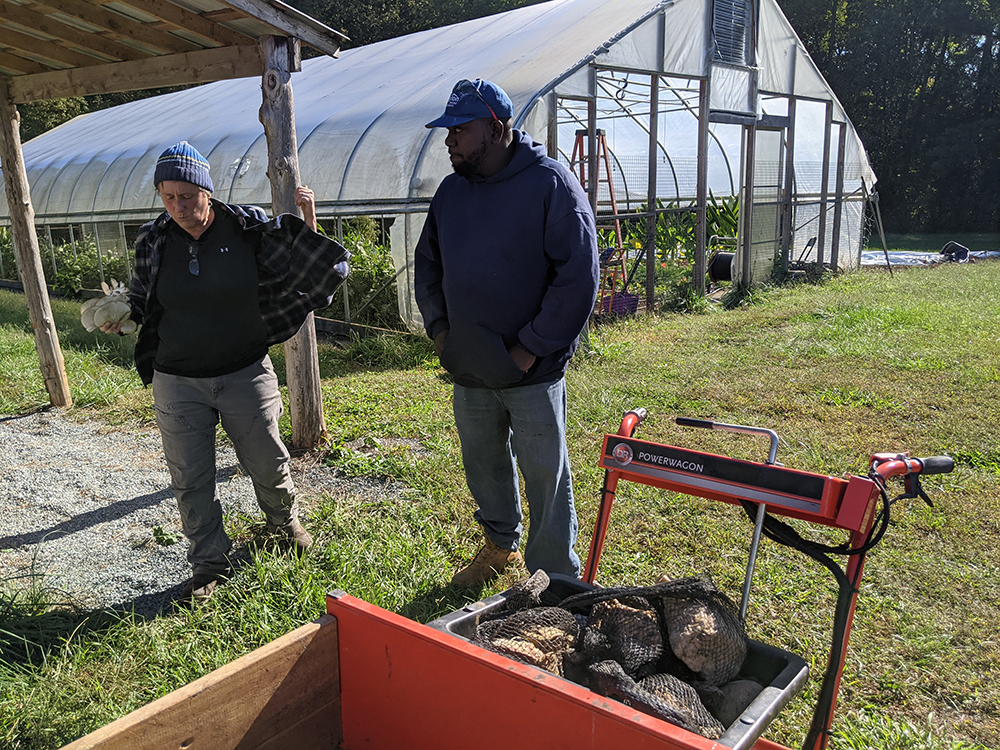 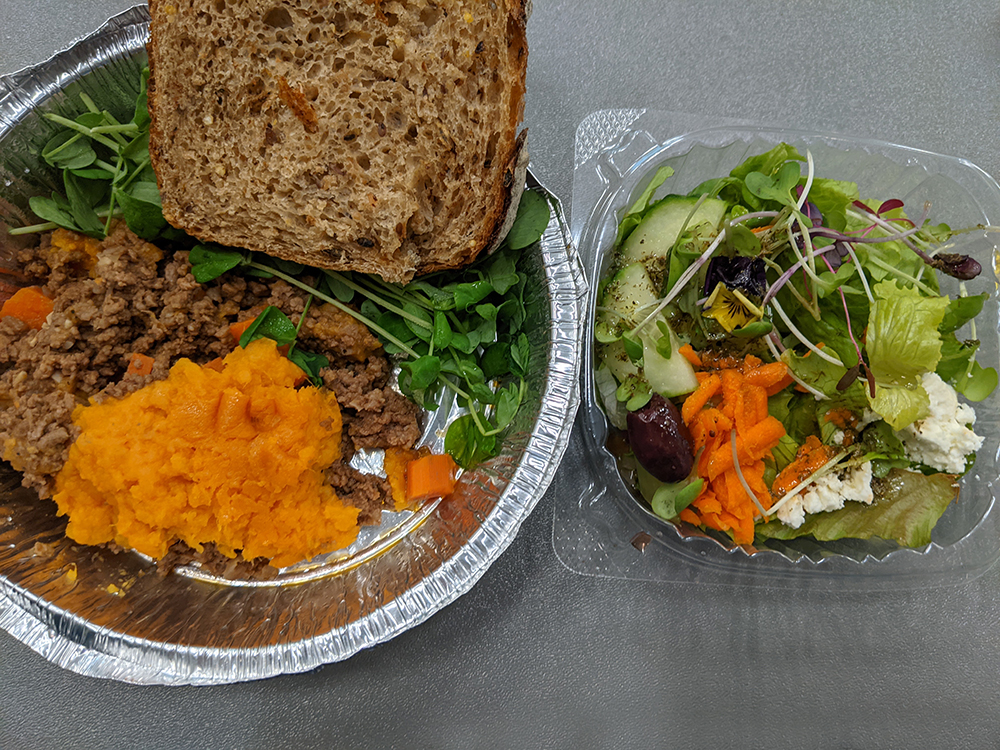 The locally sourced sweetpotato shepherd’s pie and salad from Angelina’s Kitchen was delicious! We also got bread from Chicken Bridge Bakery, one of Angelina’s famous olive oil brownies and local watermelon from Granite Springs Farm! Photo by Debbie Roos. 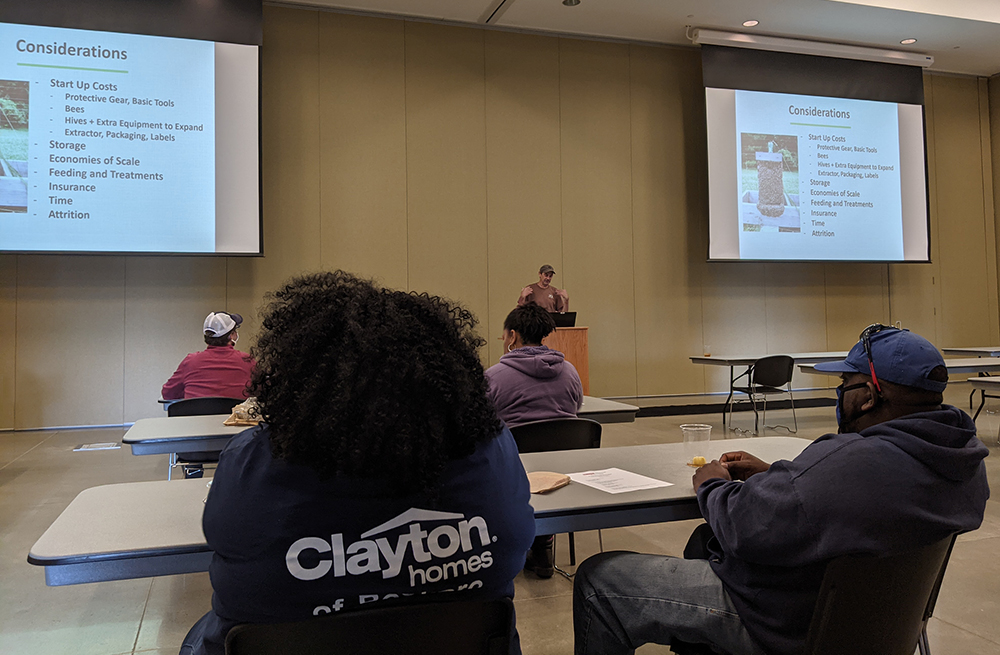 Chatham County beekeeper Jody Moore of Rocky River Bees talks about the Business of Bees during the lunch program. Photo by Debbie Roos. 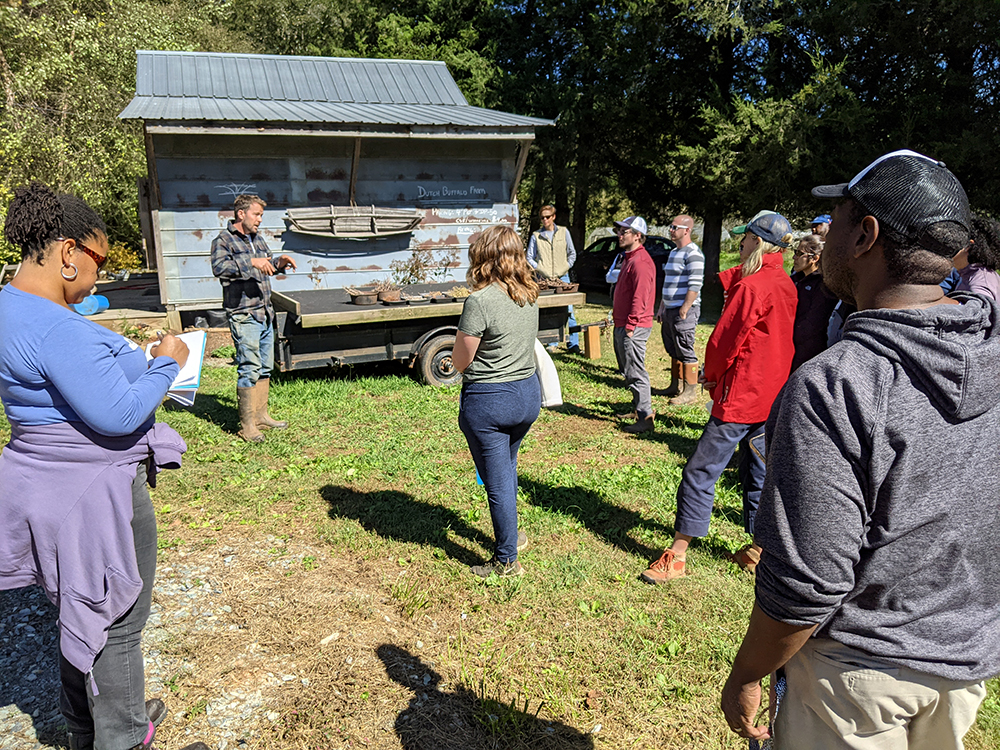 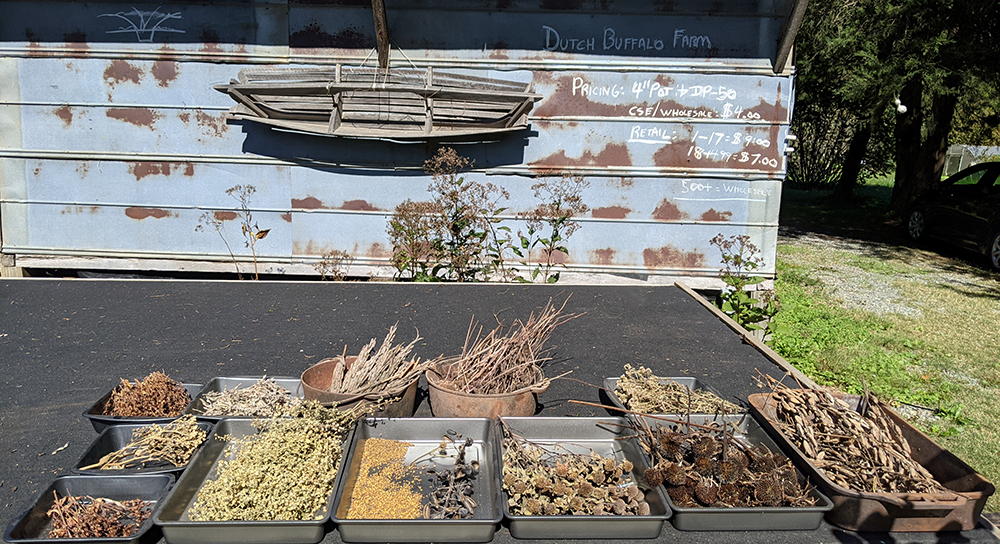 Farrell set out some of the seedheads that he wild-collects, including Carolina lupine, wild indigo, skullcap, mountain mint, coneflower, and more. Photo by Debbie Roos. 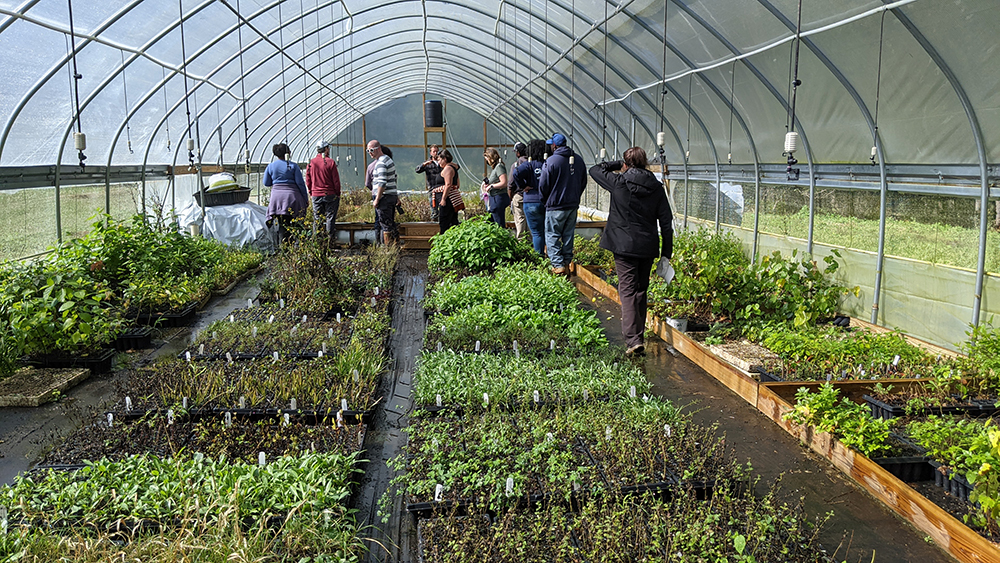 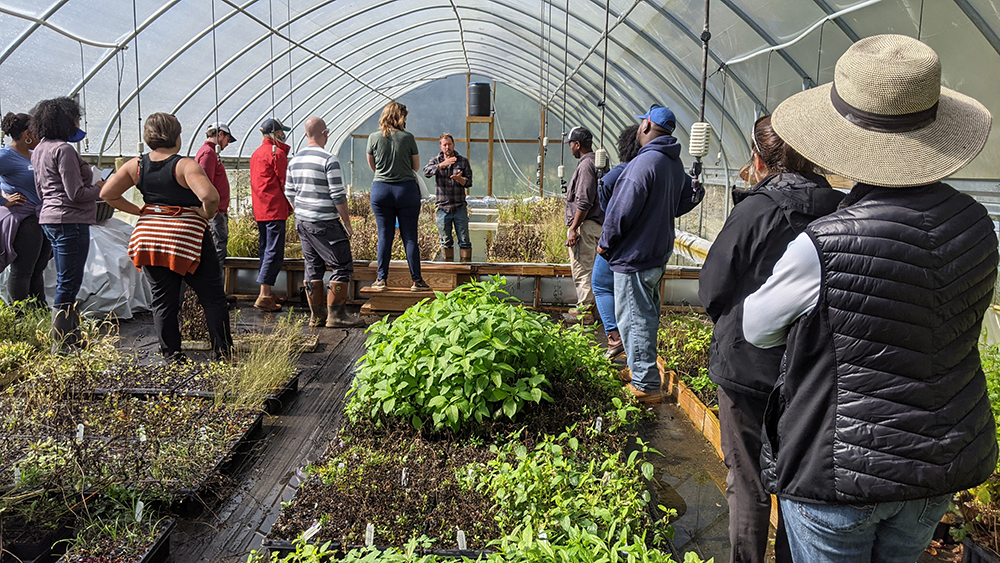 Farrell has set up a unique float propagation system. He direct seeds into styrofoam trays that float on 14,000 gallons of water. It makes it much easier to keep seedlings small at low fertility when they are floating on a column of clean water. When he sells the plant he pots it up and six weeks later it’s well-rooted and retail-ready. It’s also easier to keep plants cool in the summer because cool water from the well is pumped into the tank while sun-warmed water is pumped outside for irrigation. Photo by Debbie Roos. 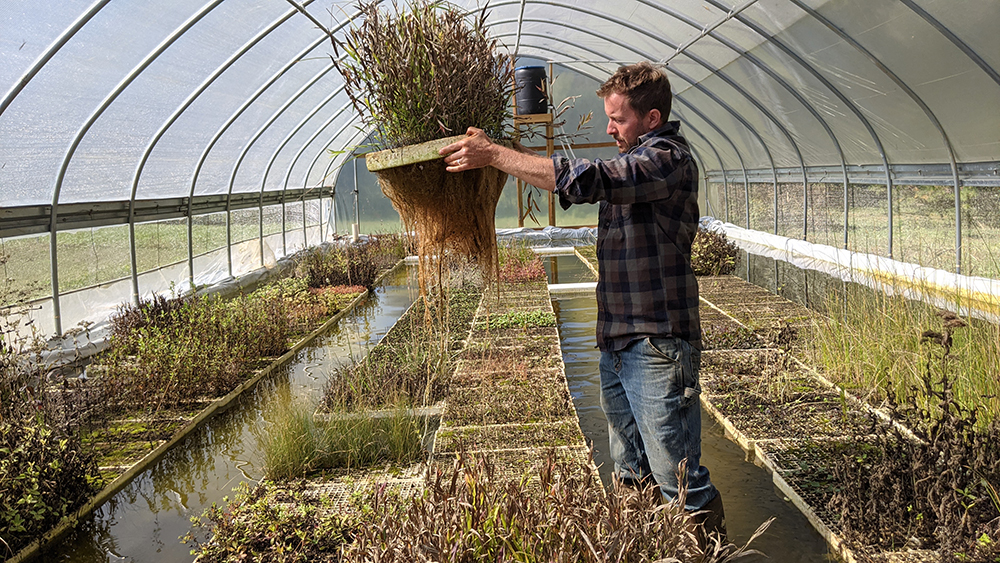 Farrell shows the roots from a tray of river oats. These roots will be pruned when the plants are potted up for sale. Photo by Debbie Roos. 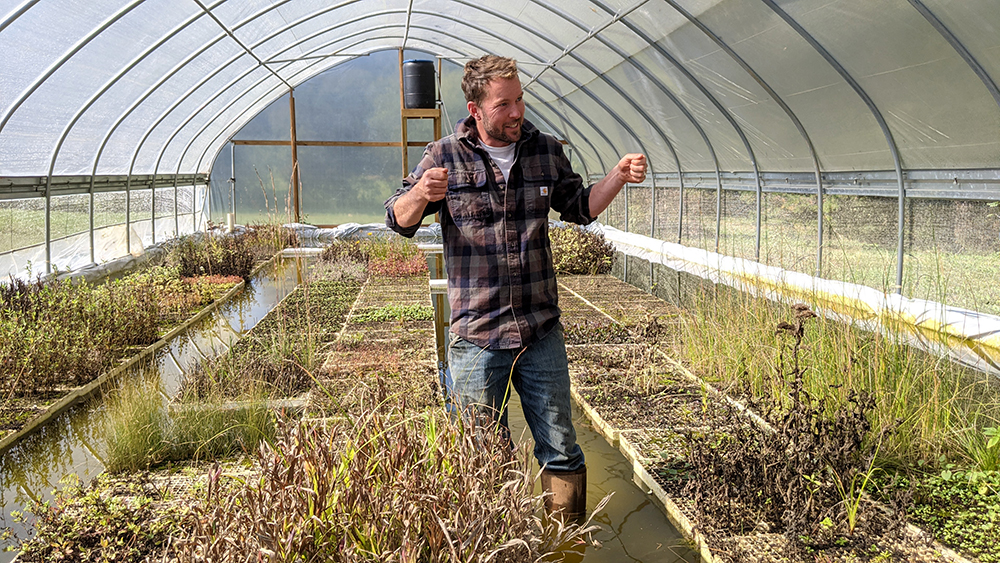 The students had lots of great questions for Farrell and he enjoyed sharing his knowledge and experience managing a nursery. Photo by Debbie Roos.