Find this article at:
go.ncsu.edu/readext?757241
— Written By Debbie Roos 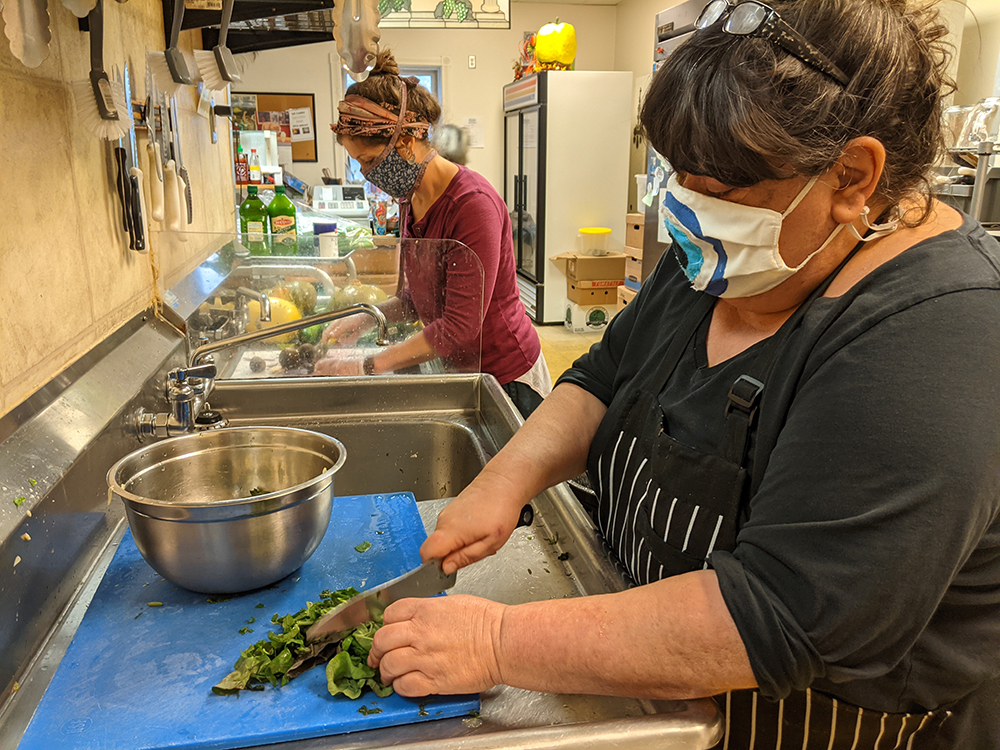 I have long known that Chatham County is a special place with an amazing community of creative, passionate people who are always willing to contribute to their community. I’m excited to share the most recent example of this, a brand new organization calling itself Robin Hood’s Kitchen which is already making a difference in improving nutrition among the food insecure while also reducing food waste.

Robin Hood’s Kitchen is the brainchild of Danielle McComas and Moya Hallstein who saw an opportunity and a need and pulled together a team of volunteers to create a solution. Danielle is a nurse who also volunteers by staffing a booth for the CORA Food Pantry every Thursday at the Pittsboro Farmers’ Market. Every week she accepts cash and donated food items from customers at the market, then uses the cash to buy from market vendors and takes these items to the CORA Food Pantry to give out to clients. Danielle had noticed the long lines of people waiting to get food at CORA and had been thinking about what she could do to help beyond what she was doing at the farmers’ market.

Danielle started talking with Moya Hallstein about what they could do. Moya works part-time at In Good Heart Farm outside Pittsboro and sometimes helps them out at the farmers’ market. Moya had been thinking about what could be done with the items that were leftover from the farmers’ markets and also the vegetables that may not have been as marketable due to harvest injury, bug damage, tip burn, etc. There was also an abundance of “weird” vegetables, things like escarole and radicchio, that were prized by certain clientele at the markets but would have been unfamiliar to others who wouldn’t know how to prepare them.

Danielle and Moya discussed how to bridge the gap between food insecurity in the county and the surplus of locally grown vegetables that was going to waste. How do you get these vegetables to hungry people? You put them in a soup! Once they had that epiphany the ball started rolling quickly. Their next step was to talk with local chef Angelina Koulizakis of Angelina’s Kitchen in Pittsboro. Angelina is famous for sourcing the majority of her foods from local farmers and serving up nutritious and delicious food to a loyal following of customers. She is also famous for her big, generous heart, and she offered up her kitchen for the meal preparation. Sarah Sligh works at Angelina’s Kitchen and also joined the team.

Danielle, Moya, Angelina, and Sarah recruited a few volunteers and cooked up their first meals on November 30. They got vegetables donated from In Good Heart Farm, Granite Springs Farm, Screech Owl Greenhouses, and The Plant Factory. Local co-op retailer Chatham Marketplace also donated generous amounts of produce. Once Angelina knows what is being donated for the week she decides on the menu. The first week Robin Hood’s Kitchen delivered 50 quarts of nutrient-dense soup and veggies to CORA.

The first week was such a success that they did it again on December 7. Again, farms stepped up to donate, as did Chatham Marketplace. A few people who had heard about the previous week donated eggs, other food items, and generous cash donations.

I learned that some farmers were donating not only their leftover, or “ugly” produce, but were harvesting crops specifically to donate to Robin Hood’s Kitchen. I visited farmer Meredith Leight at Granite Springs Farm in Pittsboro and saw her harvesting beautiful lettuce to be made into salads for Robin Hood’s Kitchen. “These are extraordinary times and a lot of people are struggling right now,” said Leight. “Many folks want to be able to help and do their part; this is one way I can help.” Angelina greatly appreciates Granite Springs Farms’ lettuce because it arrives pre-washed and takes minimal volunteer labor to turn it into beautiful salads.

I joined the Robin Hood’s Kitchen team at Angelina’s Kitchen on December 7 as they spent the day organizing donations, prepping vegetables, preparing quiche, soups, salads, and washing dishes. At the end of the day, they delivered to CORA 50 quarts of soup, 38 salads, 20 quiches, and a basket of veggies, all from recovered and donated produce!
I checked in with CORA to see what the Robin Hood’s Kitchen effort meant to them. I spoke with Rebecca Hankins, CORA’s Development & Communications Director, who told me that CORA has served 800 new families since March 2020, a 50% increase in the number of families served over the previous year. Those families have needed more assistance and they have seen a 137% increase in visits to all of their programs. CORA has provided 1.3 million meals across Chatham County this year.

Because of this increased need, “new partnerships, like the one with Robin Hood’s Kitchen, provide CORA with more resources that we can pass along to our neighbors in need,” Hankins shared. “Highly nutritious prepared meals are always greatly appreciated by our families. It’s wonderful to see community partners think outside the box; Robin Hood’s Kitchen brings farmers together and eliminates food waste, while simultaneously addressing food insecurity in our community. It’s just brilliant. As CORA expresses often and sincerely, we are so lucky to be part of this community of passionate and generous supporters.”

They are in the process of setting up Robin Hood’s Kitchen as a 501c3 organization but for now monetary donations can be in the form of cash or checks to Angelina’s Kitchen.
At this time they are accepting donations of staples such as olive oil, rice, noodles, canned tomatoes, and spices at Angelina’s Kitchen. If you would like to provide other items, email robinhoodskitchen@gmail.com and they will send you a specific “wish list”!
To sign up for volunteer shifts, send an email to robinhoodskitchen@gmail.com and provide your name, availability times (they can use help throughout the week), and the best way to contact you.
Follow Robin Hood’s Kitchen on Facebook!
Below are photos I took of the harvest and meal preparation on December 7, 2020, at Angelina’s Kitchen. 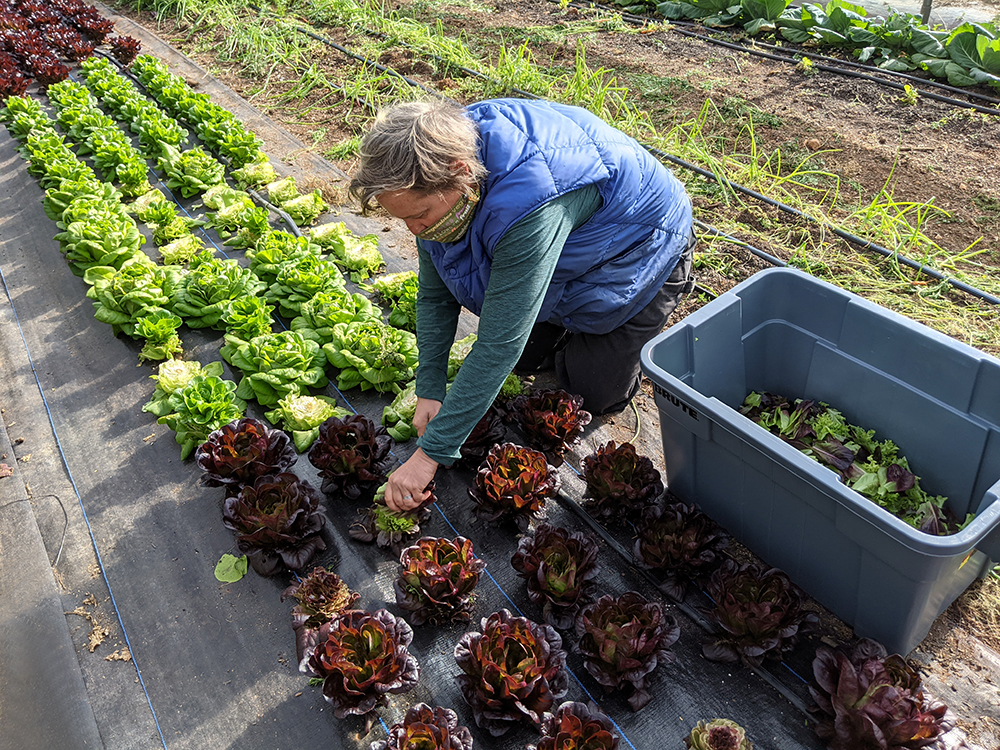 Meredith Leight harvests lettuce from one of the Granite Springs Farm high tunnels to donate to Robin Hood’s Kitchen. Photo by Debbie Roos. 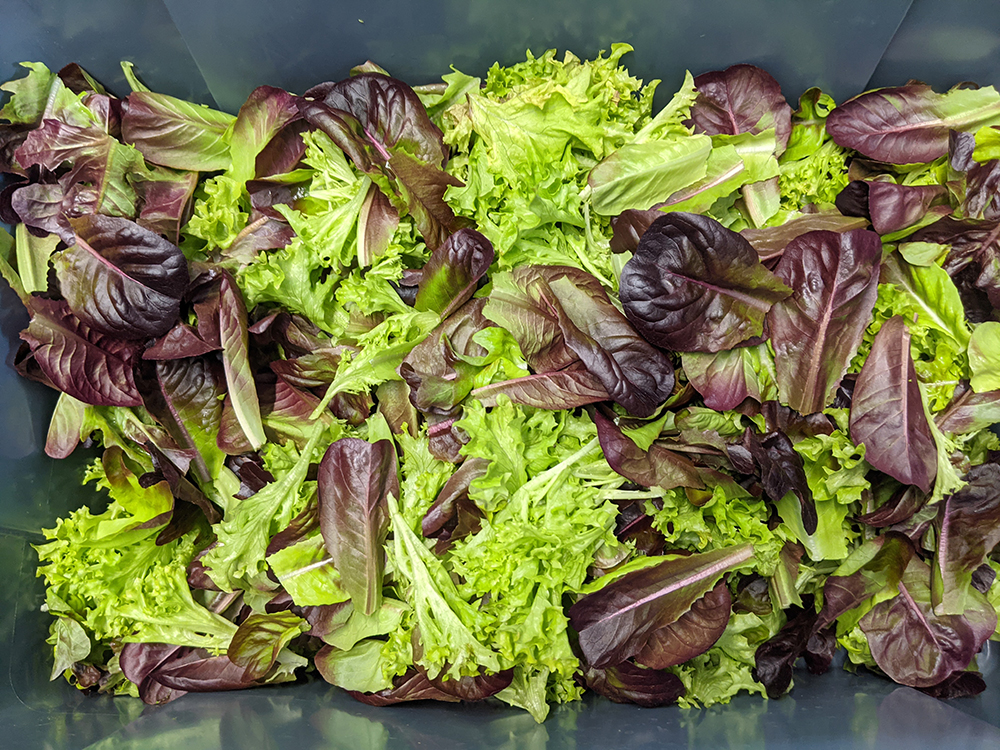 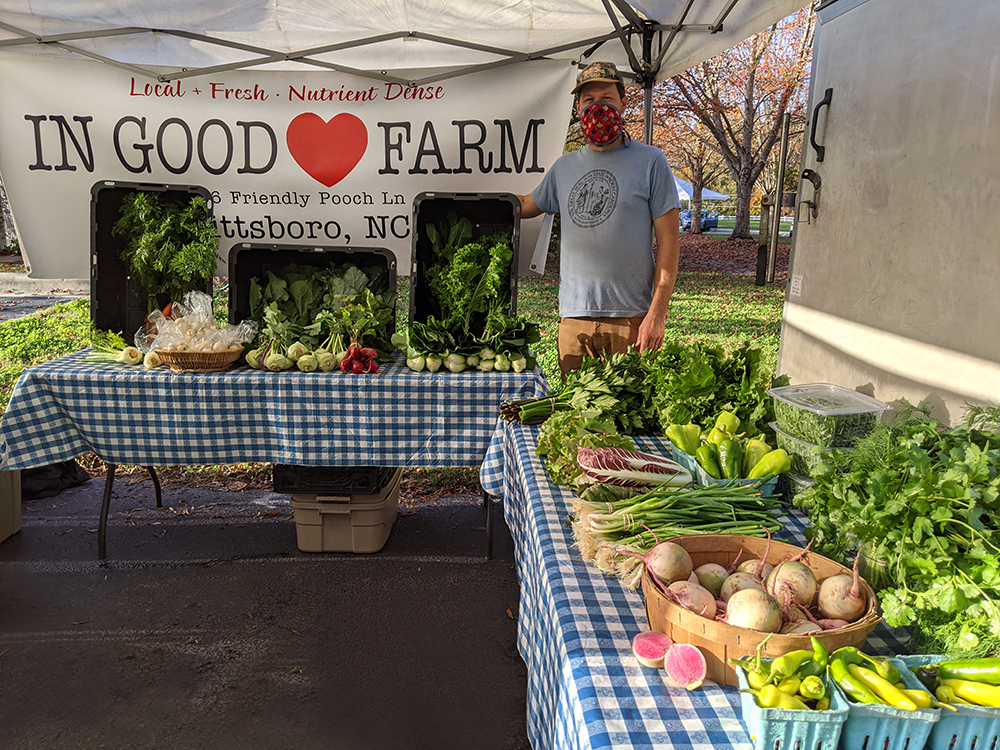 Farmer Ben Shields of In Good Heart Farm donates produce to Robin Hood’s Kitchen. Here he is at the Fearrington Farmers’ Market. Photo by Debbie Roos. 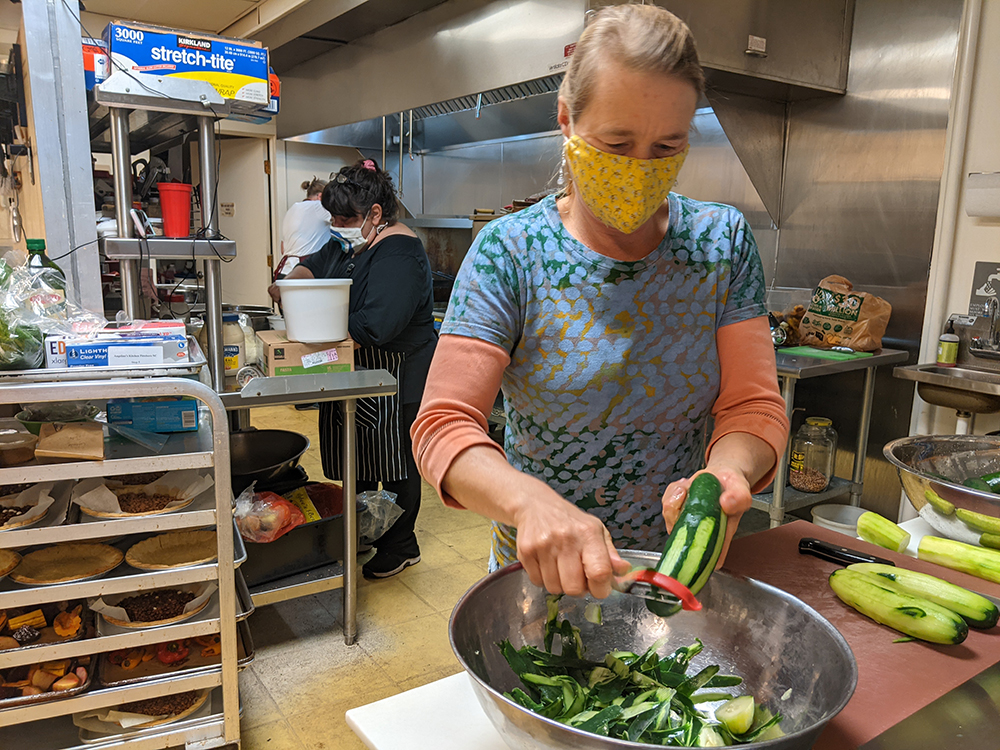 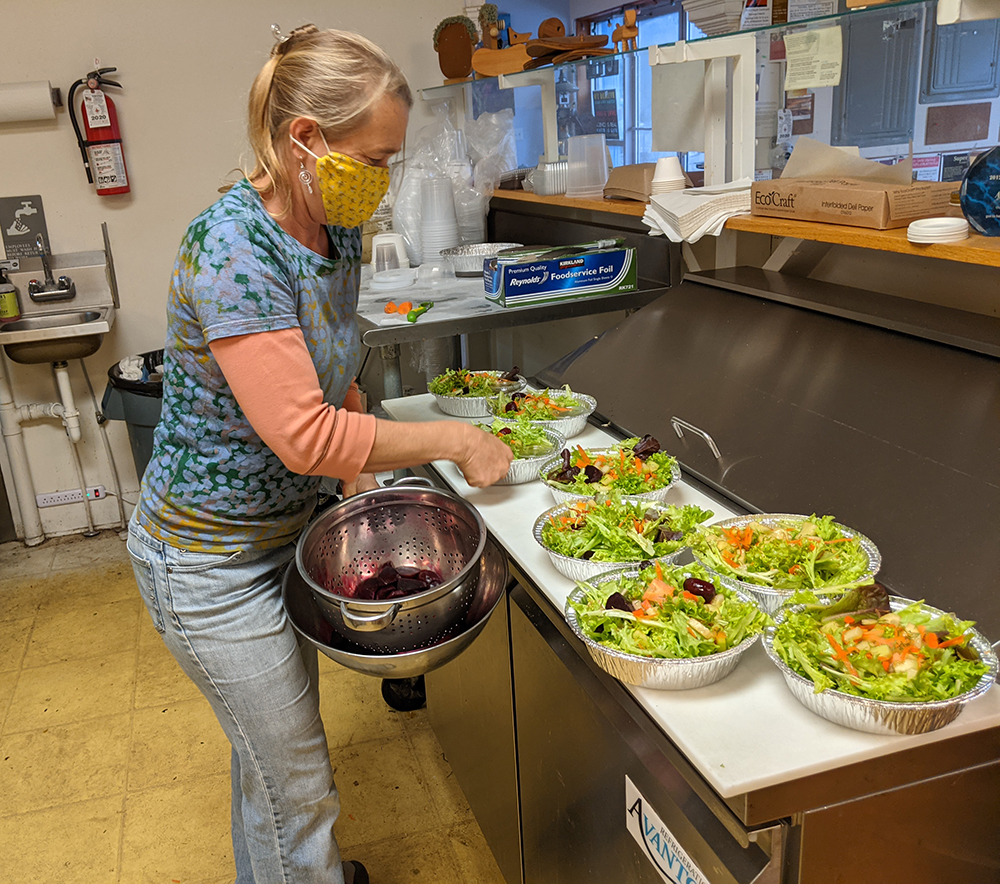 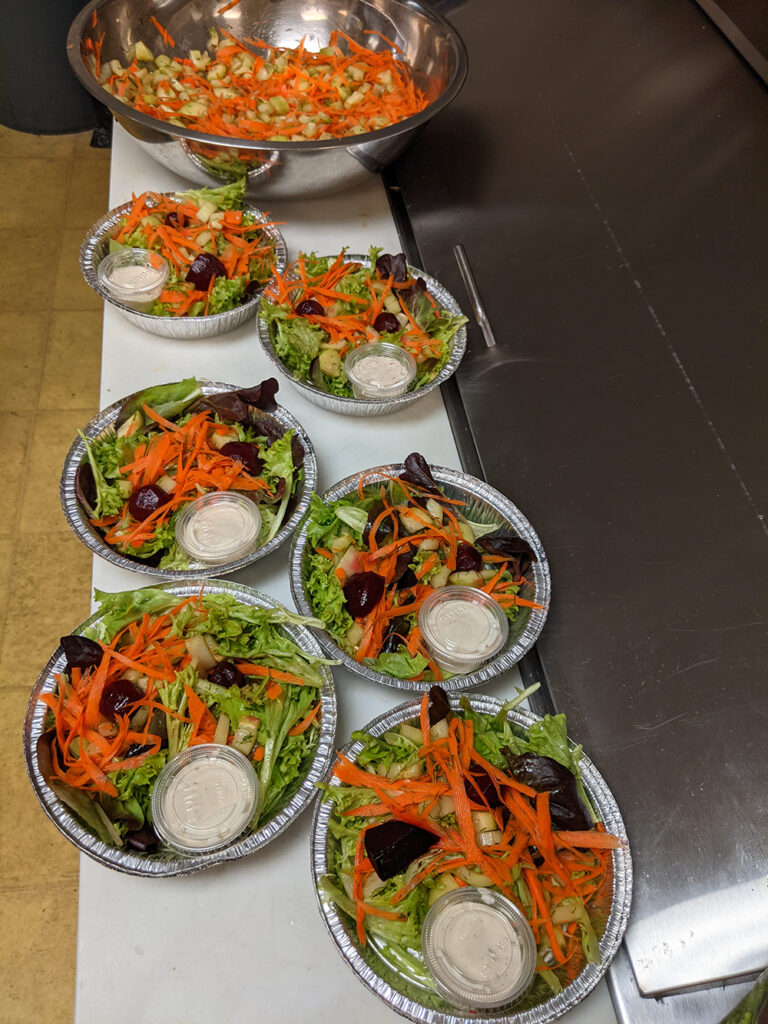 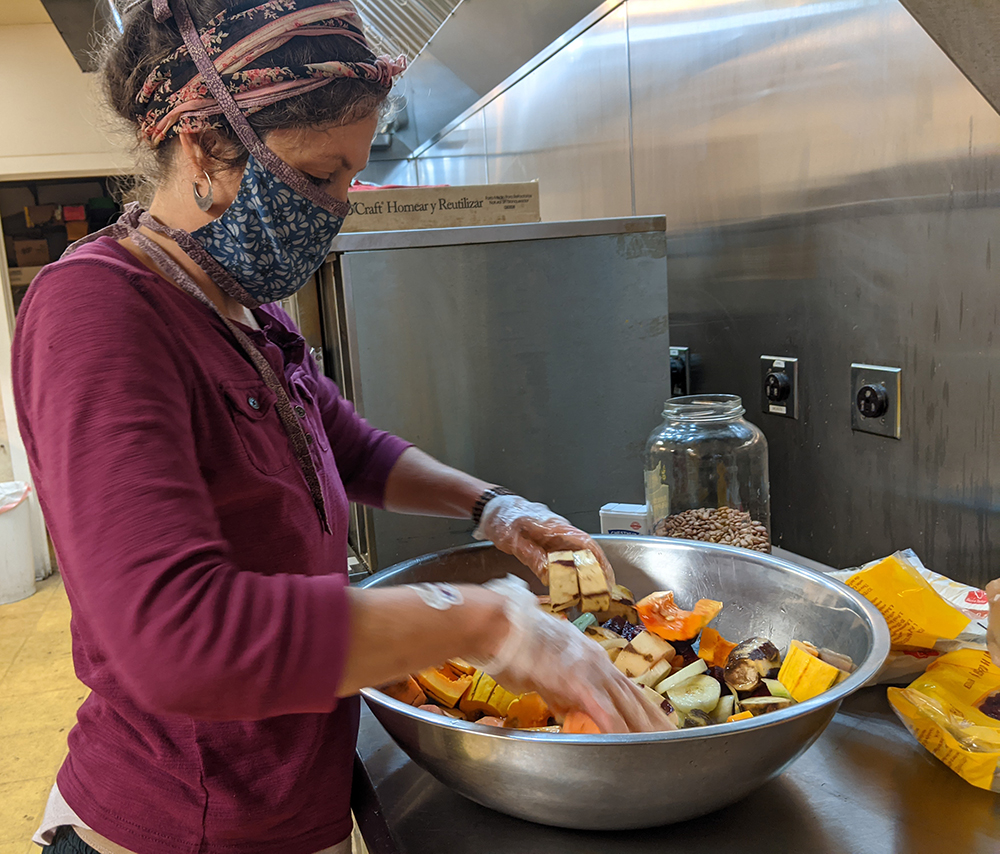 Danielle McComas tosses the veggies she just cut up with oil. Photo by Debbie Roos. 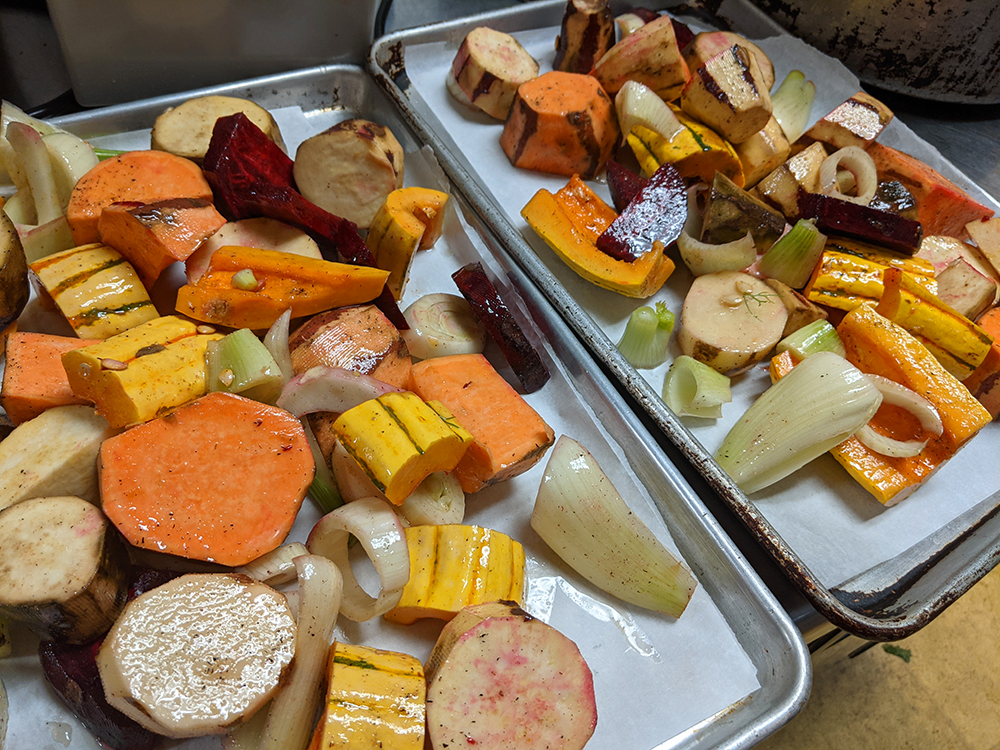 Veggies ready to be roasted in the oven. Photo by Debbie Roos. 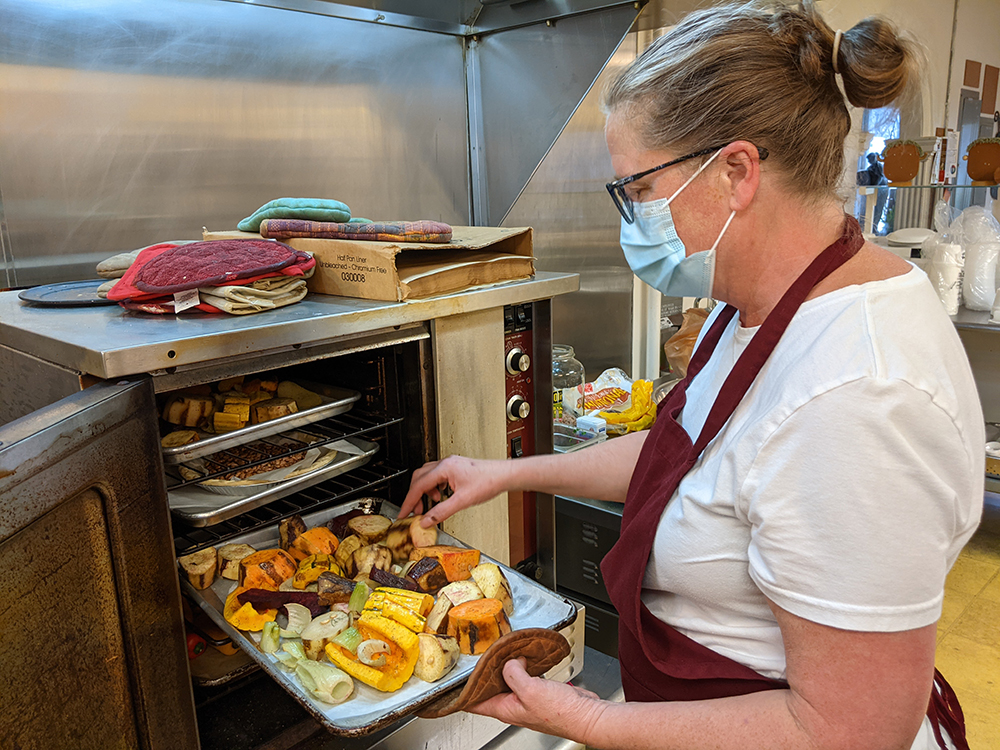 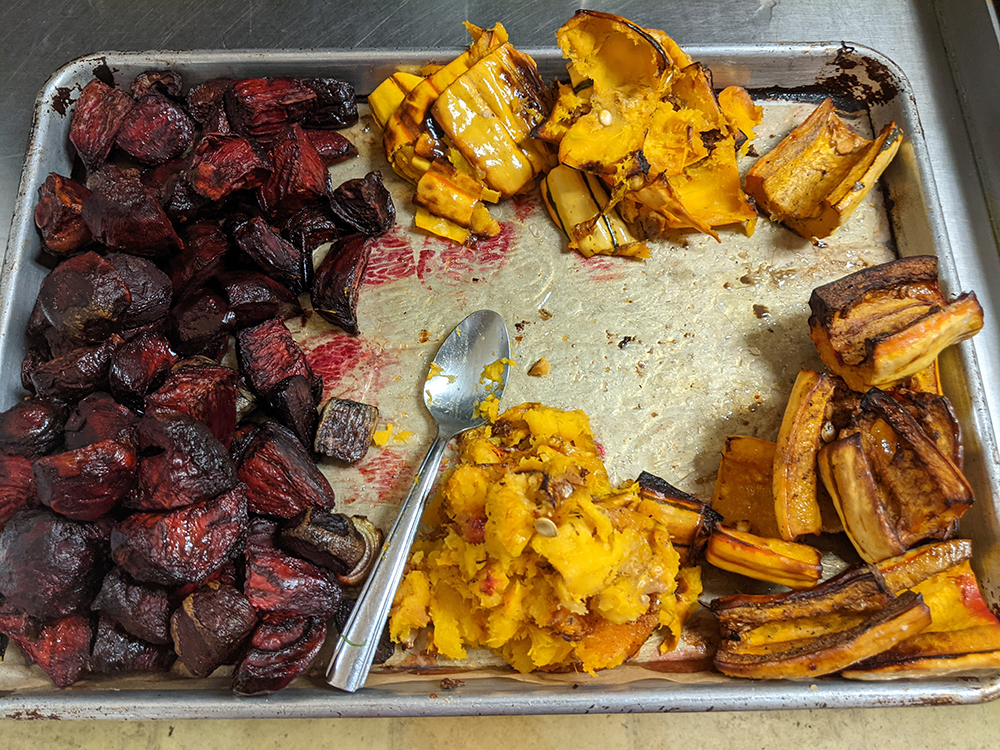 Once the veggies are roasted they are cut up to be made into soup. Photo by Debbie Roos. 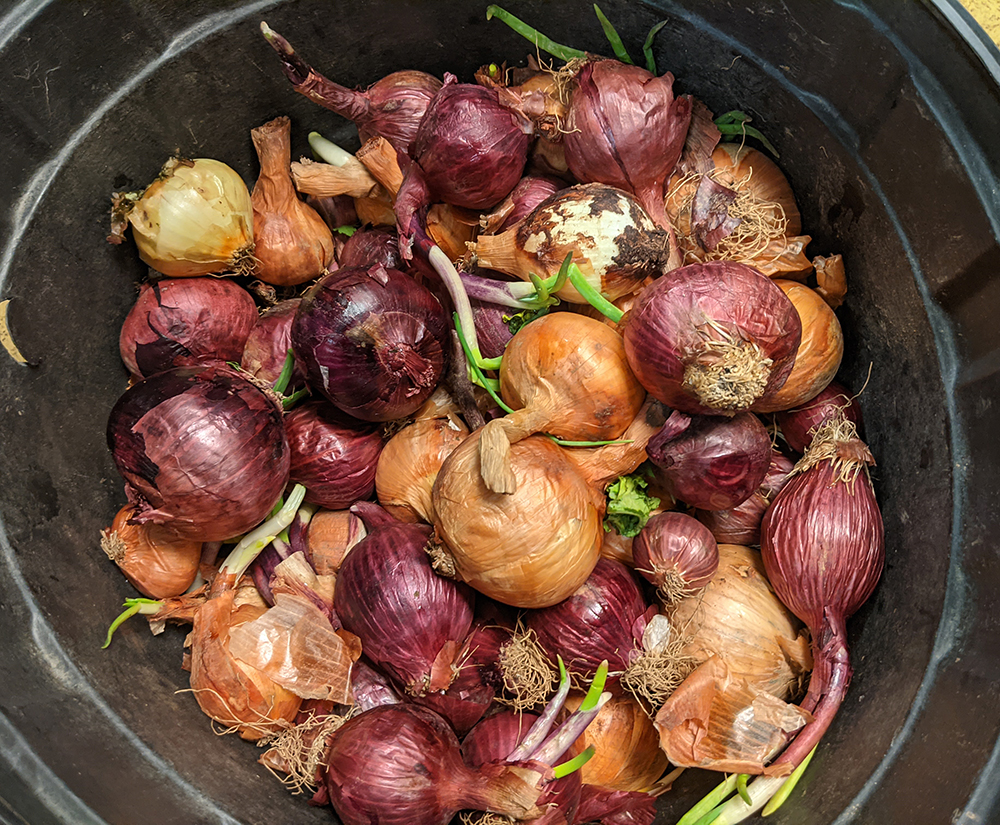 These sprouting onions were donated by a local farm. They can’t be sold as is but they can be cut up and made into great dishes! Photo by Debbie Roos. 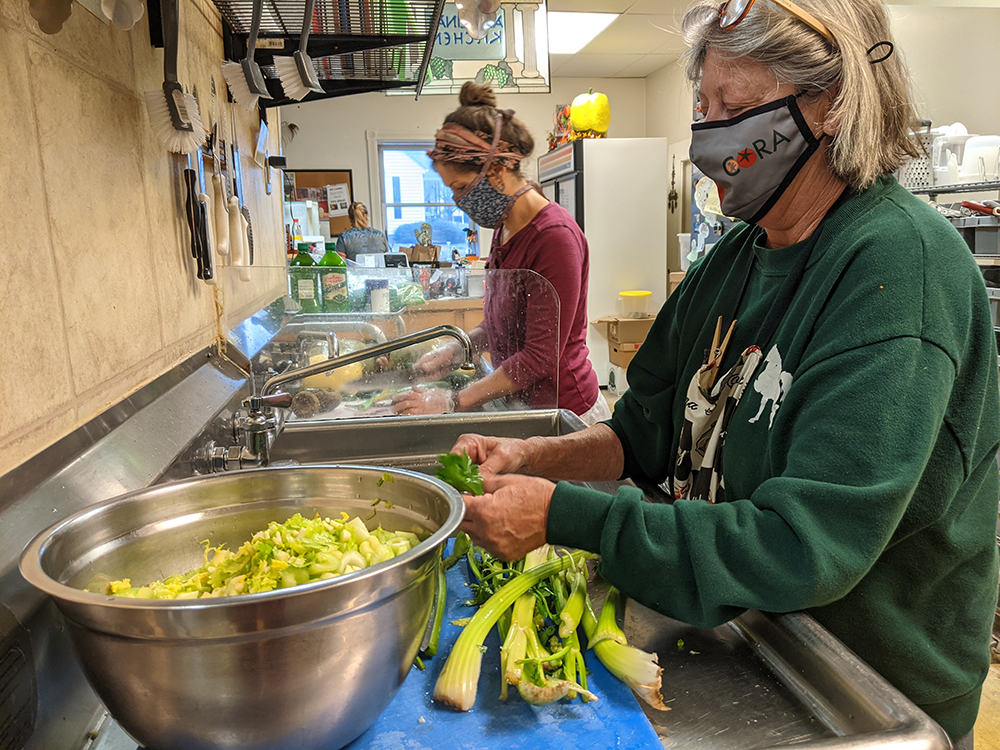 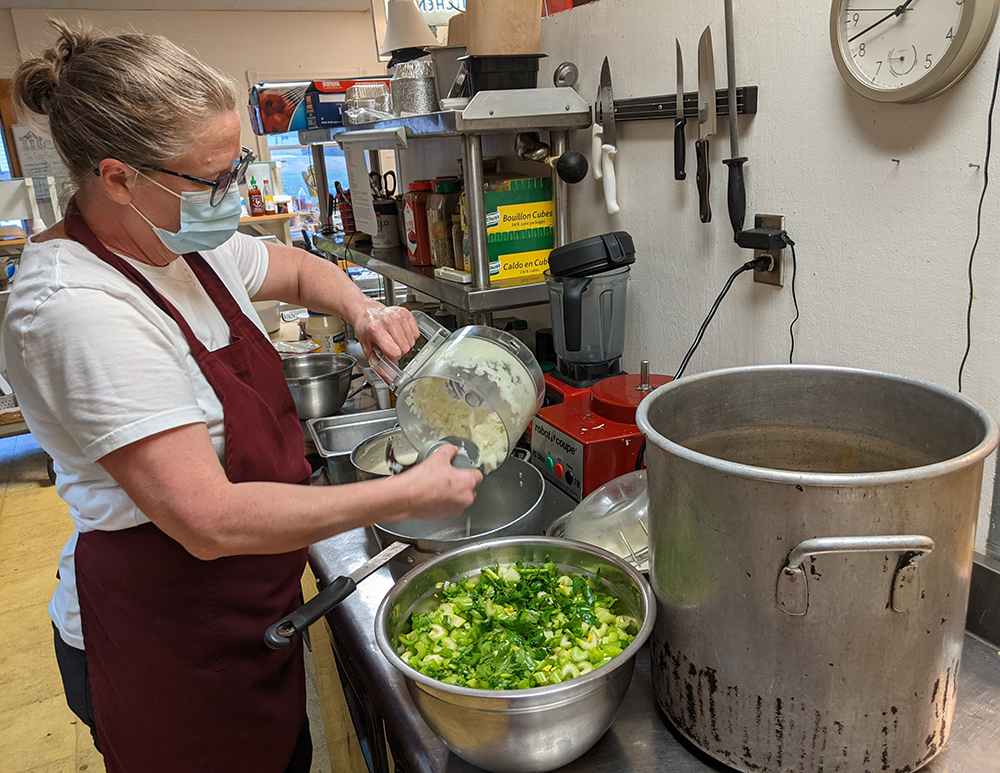 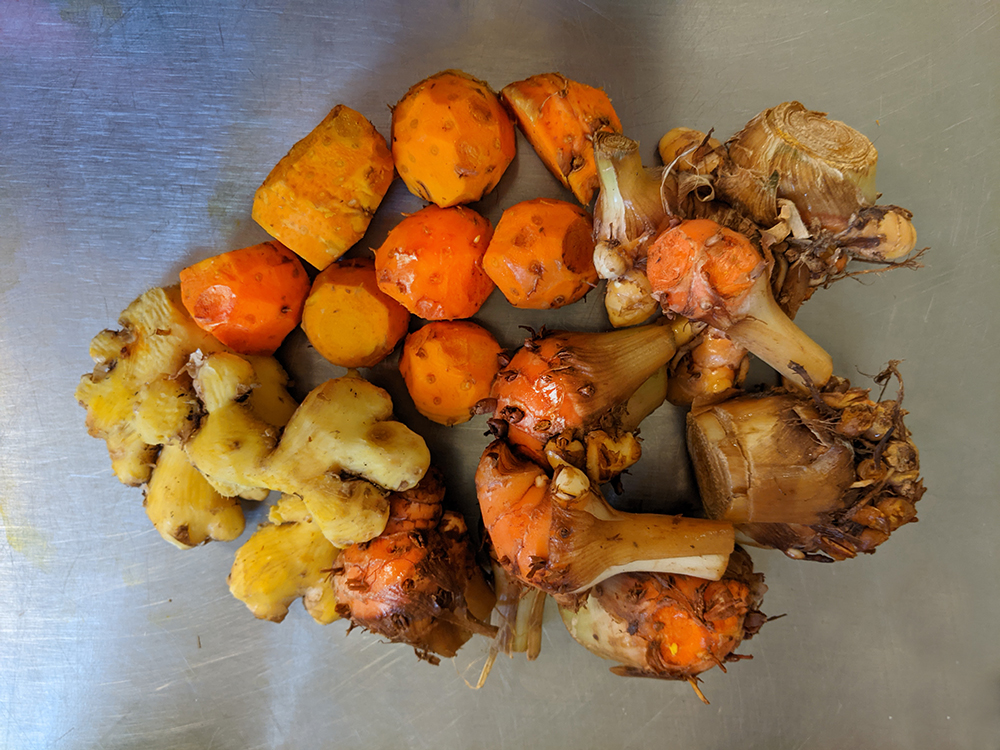 A local farm donated ginger and turmeric which I enjoyed peeling for the soups. A day later and my hands are still orange! Photo by Debbie Roos. 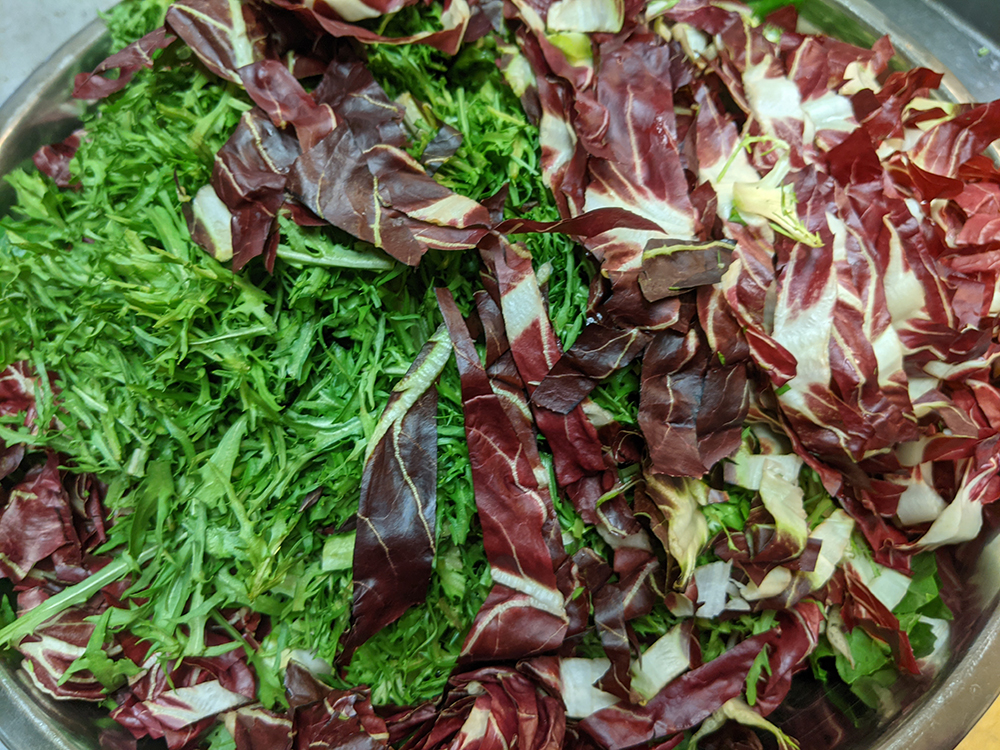 These radicchio and mustard greens were braised and put into one of the delicious soups. Photo by Debbie Roos. 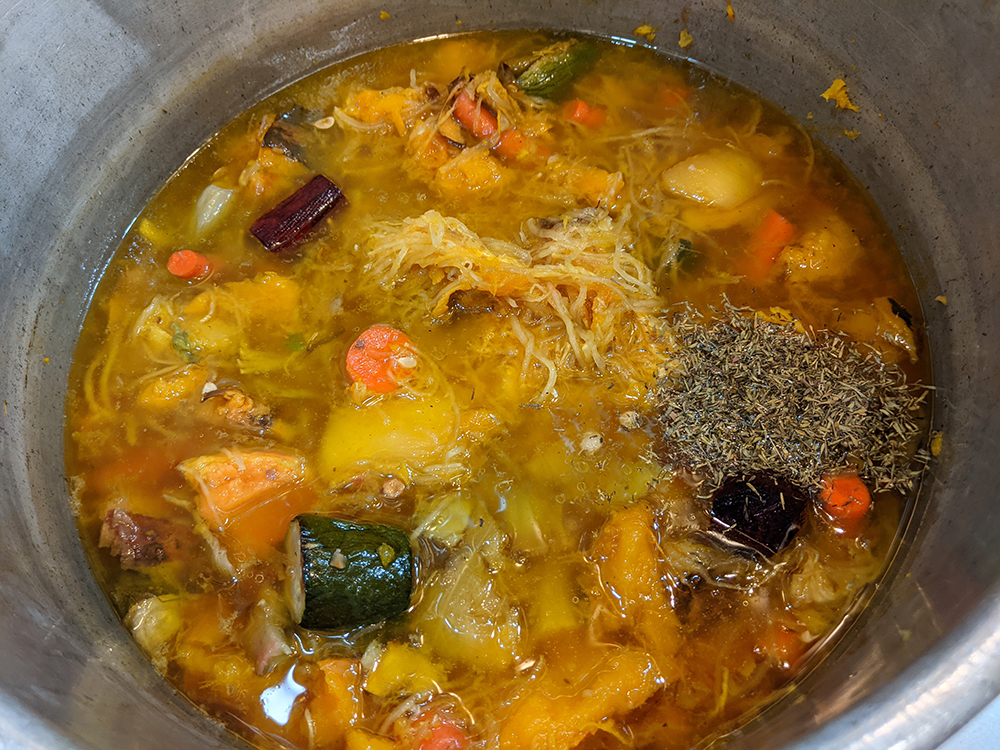 This is the beginnings of an amazing roasted root veggie soup. The team made 50 quarts of soup for CORA families! Photo by Debbie Roos. 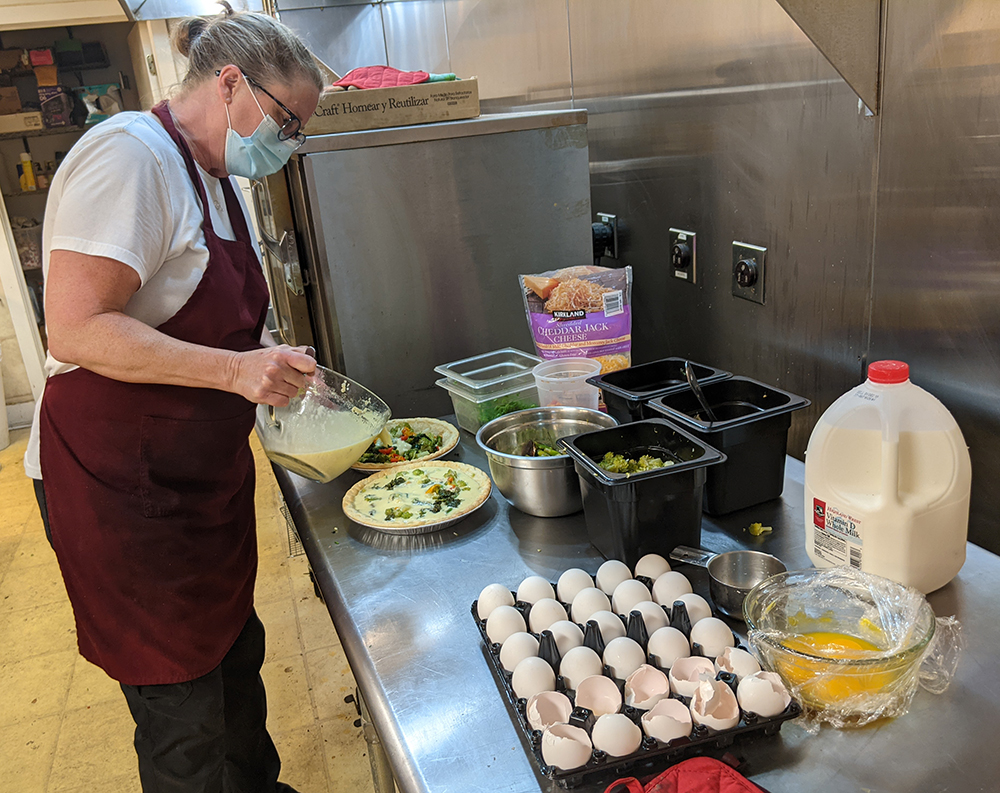 Sarah works on the veggie quiches. Some of the eggs were donated by Chatham County gardener Pam Costenbader. Sarah made both meat and vegetarian quiches. Photo by Debbie Roos. 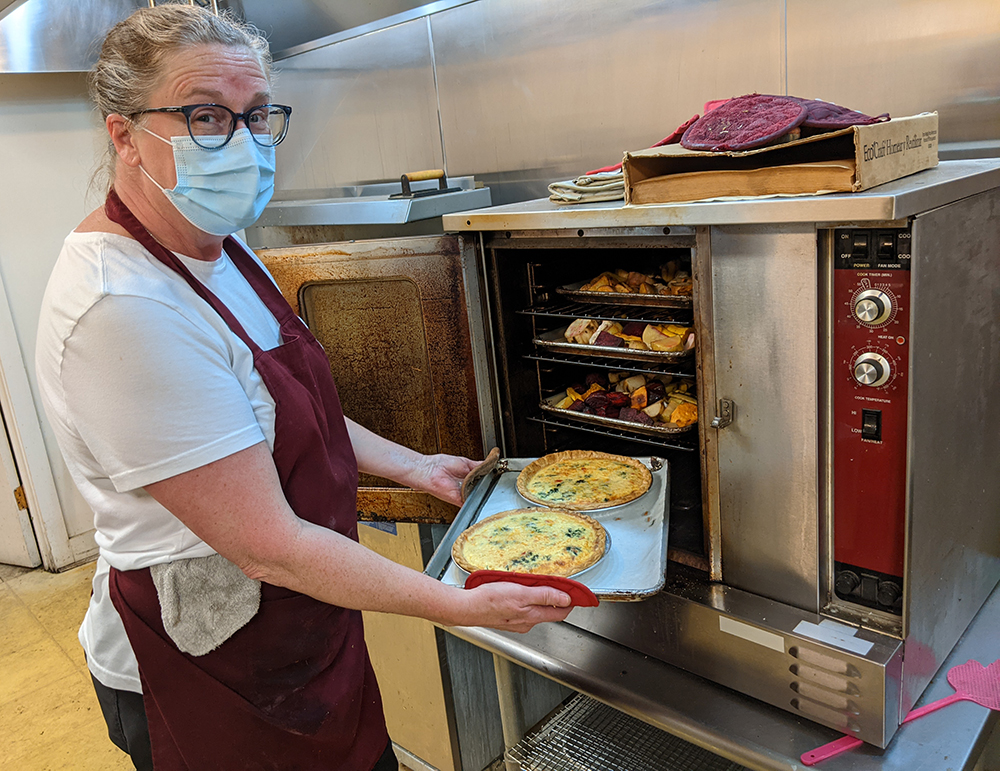 Sarah checks on the quiches. Photo by Debbie Roos. 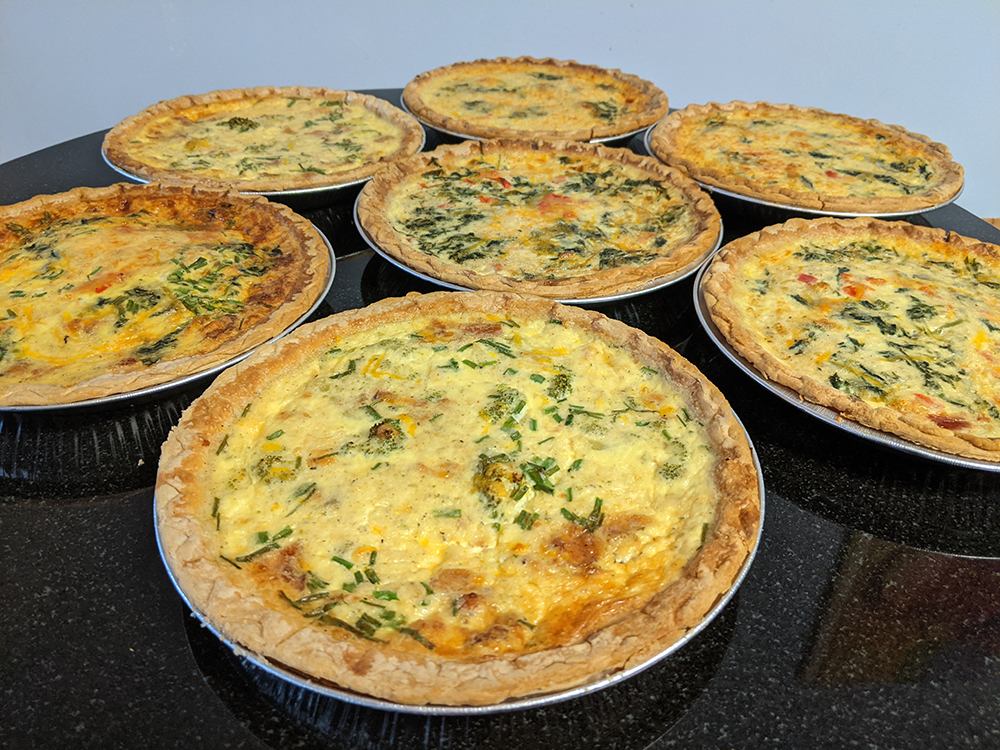 Who wouldn’t be happy to take one of these beauties home? Sarah made a total of 20 quiches. Photo by Debbie Roos. 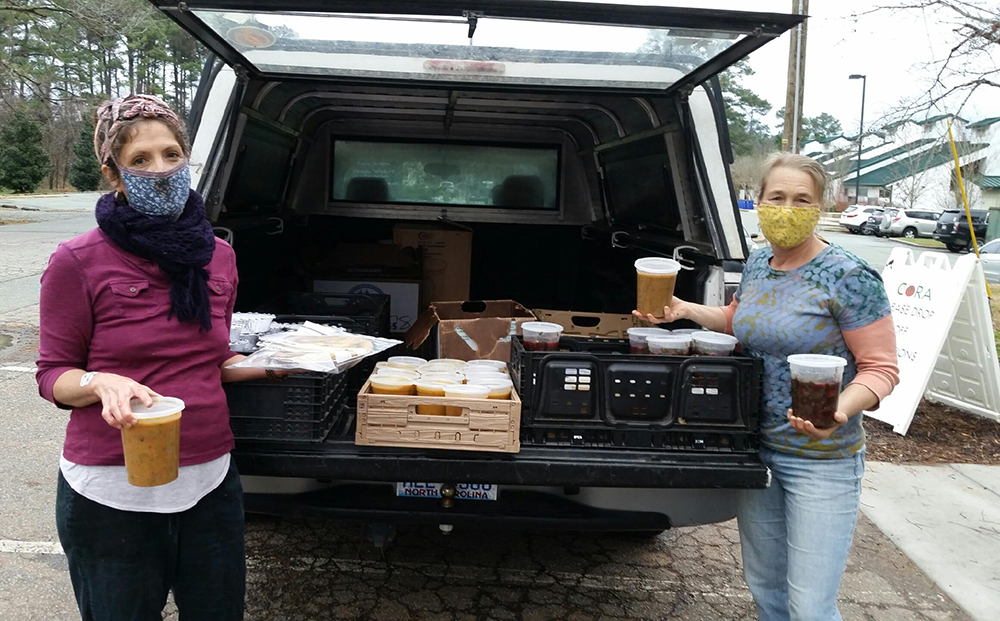 Danielle and Moya deliver all the prepared food to the CORA Food Pantry at the end of the day. Photo provided by Moya Hallstein.