Find this article at:
go.ncsu.edu/readext?649258
— Written By Debbie Roos 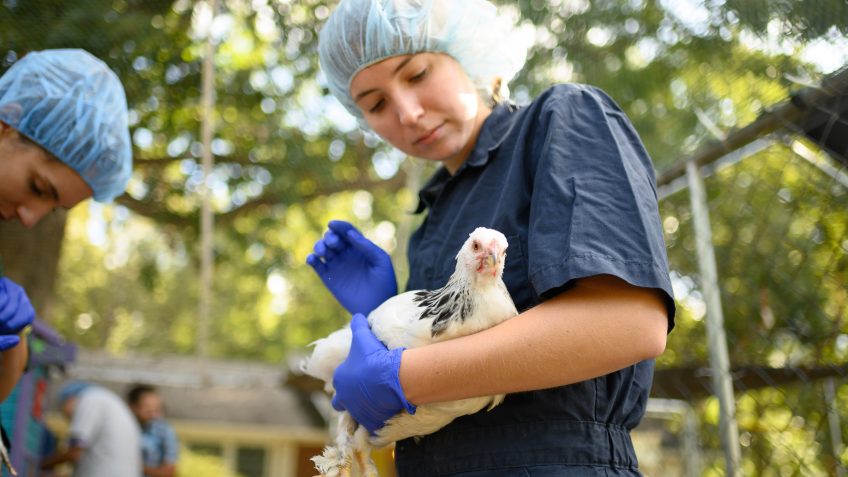 This is no ordinary home for chickens, but to their owners these are no ordinary chickens.

The enclosure in the front yard of Kevin Owen’s home in Hillsborough is roomy for his dozen chickens, designed to keep out predators and impressively clean, with hay on the ground to soak up excess moisture.

There are colorful elevated coops on one side and another side with a water station and a boredom-breaking small chicken swing, a larger version of a birdcage perch.

Though they produce eggs, the chickens are more pets than poultry. Owen introduces them like family — there are silver-laced Wyandottes, buff Orpingtons, black Australorps. There’s a Polish with an Albert Einstein-esque white mane and a sweet disposition. That one lets anyone pick him up, Owen says.

Owen points out a black silkie and describes him as a fluffy little dude with a distinctive swagger. “He’s adorable,” says Owen, “and he’s a little bossy.”

Immediately behind the enclosure are lawn chairs where you can frequently find Owen and his family.

“We come out here every day for an hour or so and just watch the birds,” said Owen. “We just talk to them.”

Owen and his family have kept chickens on their property for three years and take the job seriously. But there’s always more than can be done and more lessons to learn. 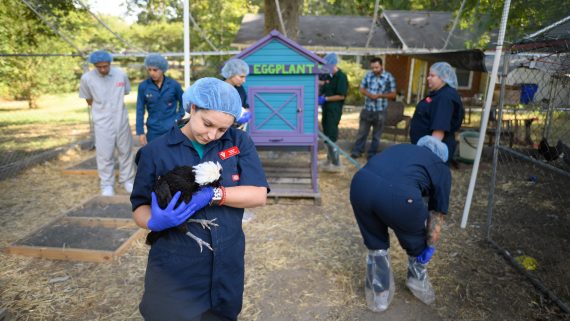 During site visits, fourth-year DVM students take close looks at chickens, but also the chickens’ surroundings in and outside of their enclosure. Photo by John Joyner/NC State Veterinary Medicine.

The hospital service offers follow-up house call to Triangle-area non-commercial chicken owners — designated as those keeping flocks of under 1,000 — typically after they have brought an animal to be seen at the NC State Veterinary Hospital’s exotic service. The service can address a laundry list of important issues for private poultry owners, from health rechecks and enclosure practices to disease prevention.

Only a very small handful of veterinary schools across the country offer such a service.

It is helping a growing and underserved population of poultry owners. Commercial poultry is North Carolina’s No. 1 agricultural industry, and poultry management veterinarians are always needed in the state. But so-called backyard or urban chickens continue to grow in popularity.

The American Pet Producers Association estimated that 10 million United States households kept chickens in 2018. The rise in popularity can also mean a rise in Salmonella outbreaks. A large source of such bacterial outbreaks, according to the Centers for Disease Control and Prevention: urban chicken flocks.

The CVM’s mobile poultry service can act as an important first line of defense.

“You are there to help the animal for someone who cares deeply for them and for their health,” said Crespo, who has worked with poultry for more than 20 years. “You aren’t there to judge or lecture. You give advice. We’re partners. We’re a team together.”

On a recent brisk morning, Crespo arrived at Owen’s home in a large white van with a group of fourth-year CVM students and poultry health management resident Fernando Ruiz Jimenez in tow. Kayla Davis-Owen, Kevin Owen’s wife, heard about the mobile service and reached out to the veterinary hospital, wanting to learn more about their chickens and what they could be doing better as owners. They had also noticed a respiratory issue with one of their birds. 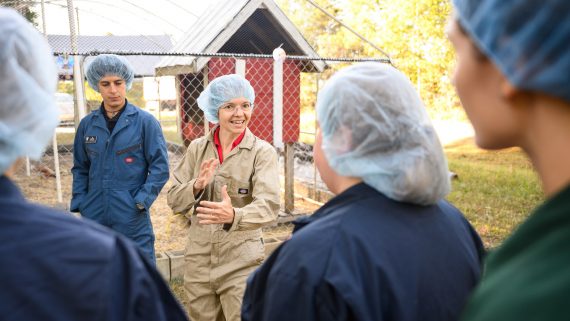 The work begins immediately after the van is parked, as Crespo and her students look around and inside the enclosure as they walk over to greet Kevin Owen. They ask background questions: the age of the flock, health histories, if there are specific concerns the owner has. Crespo quietly walks around and, like a detective, glances up and down and all over, looking for telltale clues.

But she’s the kind of leader who lets her students take the lead as much as possible.

“All right, you guys walk around, check it out and tell me what you think,” she instructs.

Soon the students are inside the enclosure with Crespo. They ask their professor questions about enclosure design and the feeding system. They pick up a few of the chickens to closely inspect their feathers and get an idea of body weight.

Crespo peppers the session with information for her students — that silkies make wonderful mothers, that the type of water dispenser being used can overflow frequently and dampen the ground around it, possibly creating a breeding ground for bacteria and parasites.

“When you are in a clinic, you cannot check the environment,” says Crespo. “You can’t look at the soil or a wooded area or a feeding area. Often, unless owners change the environment, the problem is going to escalate or come back again.”

The whole session takes about an hour and so but seems to go by much quicker. Soon afterward, Crespo and Jimenez email an easy-to-read five-page report to the owners reviewing the day’s activities and their findings. They praise the flock’s overall good health, note than a hen has a distended abdomen and point out that it’s common in hens older than 2.

There is a lot of advice the Owens can immediately address. There’s a recommendation to raise their feeder and drinker for easier access and it’s shared that treating the drinking water with chlorine or citric acid — there’s even a recipe outlined — can reduce bacteria loads.

It’s one thing to simple tell owners to increase the feeder height during a quick in person examination. It’s quite another to offer clients diagrams and pictures that show chickens standing next to feeders, clearly indicating the heights to shoot for.

“They recommend a whole new water system, which makes perfectly good sense,” said Owen. “But they said that even if we don’t go with the new system, here’s some other things we could be doing instead. It’s really simple, really good ideas that we just hadn’t thought of.

“We would love to get everything worked out and call them again and say, ‘Hey, is there anything else? Anything else we could learn?”