Find this article at:
go.ncsu.edu/readext?543153
— Written By Debbie Roos 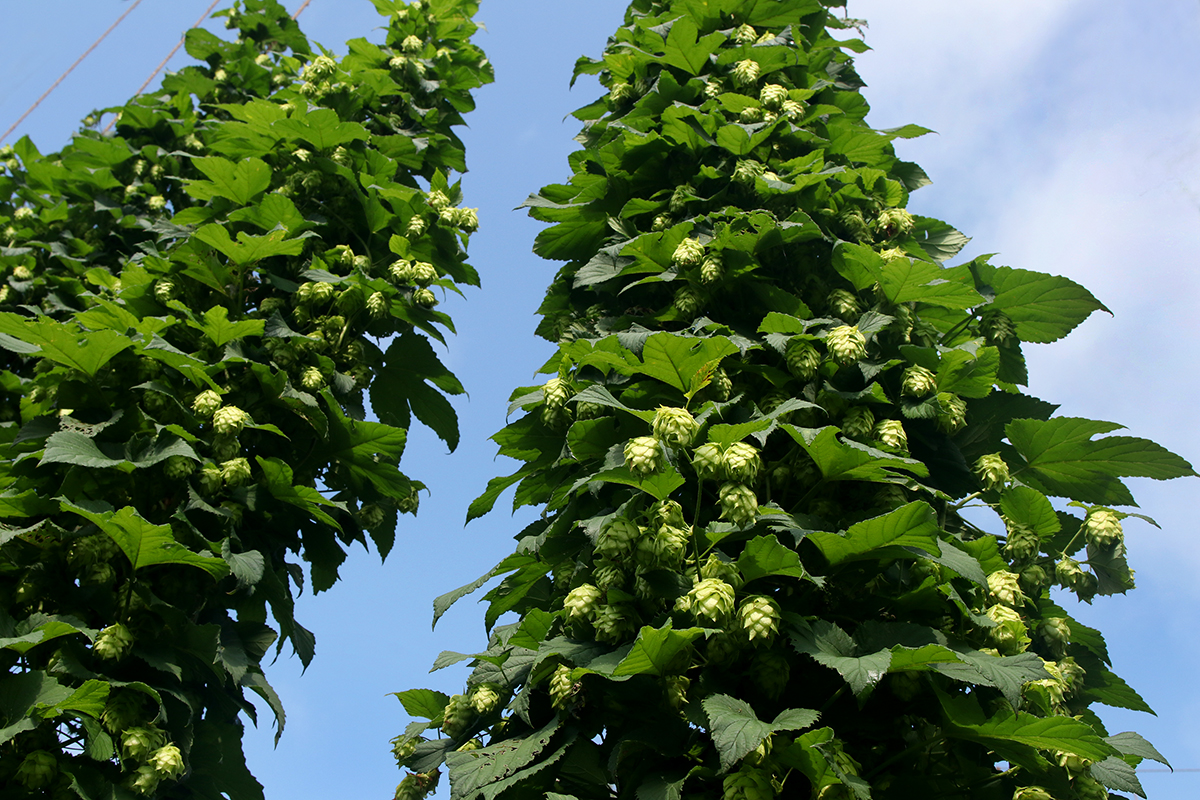 It’s been an exciting couple of weeks out at Bee Hoppy Farms…the annual hop harvest!

Grower Tiffany Cooper is finishing up her second year of hop production at Bee Hoppy Farms outside Pittsboro in Chatham County, NC. Hops are an old crop that is coming around again: it used to be grown in North Carolina about 200 years ago but now most commercial hops acreage is found in the Pacific Northwest. About six years ago North Carolina growers started planting hops again and since then it has really taken off.

Hops are perennial so they come back each year. The bines (unlike vines, bines do not have tendrils) grow to about 25 feet long each season and must be pruned and trained to a trellis. The female flowers, called cones, are harvested and used to flavor beer.

Tiffany planted three varieties of hops on half an acre in the spring of 2017. She has been very pleased with the yield in her second year. Tiffany sells some fresh (wet) hops to local breweries and home brewers. The majority of the harvested cones are dried and pelletized.

Small-scale hop growers harvest by hand and it’s quite labor-intensive. Some elect to harvest over a period of time and so pick cones right off the bines and do multiple pickings. Others do a once-over harvest, cutting the bines down and then picking the cones. Tiffany does a once-over harvest but it takes a couple of weeks to get it all done.

Tiffany has connected with several breweries in the area excited to be able to source locally grown hops. Last week brewers from two different breweries came out to the farm and actually helped with the harvest! They were very interested in seeing the production. Tiffany also scheduled a Hop Harvest Event on Saturday August 11 and invited friends and curious residents to come out to help with the harvest. I posted photos of this fun event below!

If you are interested in purchasing hops, email Tiffany. 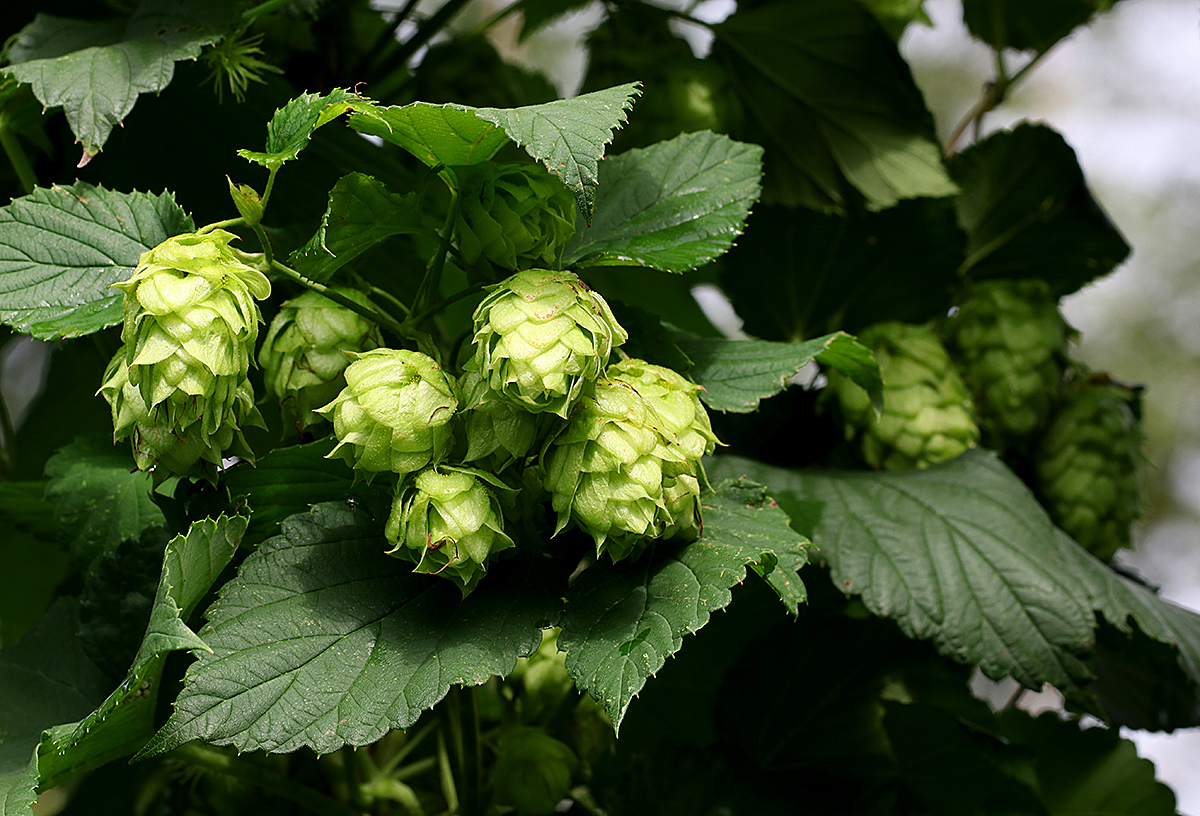 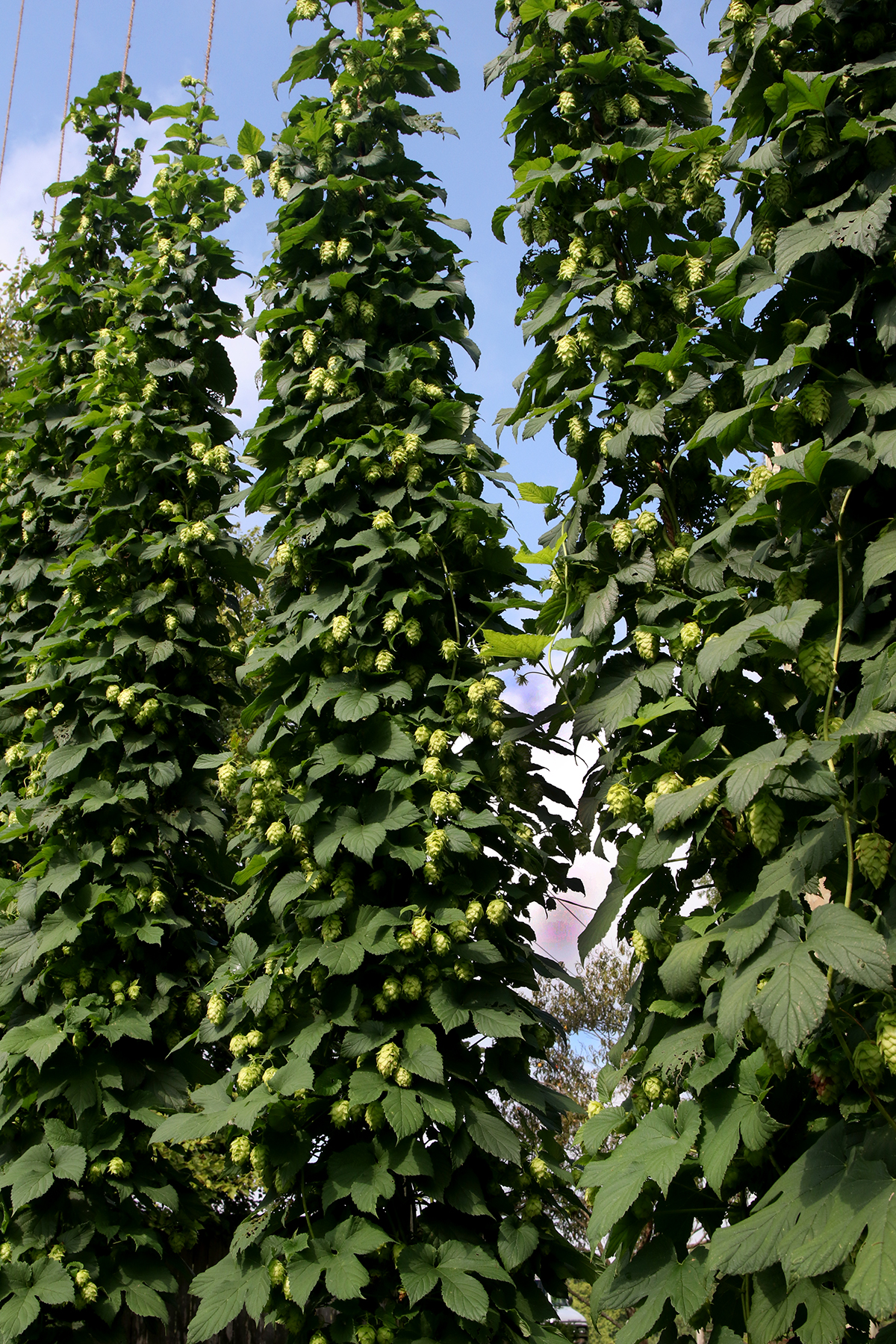 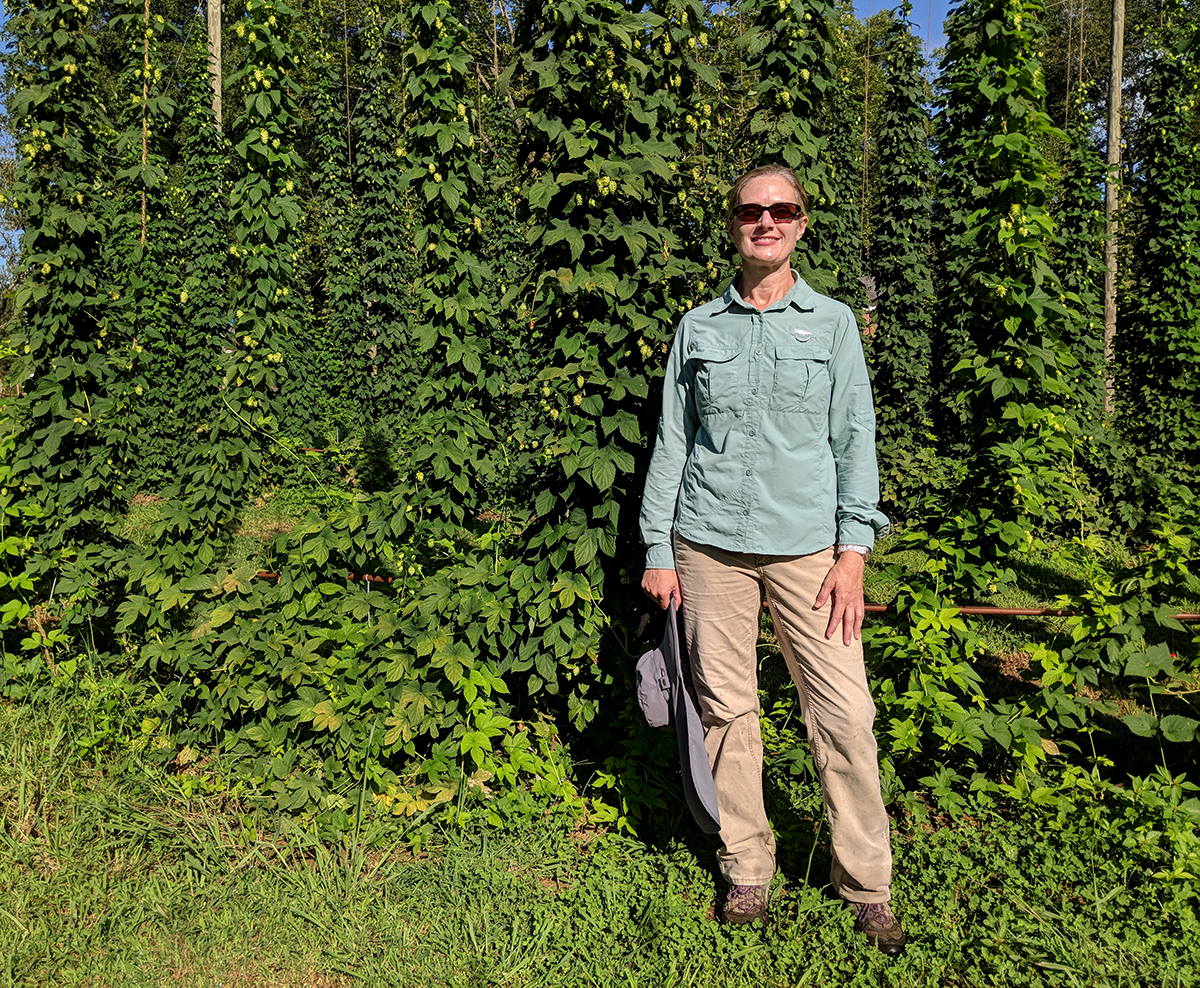 Grower Tiffany Cooper. This is her second year of growing hops. Photo by Debbie Roos. 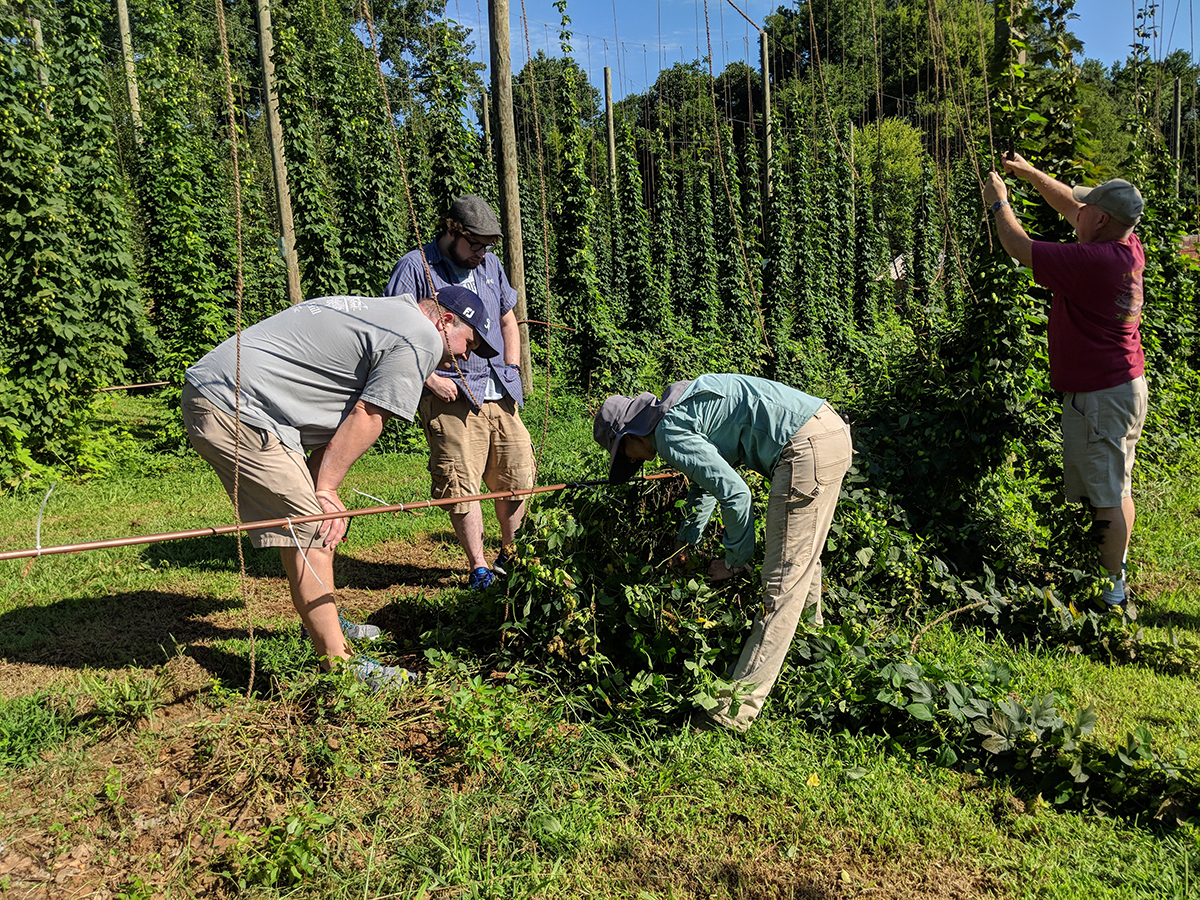 Top of the Hill Brewery & Restaurant in Chapel Hill purchased wet (fresh) hops from Bee Hoppy Farms. Brewers Aaron Caracci (left) and Aaron Delgaty even came out to the farm to help with the harvest! Here they watch Tiffany and her husband Rick cut bines down from the trellis. Photo by Debbie Roos. 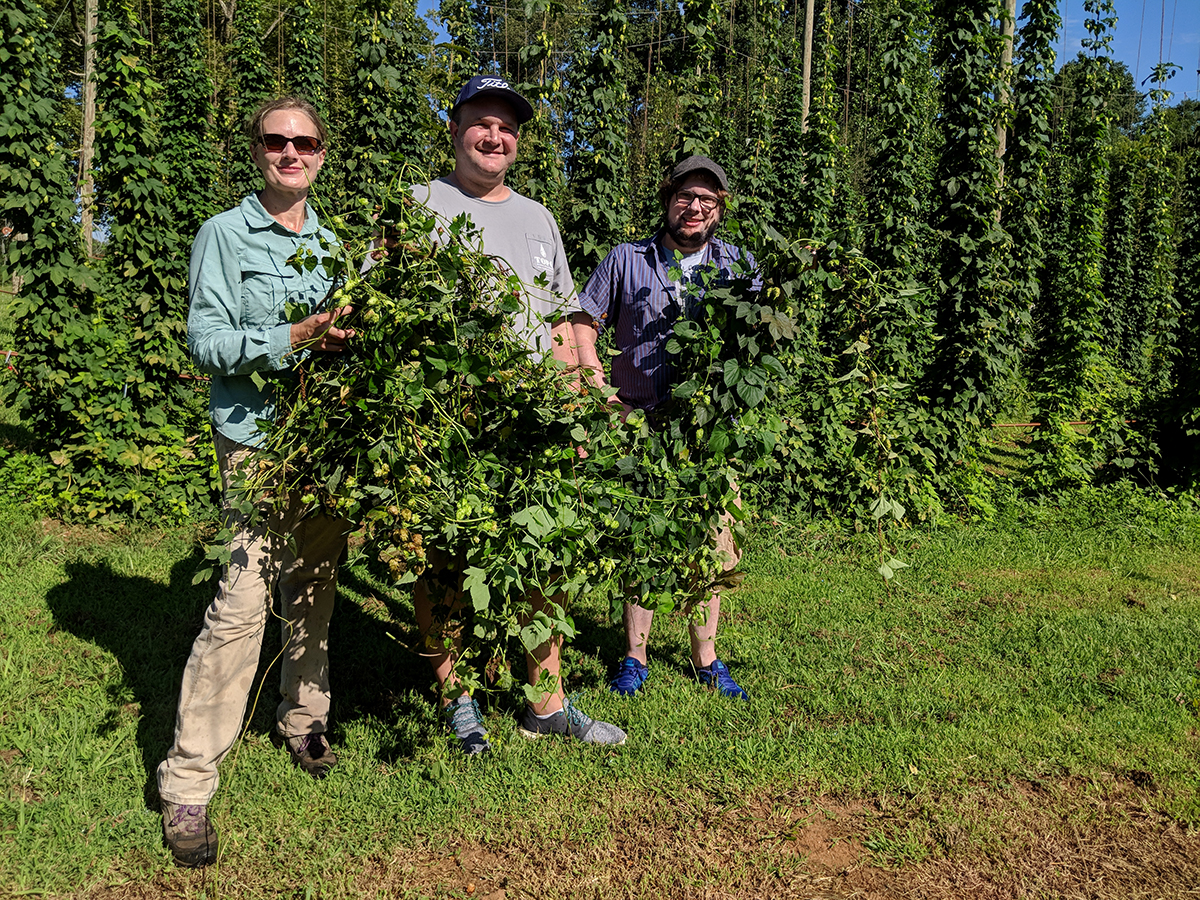 Tiffany with brewers from Top of the Hill in Chapel Hill. Photo by Debbie Roos. 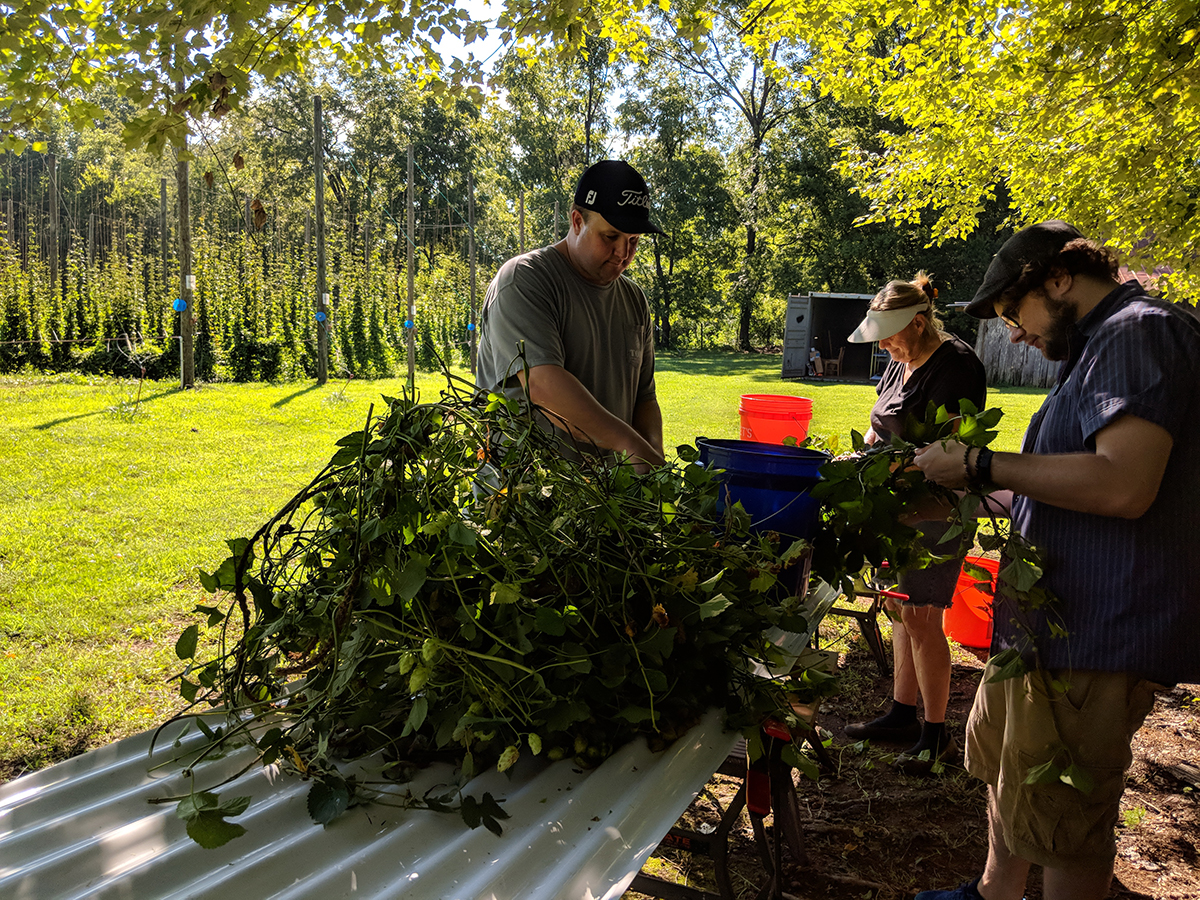 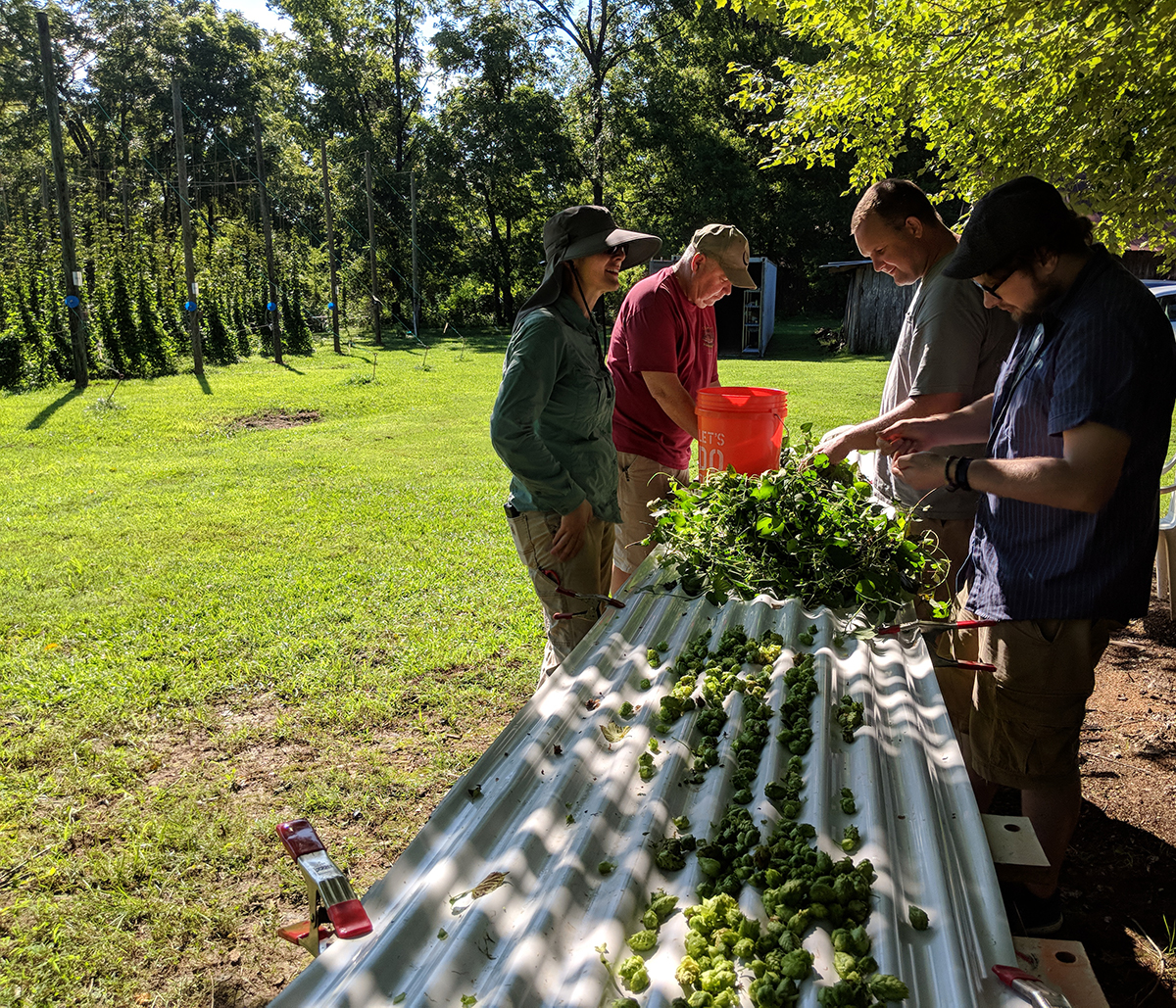 Tiffany has worked hard to reach out and make connections with local brewers. Picking cones allows for a little bonding time and helps the brewers understand what is involved in producing hops. Photo by Debbie Roos. 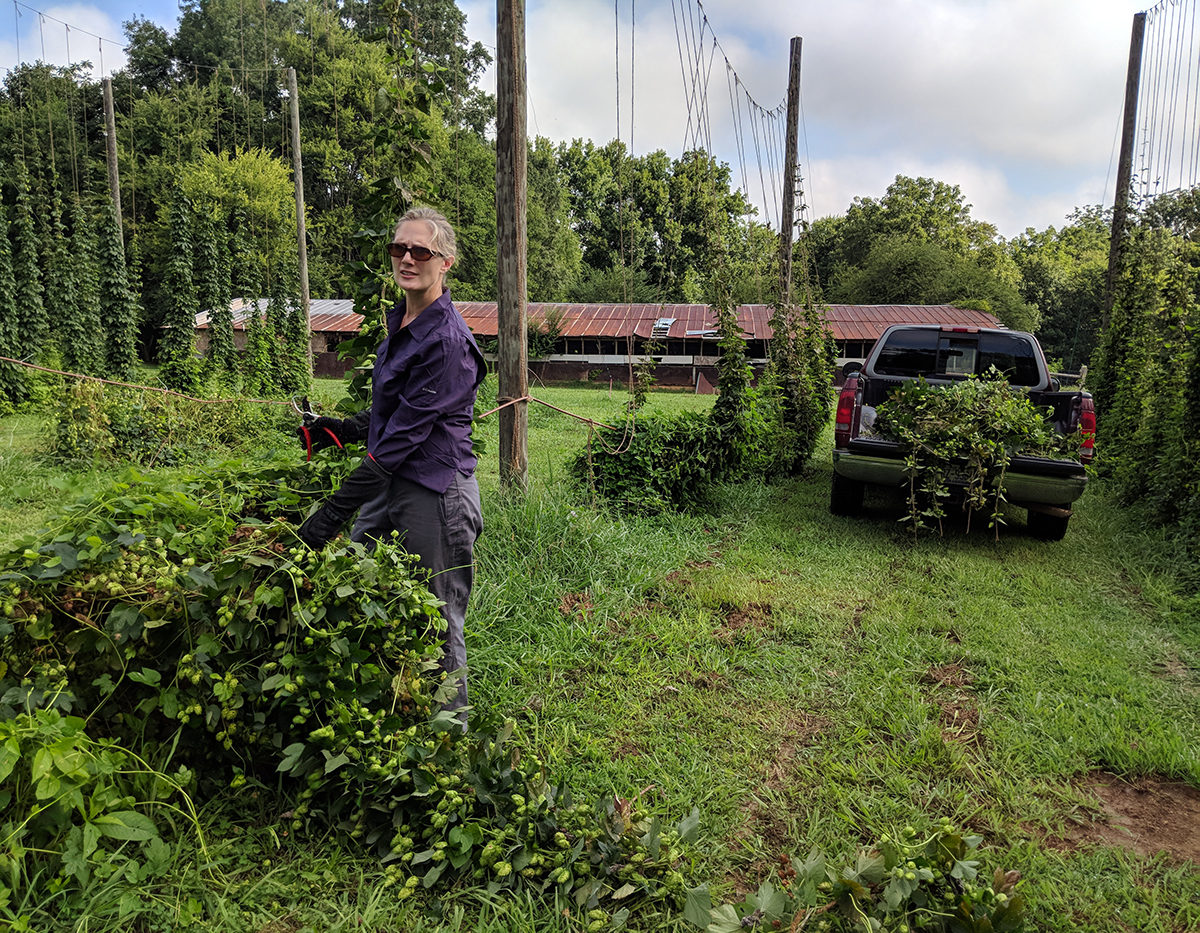 On the day of the Hop Harvest event, Tiffany is back to cutting bines down from the trellis. Photo by Debbie Roos. 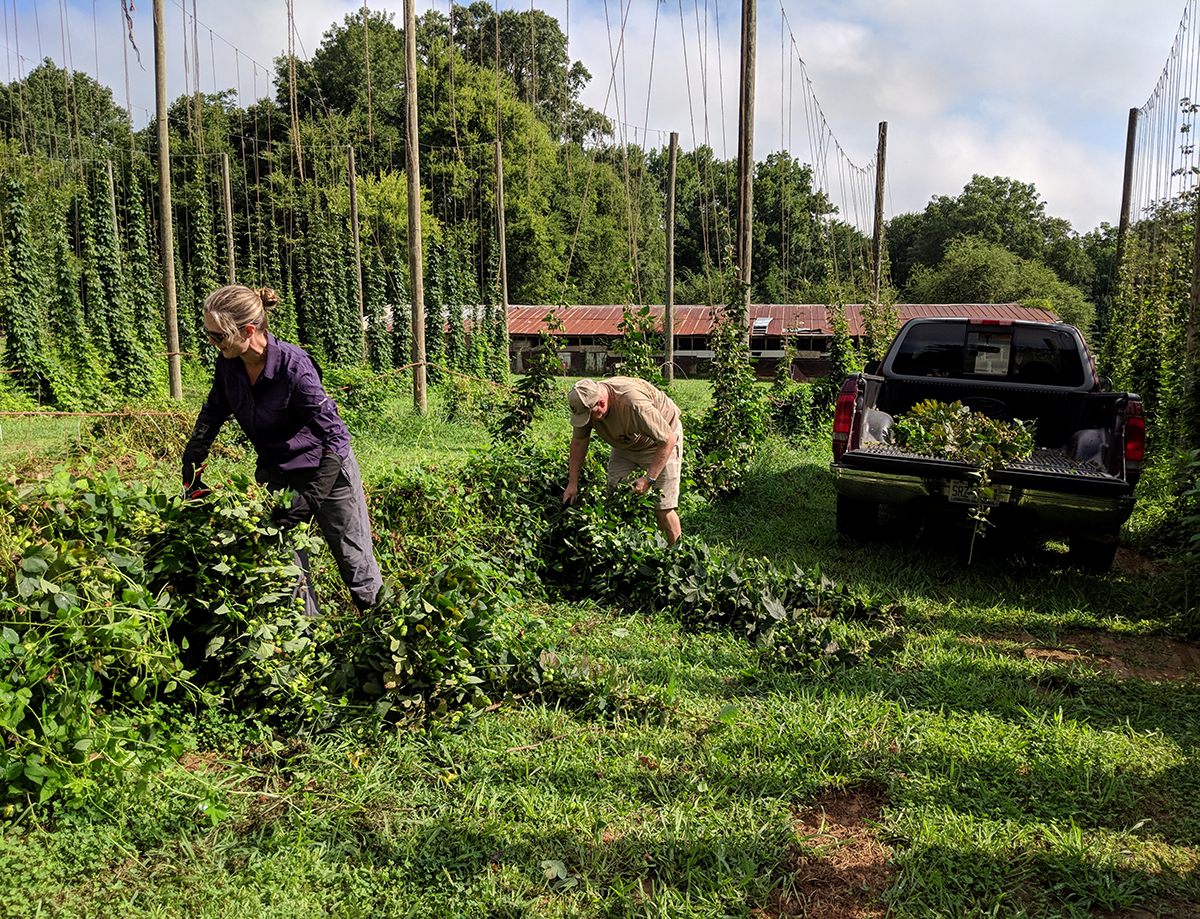 Tiffany and Rick cut bines down from the trellis. They will go back later to harvest cones from the lower part of the bines. Photo by Debbie Roos. 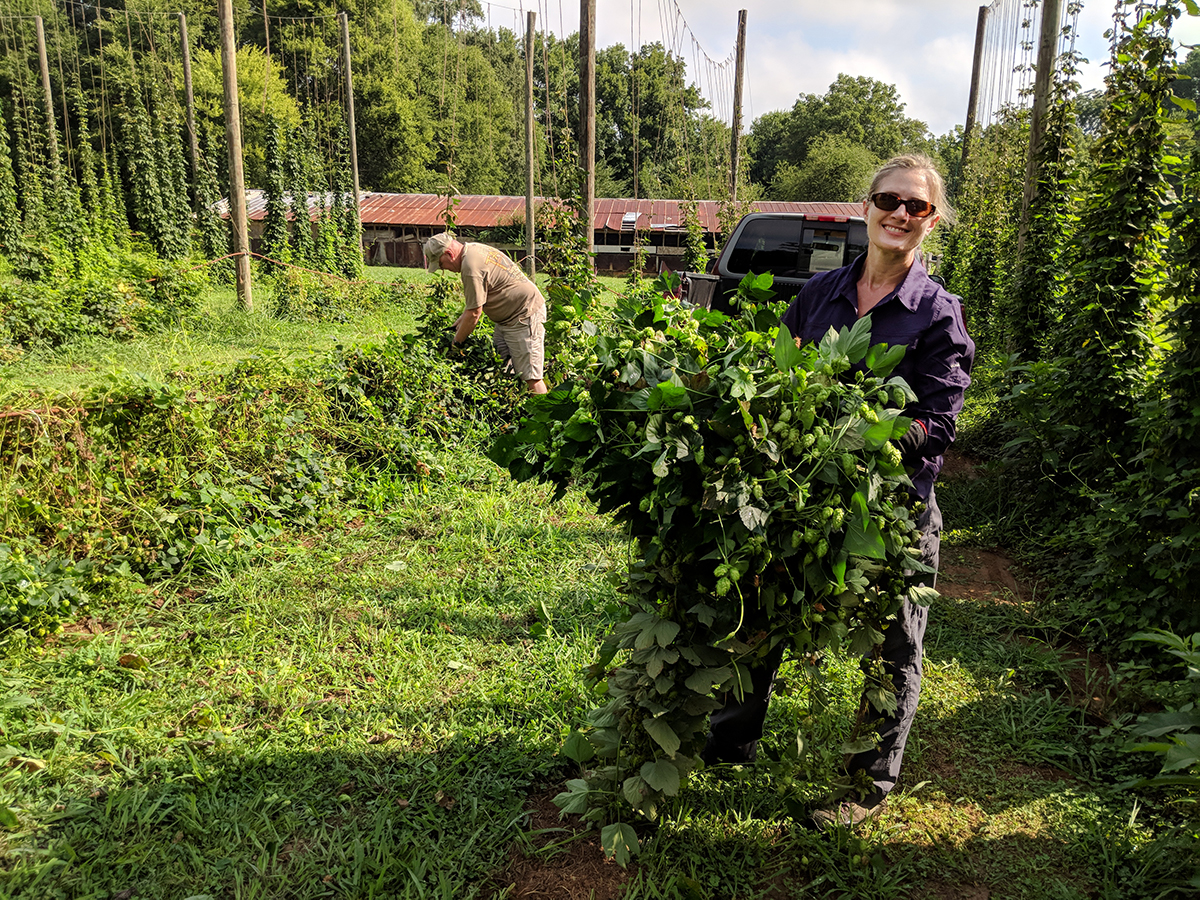 The nice thing about doing a once-over harvest is that you can take the bines into the shade to pick the cones! Photo by Debbie Roos. 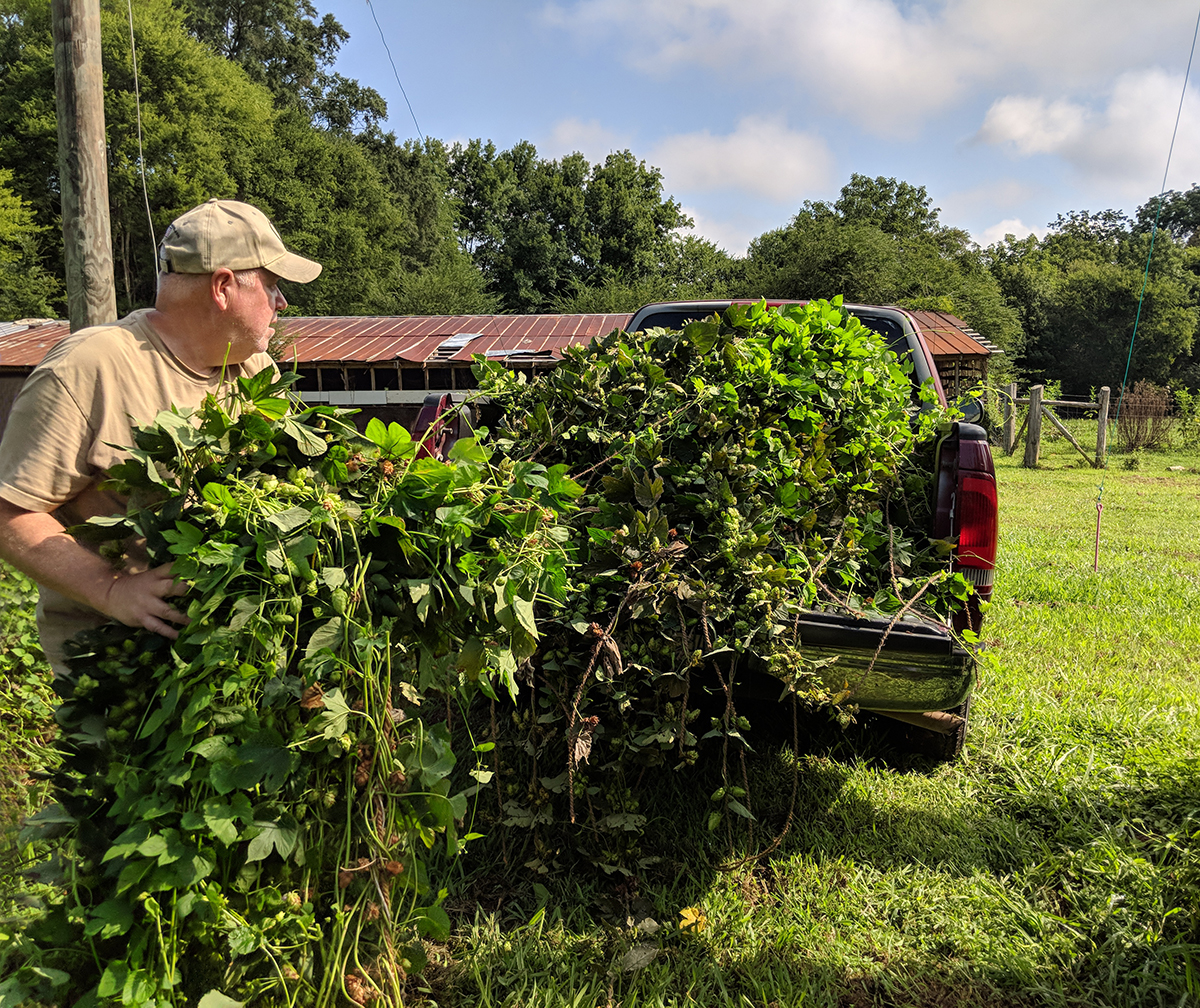 Rick tosses cut bines into the truck to take to the shaded area for harvesting. Photo by Debbie Roos. 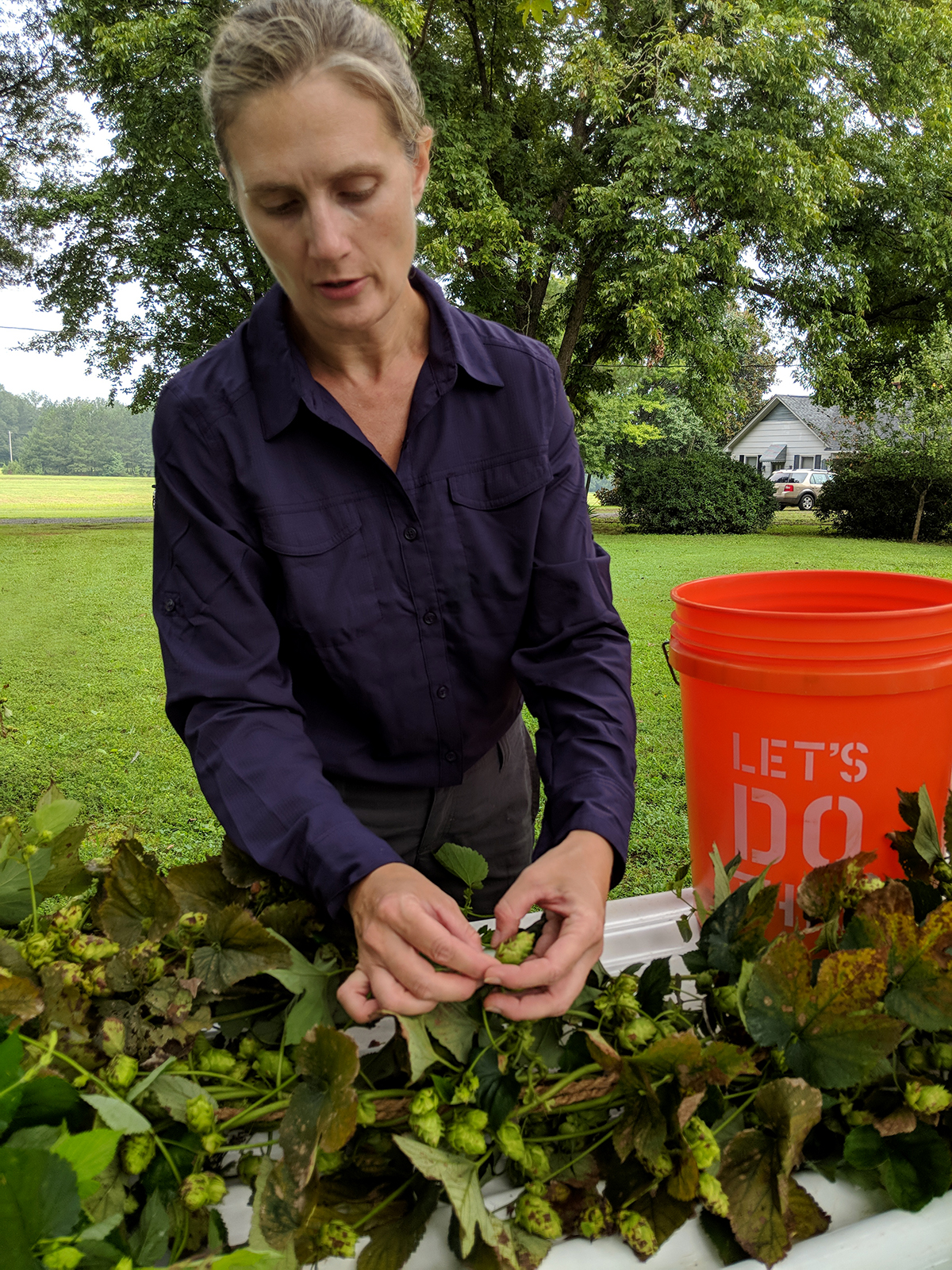 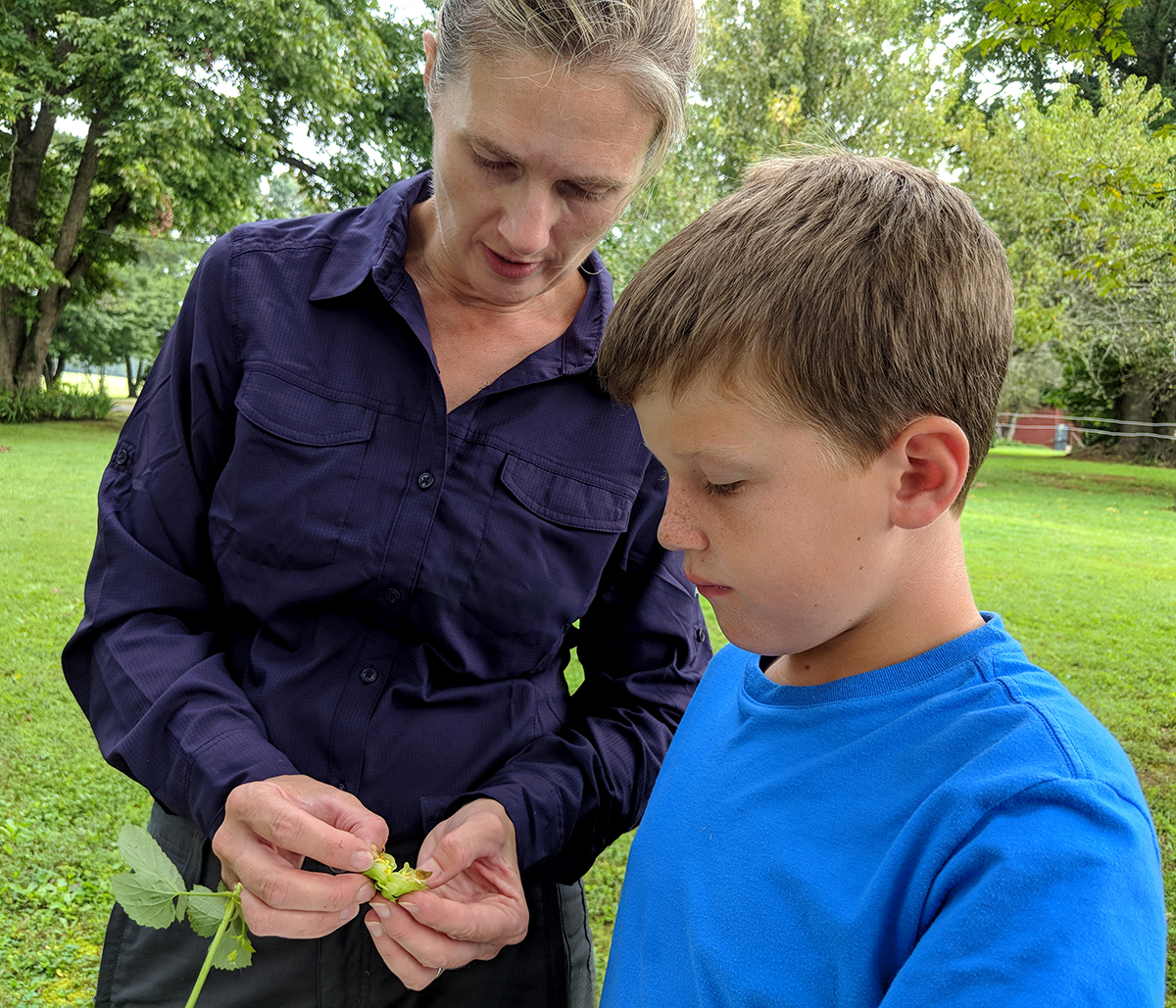 Tiffany’s son Tristan was curious about the cones so she gives him a little lesson about how to tell if they are mature. Photo by Debbie Roos. 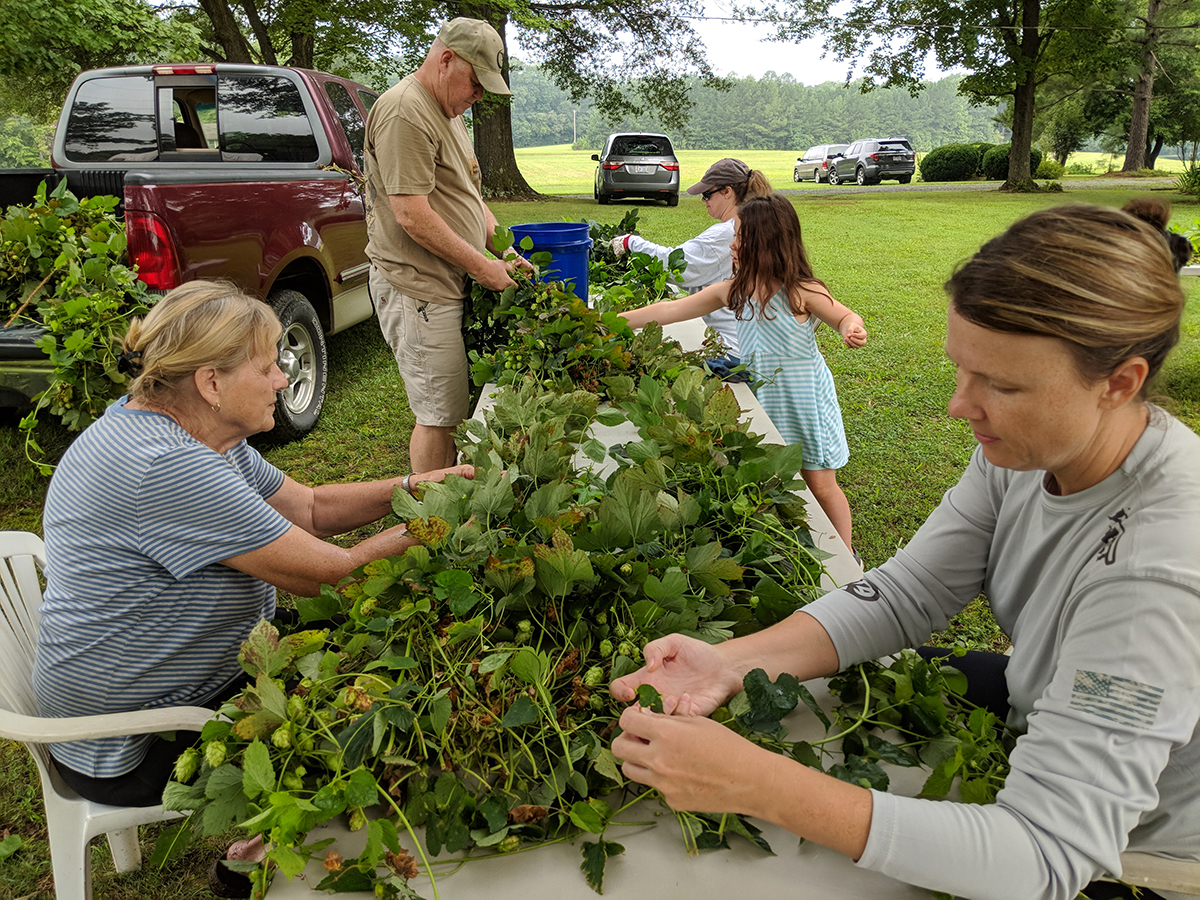 The harvesters were a mixture of friends, family members, farmers, home brewers, and the curious public. Photo by Debbie Roos. 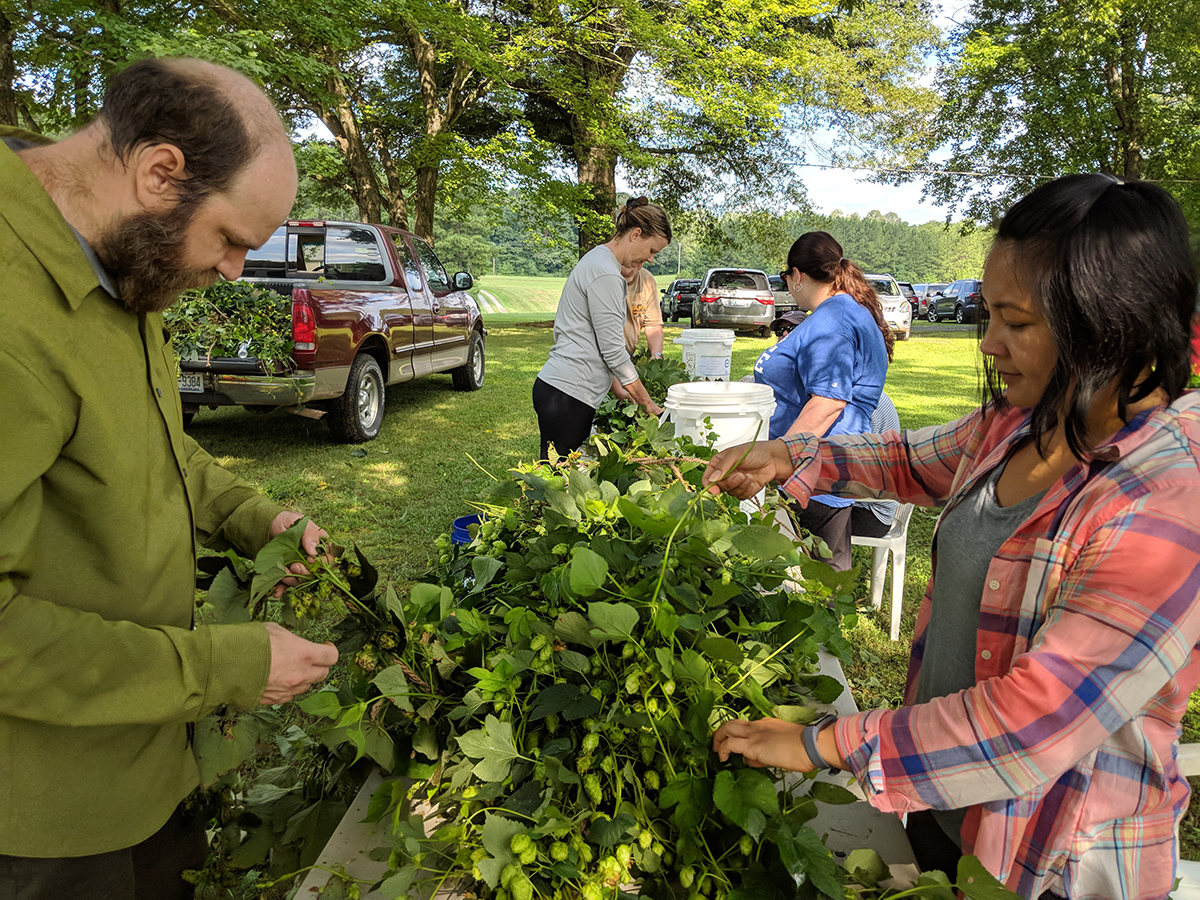 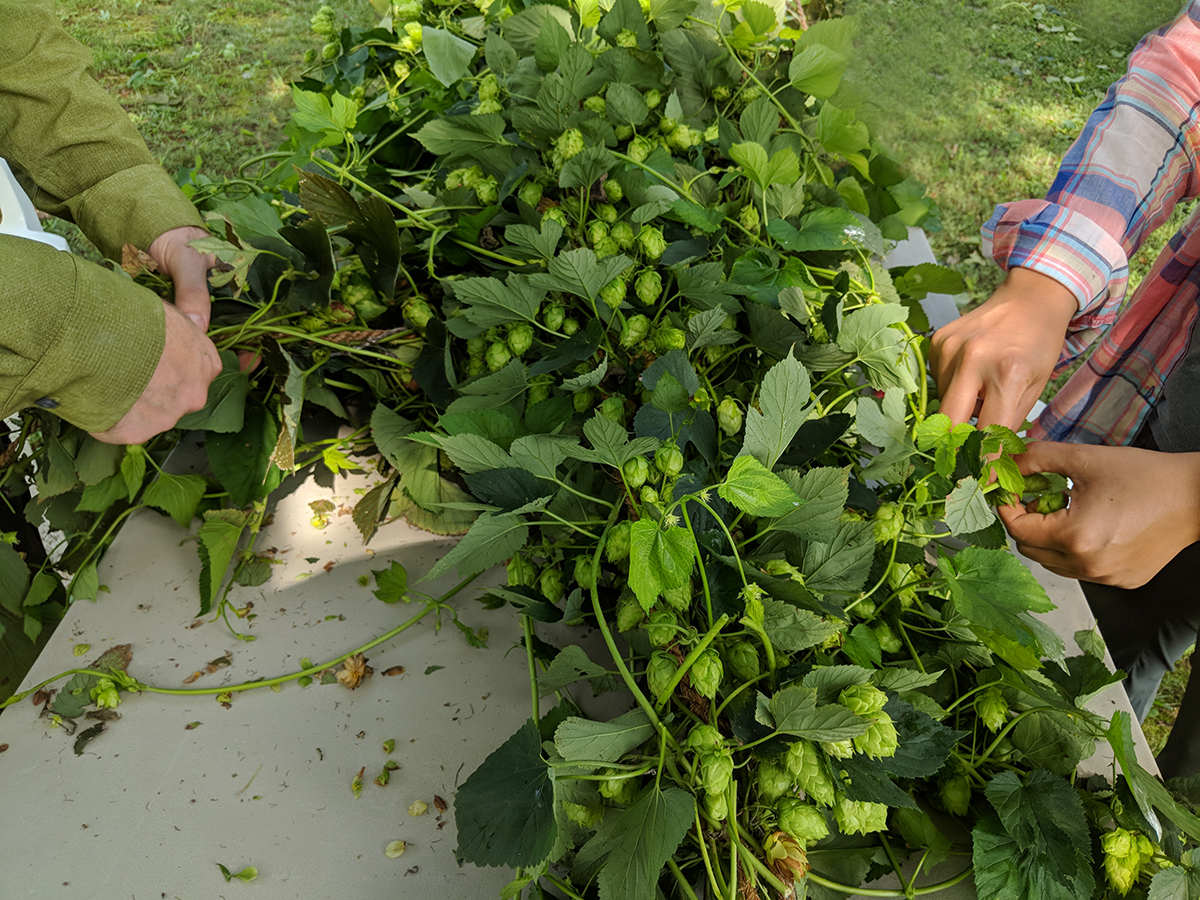 Some of the hops are sold fresh (wet) and the rest will be dried and pelletized. Photo by Debbie Roos. 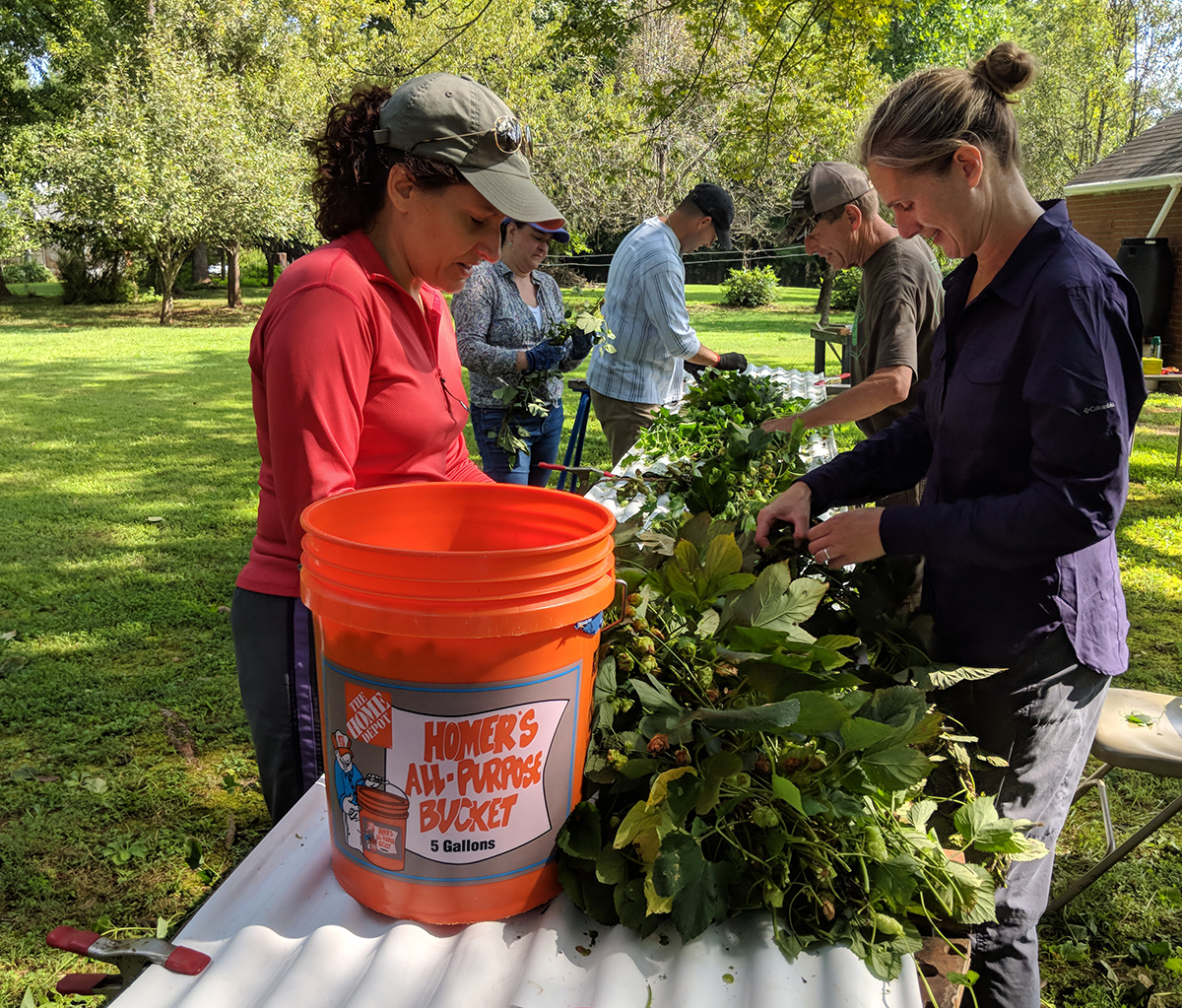 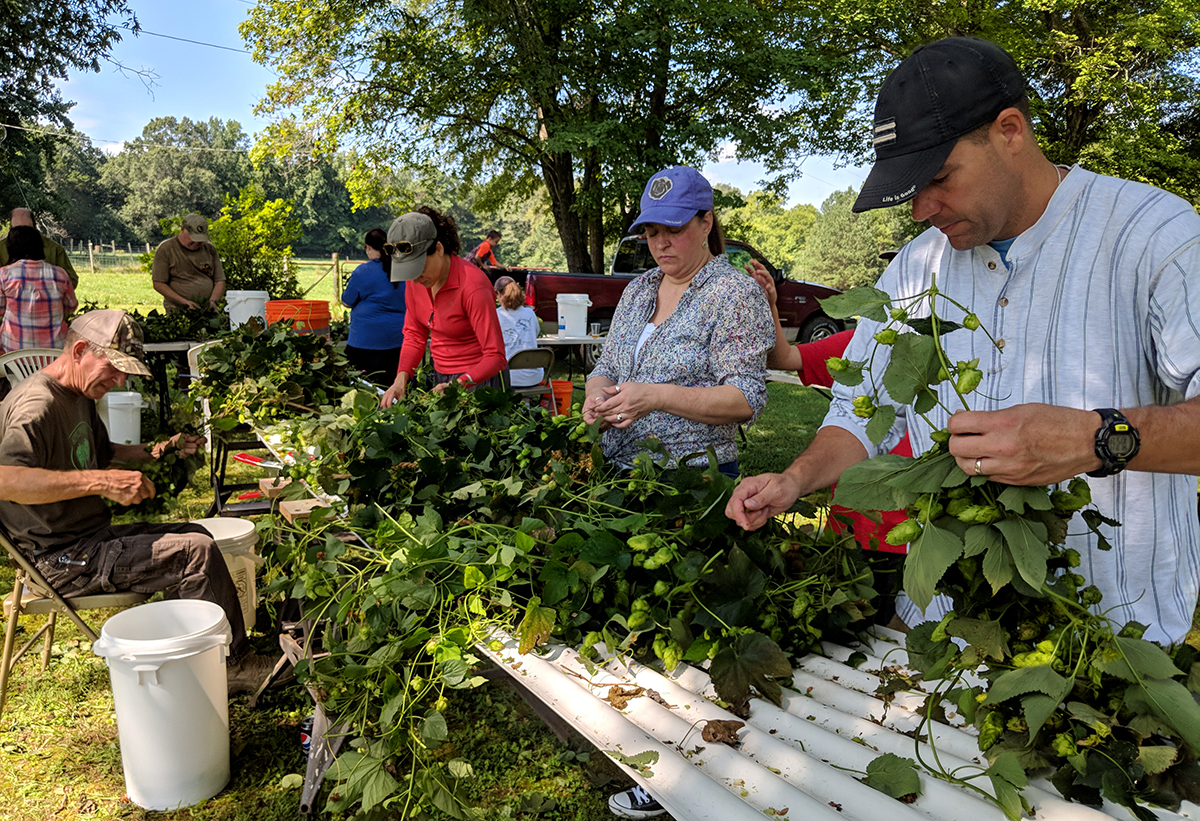 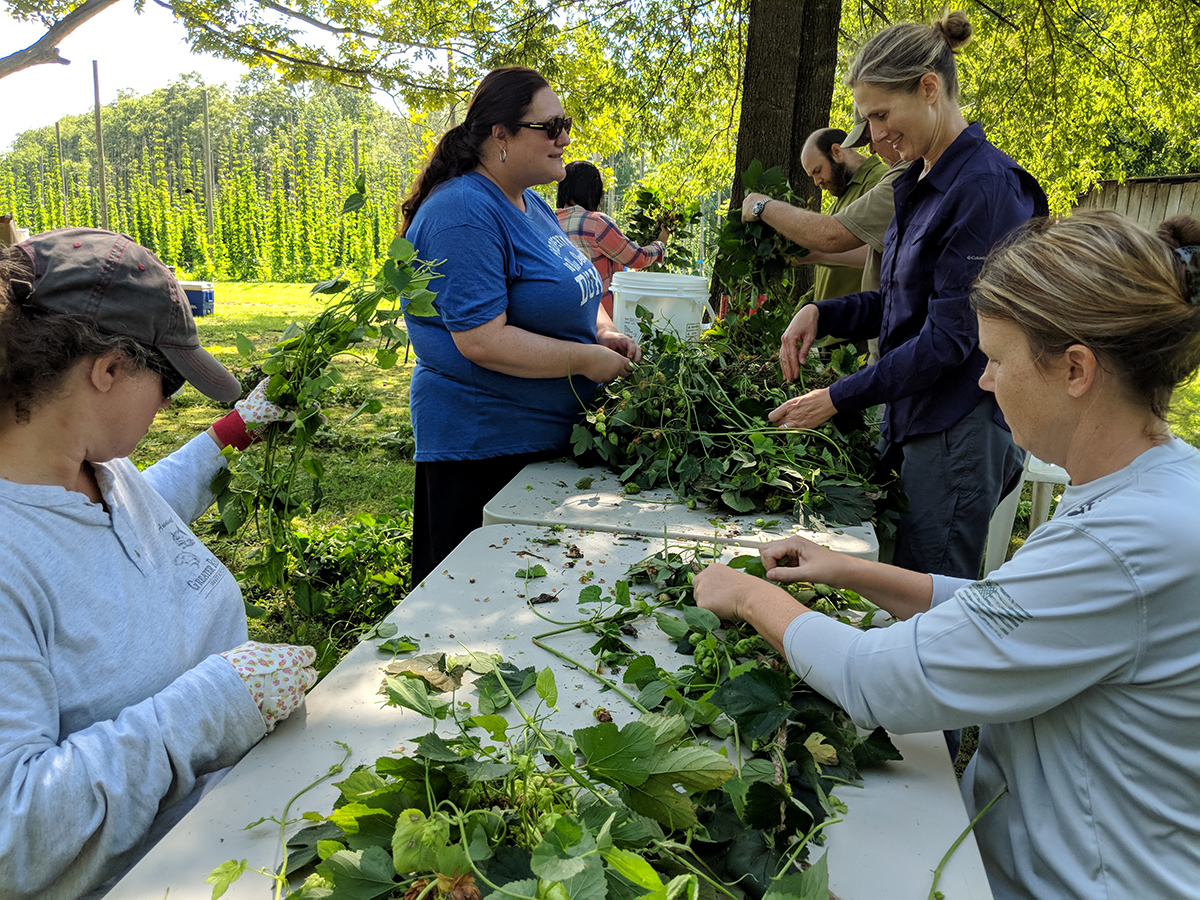 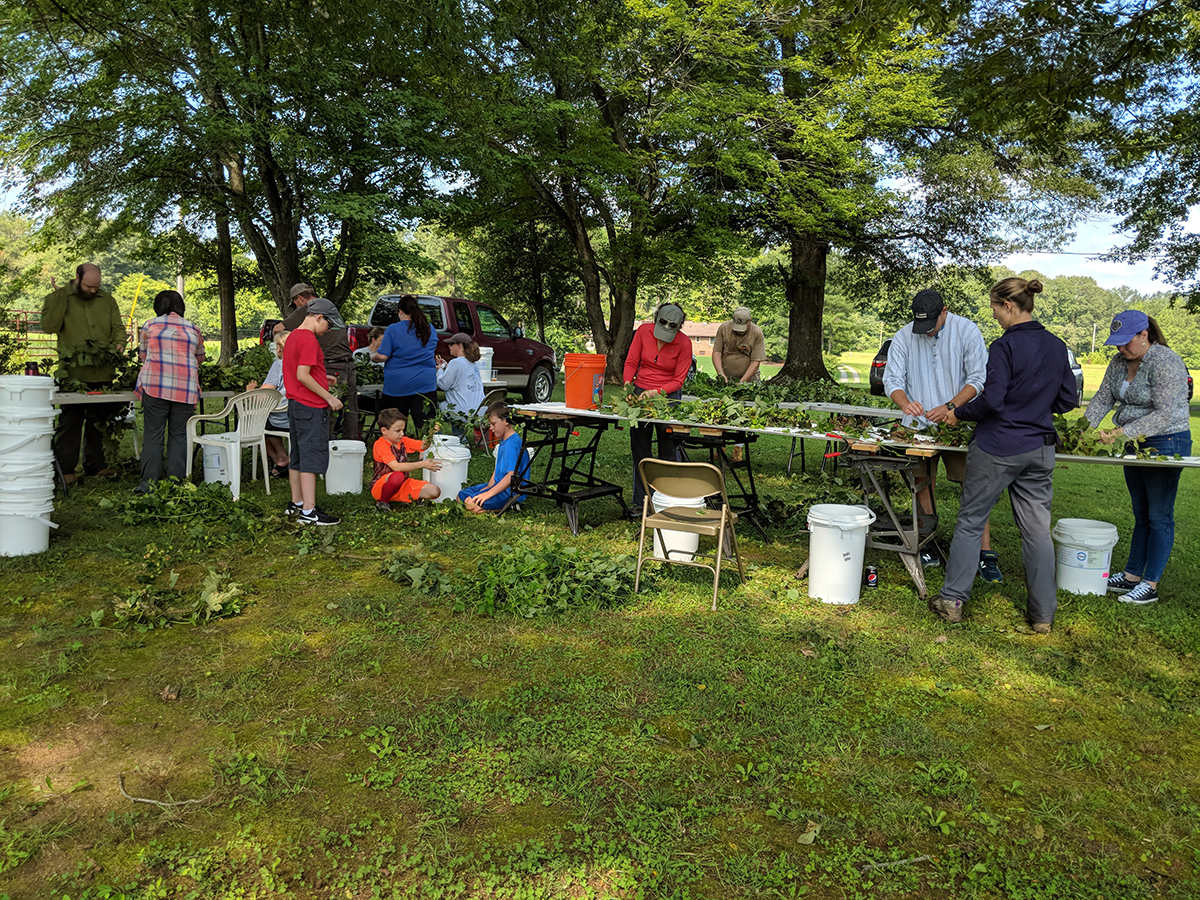 The adage “many hands make light work” certainly applies to harvesting hops! Even the kids got in on the action. Photo by Debbie Roos. 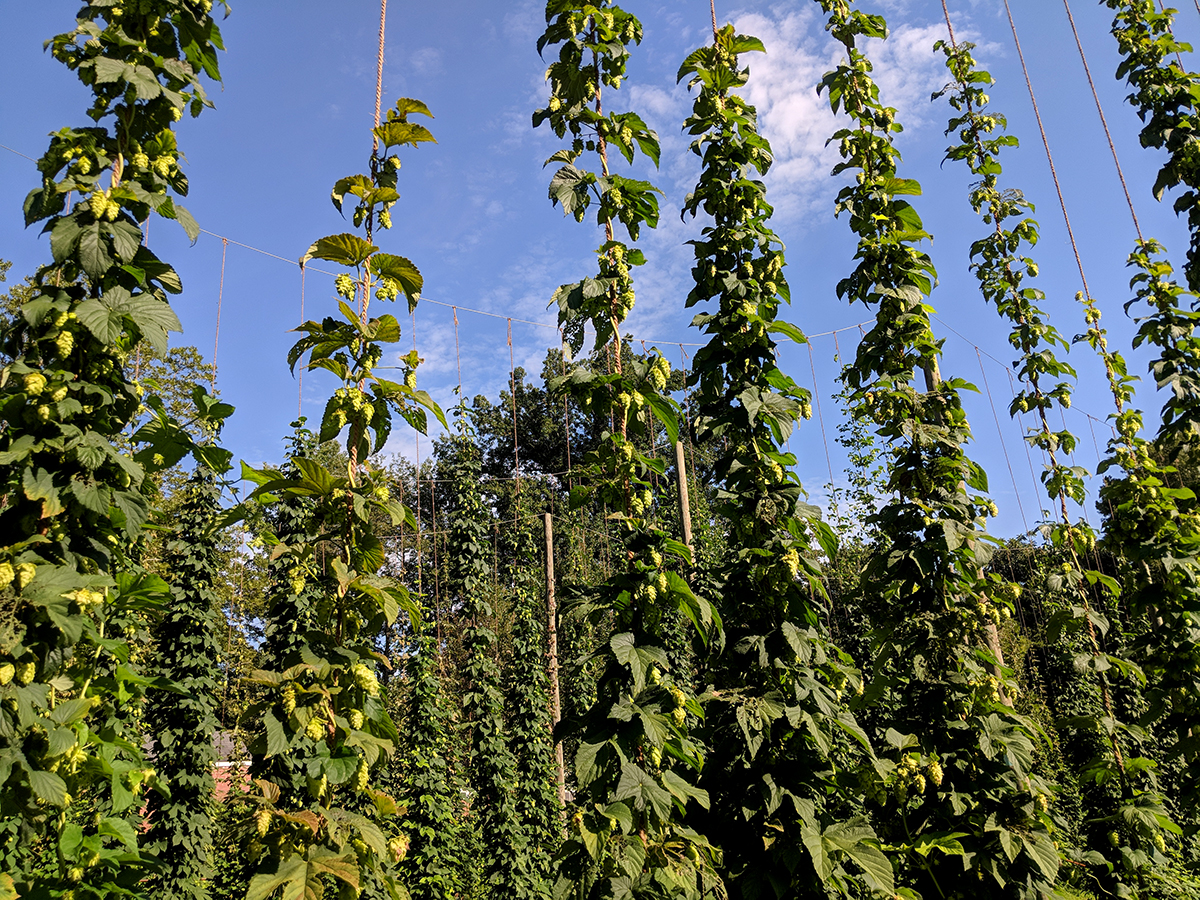