Birth of an Assassin Bug!

The wheel bug, Arilus cristatus, is North Carolina’s largest assassin bug. It gets its name from the prominent spiny “wheel” found on the thorax. Both nymphs and adults are generalist predators that feed on a variety of insects including aphids, caterpillars, bugs, beetles, and more. The bug uses its stout beak to inject the prey insect with a toxin that kills it within 30 seconds. Most of their prey are pest insects so they are considered beneficial to farmers and gardeners. They move slowly and are clumsy fliers. Their bite has been described as being more painful than a wasp sting so they should be admired but not handled. 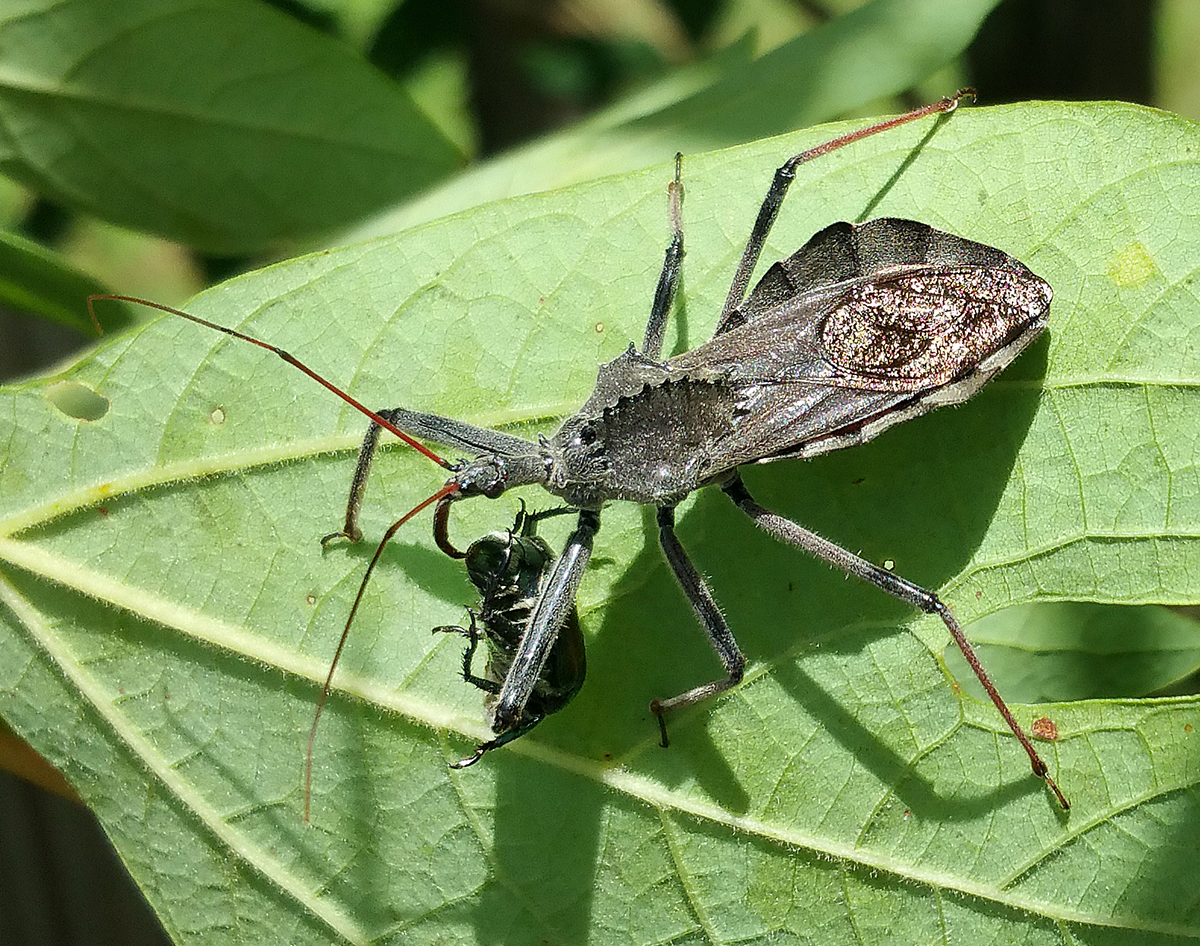 The wheel bug has one generation per year and lays eggs in late fall, usually on the branches of trees and shrubs. The eggs resemble miniature brown bottles. The eggs overwinter and the nymphs hatch from April-June. It takes the nymphs about three months to develop through five different stages before the final molt into an adult.

I spotted this egg cluster in early November last year and kept my eye on it this spring, watching for signs of activity. I was fortunate to be able to observe the nymphs hatching! They pop the top of the egg off then slowly emerge, unfurling their super-long antennae and legs. They emerge a bright yellow-orange color then quickly change to red and black. Their appearance changes slightly with each molt. Such a cool process to witness! 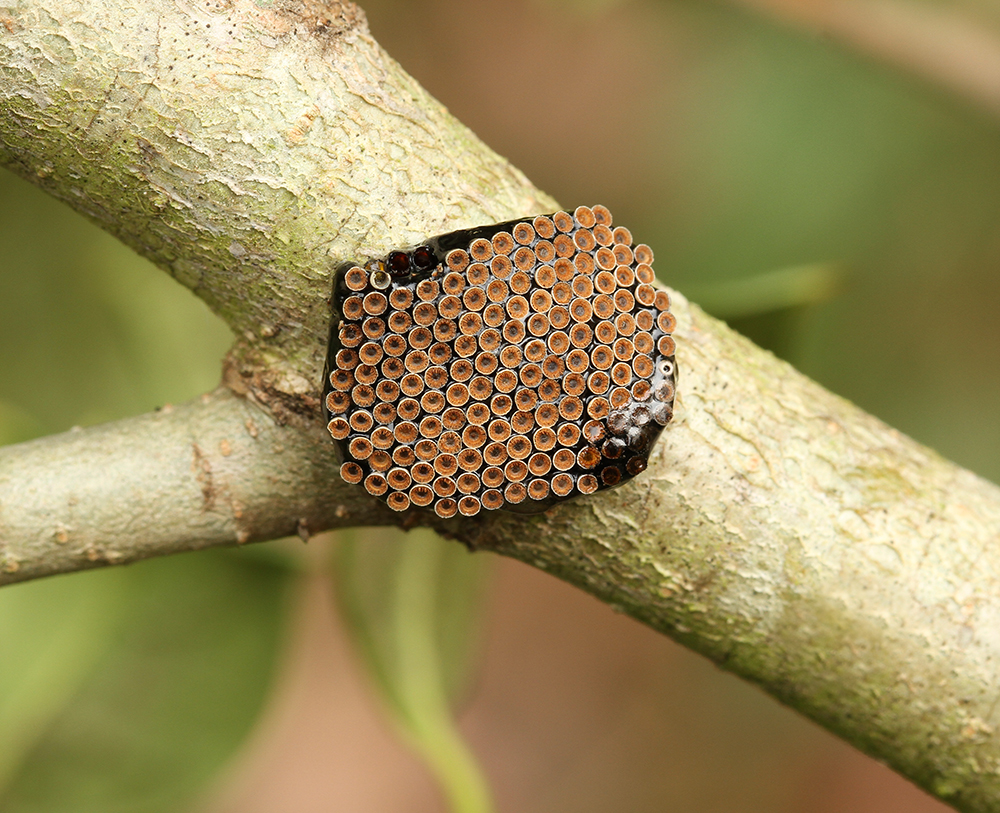 Wheel bug egg cluster on holly branch. Egg masses are usually found within four feet of the ground. This one was spotted in early November. Photo by Debbie Roos. 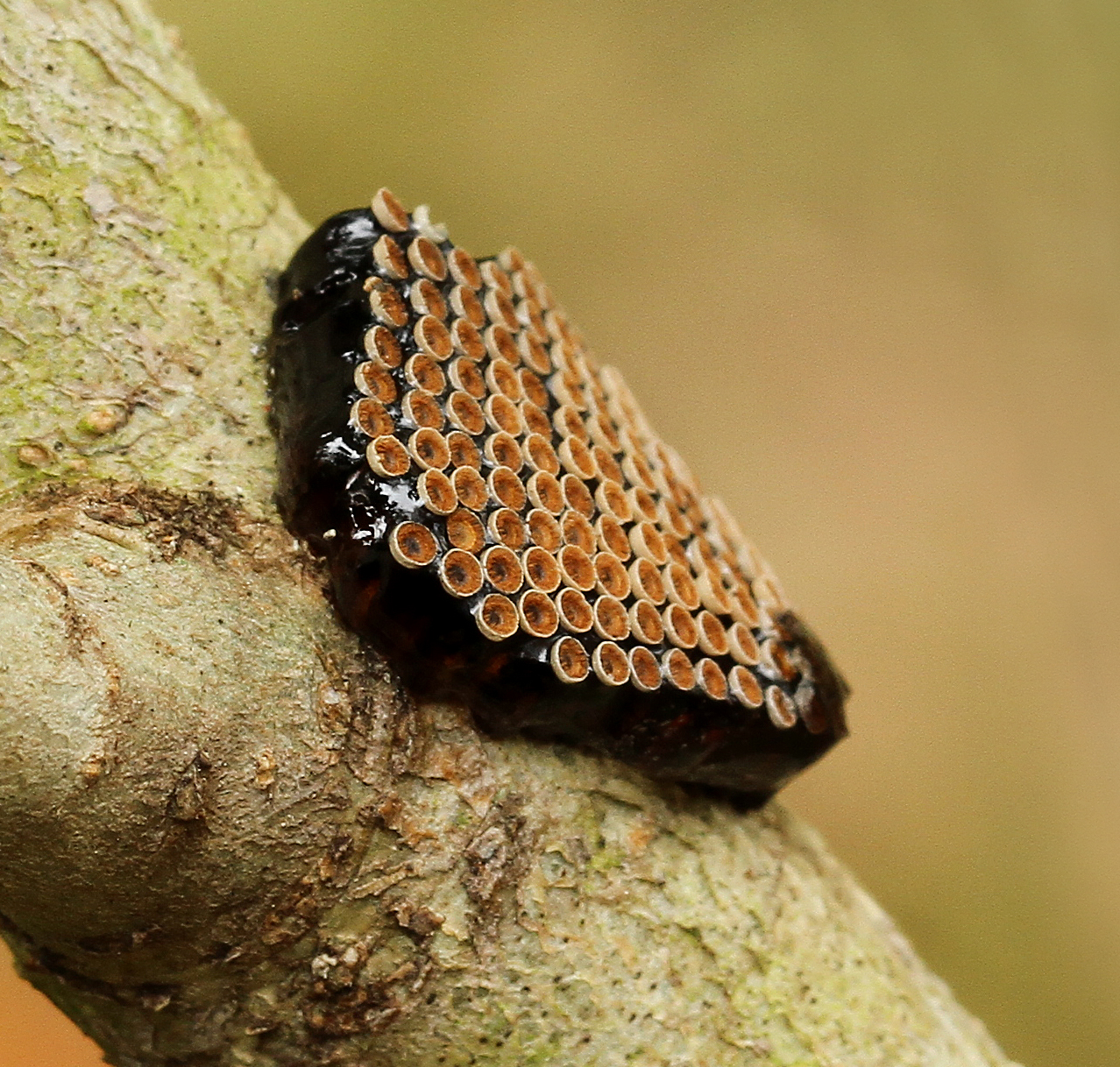 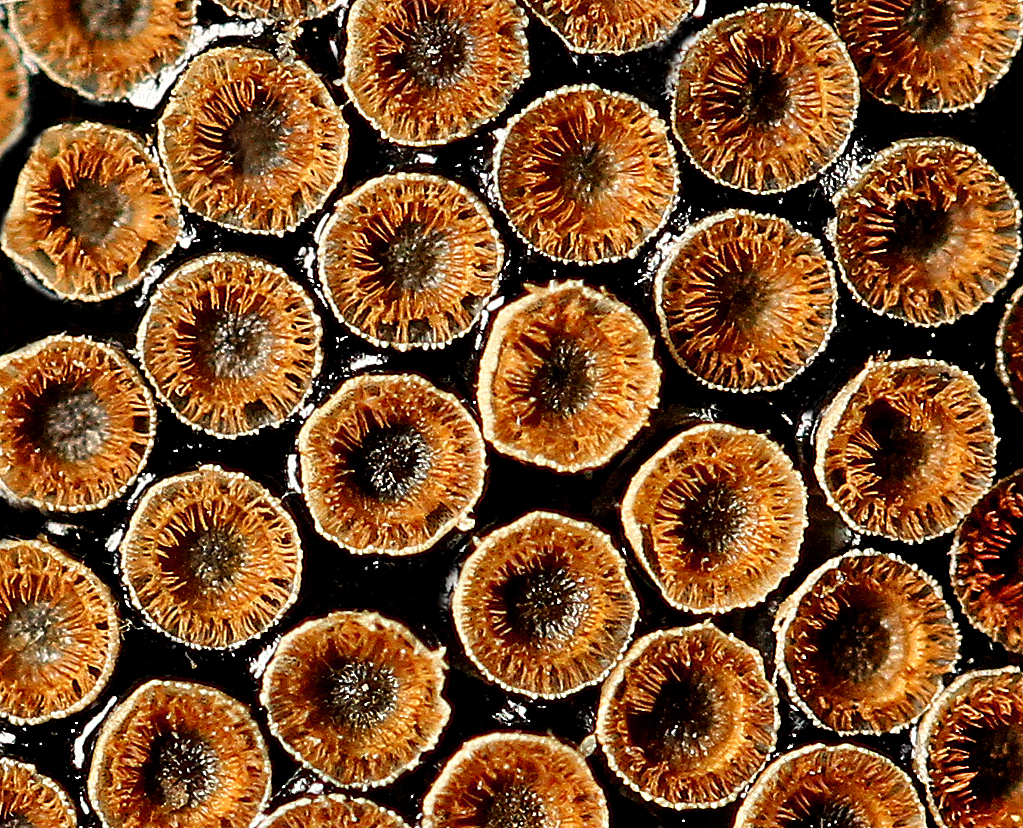 The nymphs are bright yellow-orange when they hatch in the spring. They quickly turn bright red and then darken as they molt. Nymphs do not have the distinctive wheel or crest of the adults. 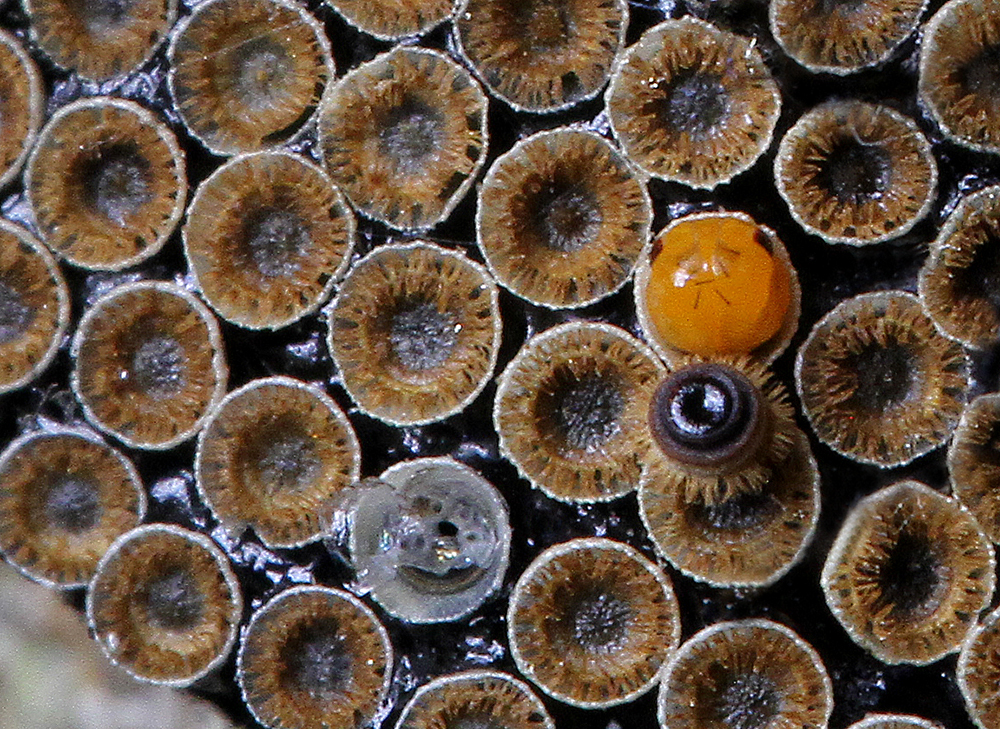 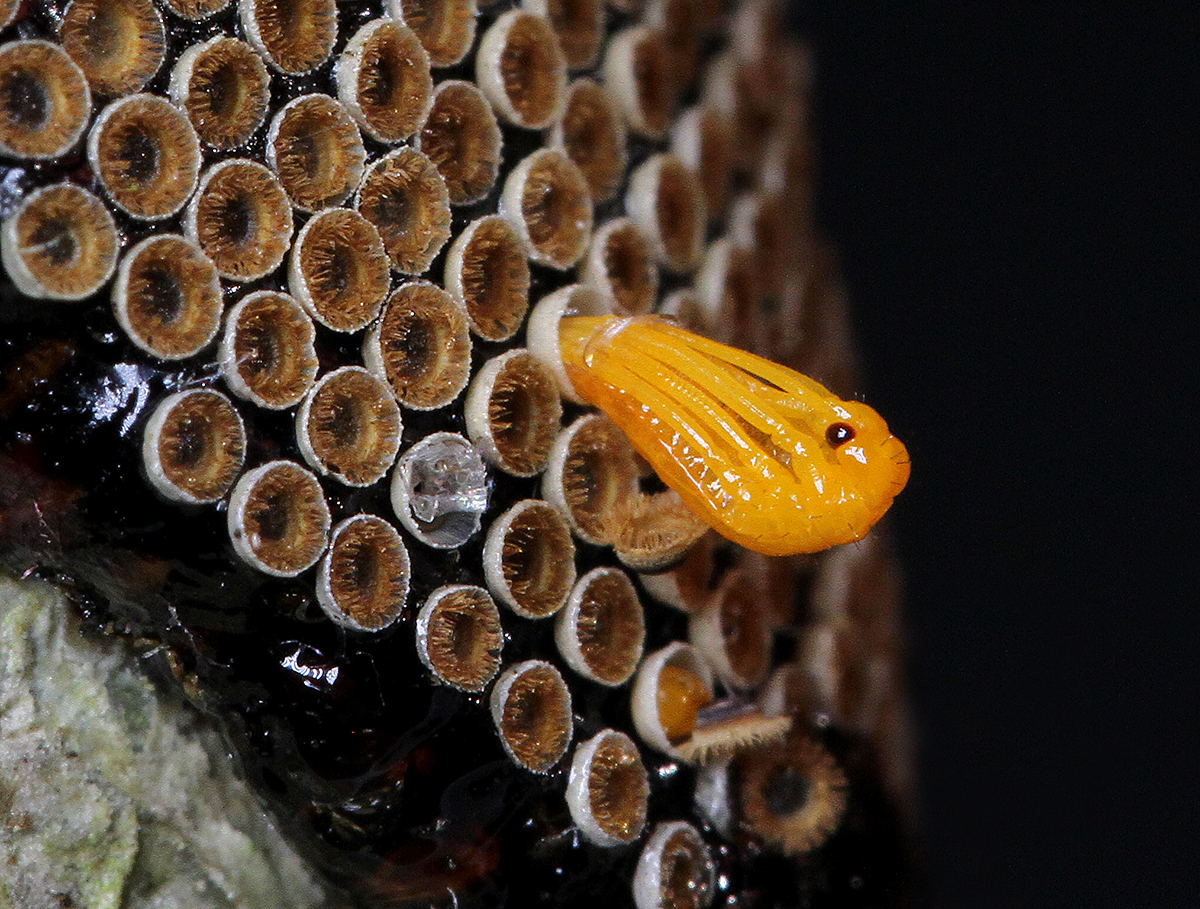 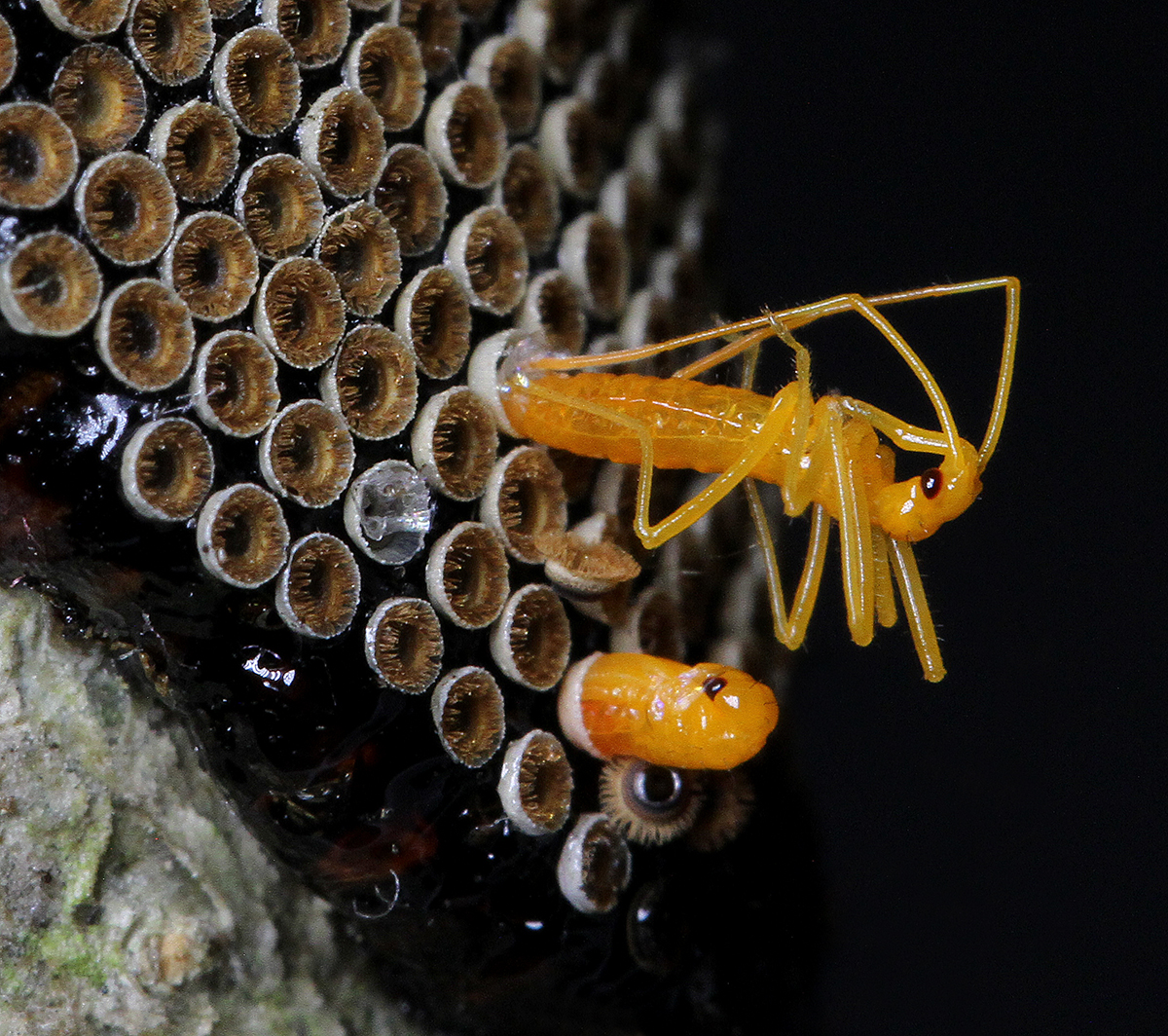 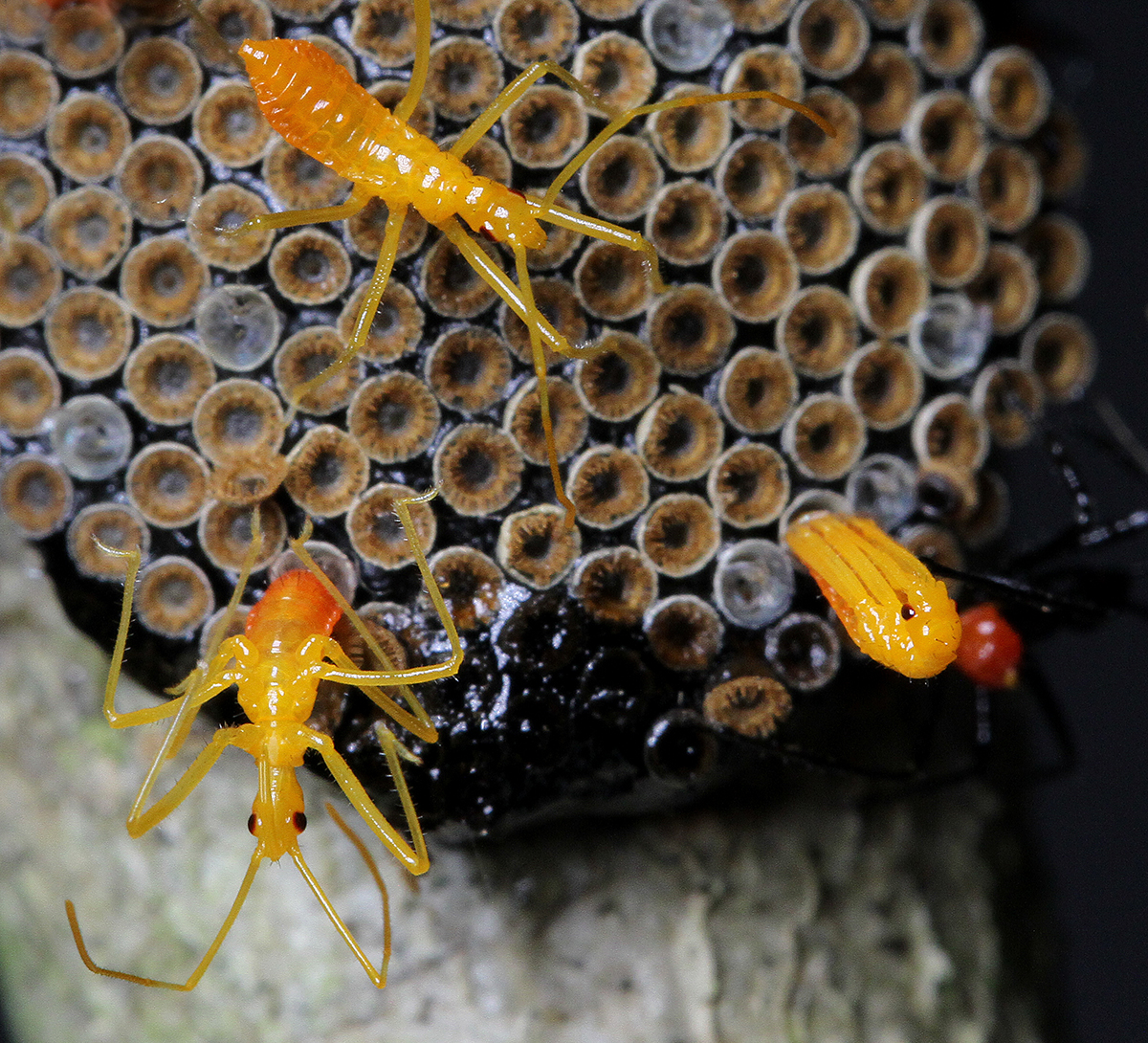 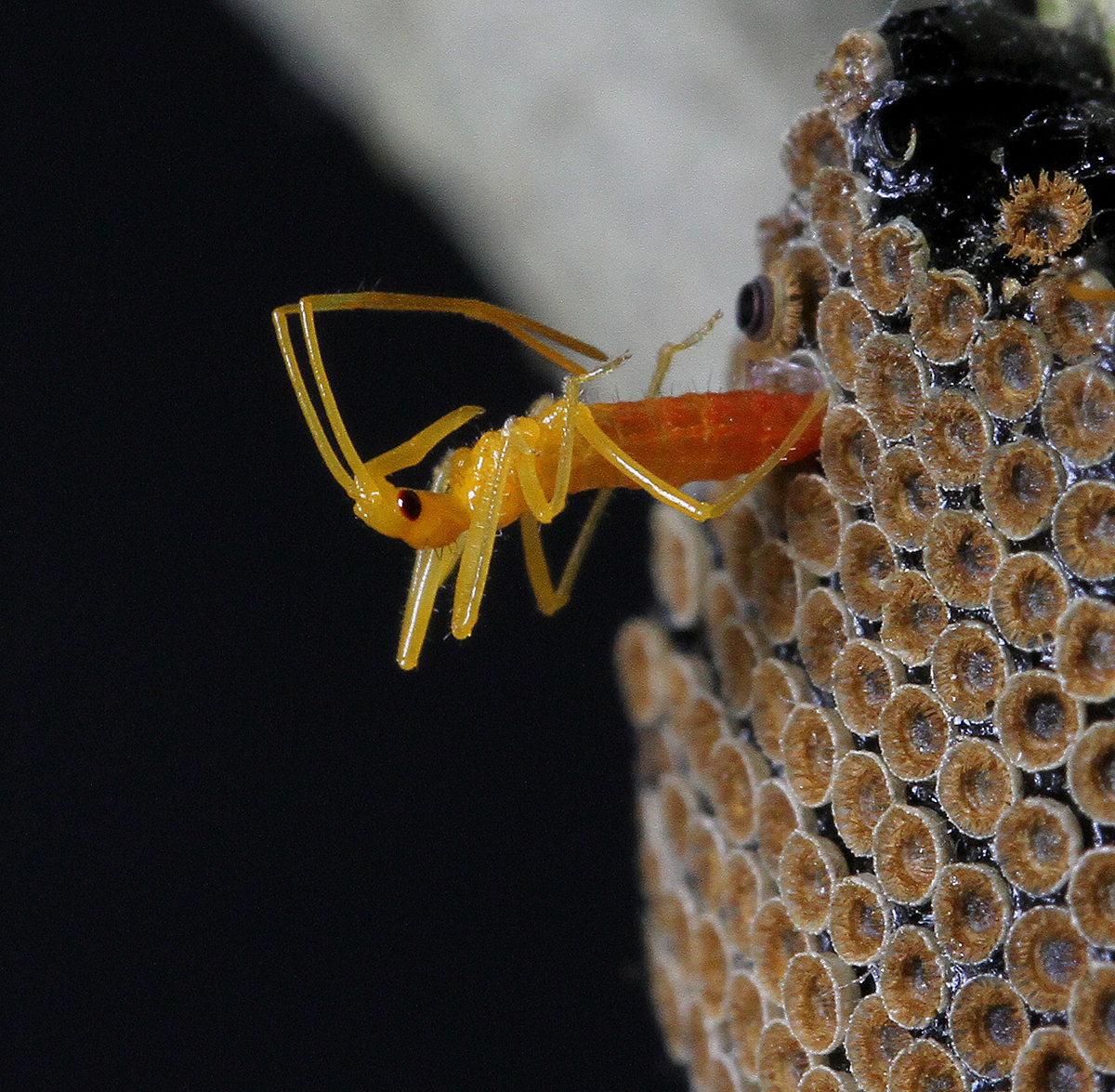 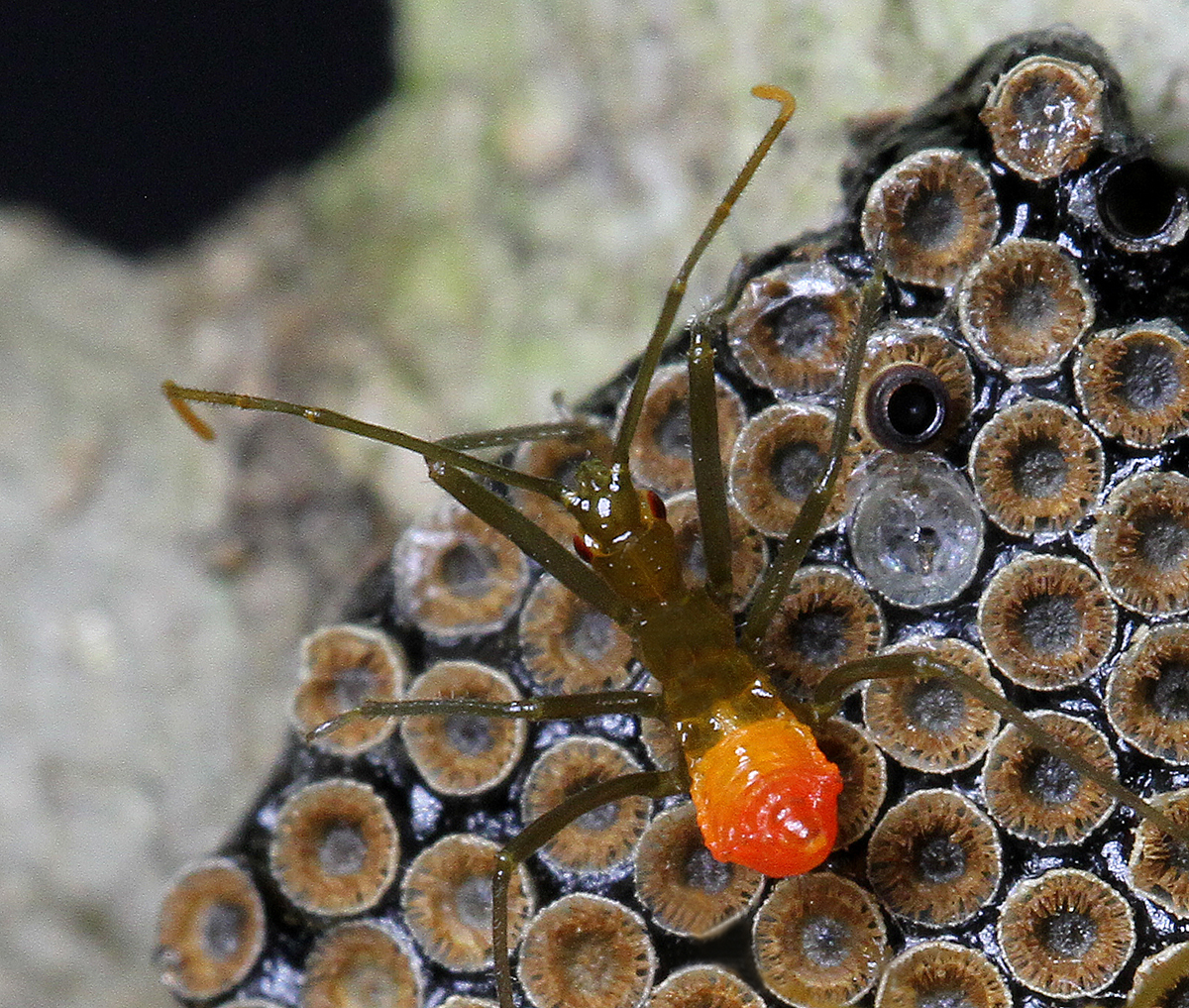 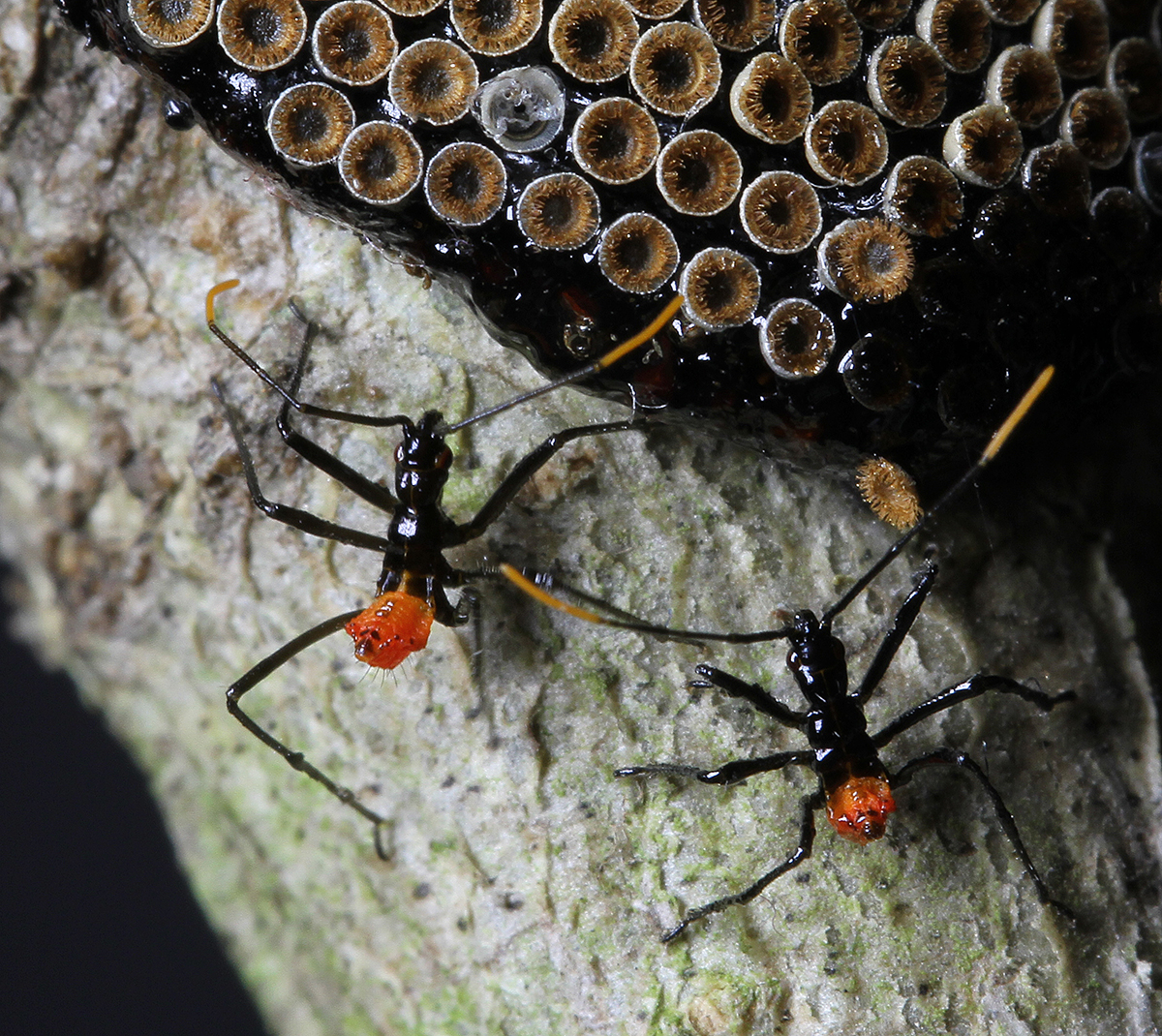 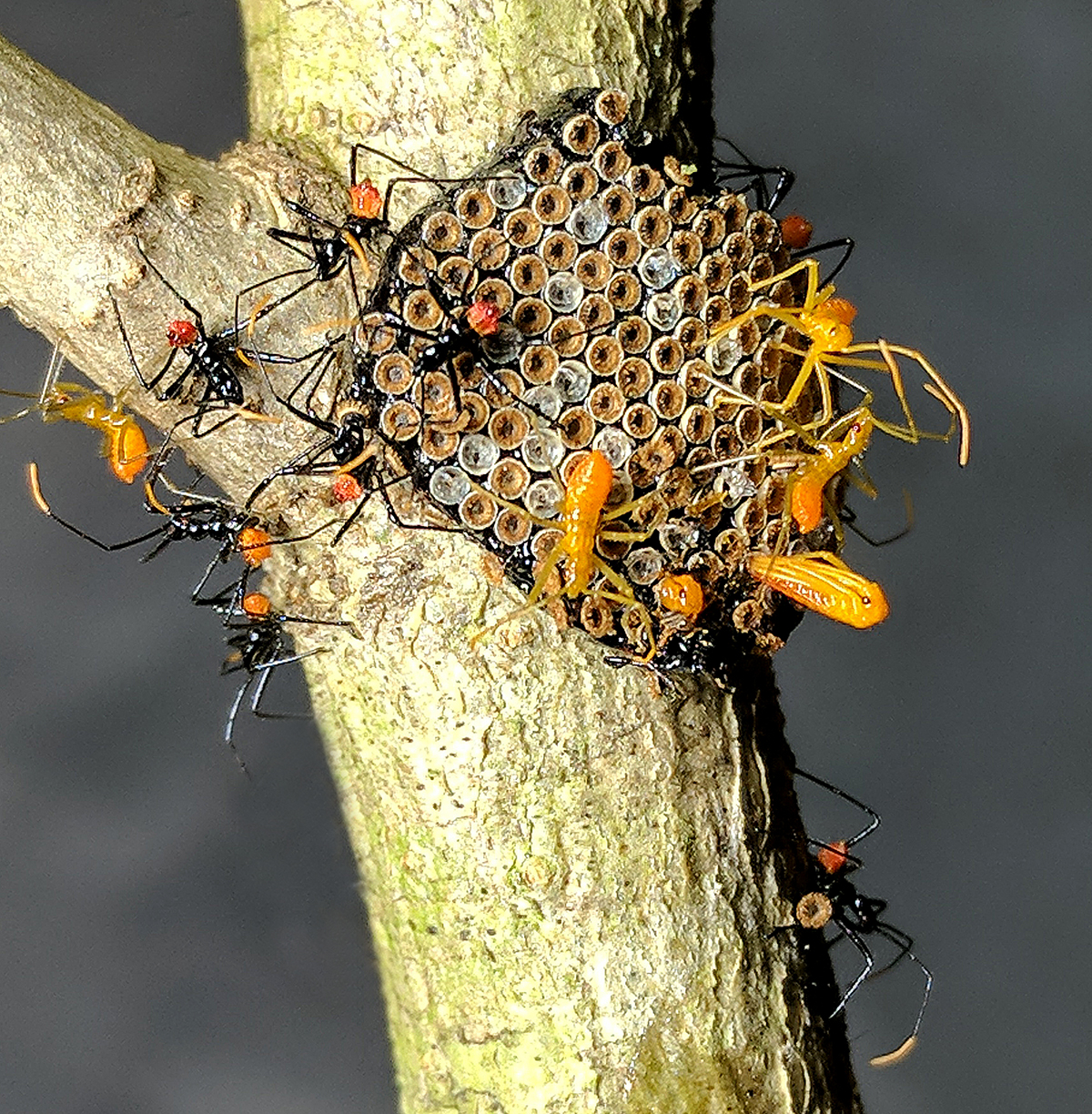 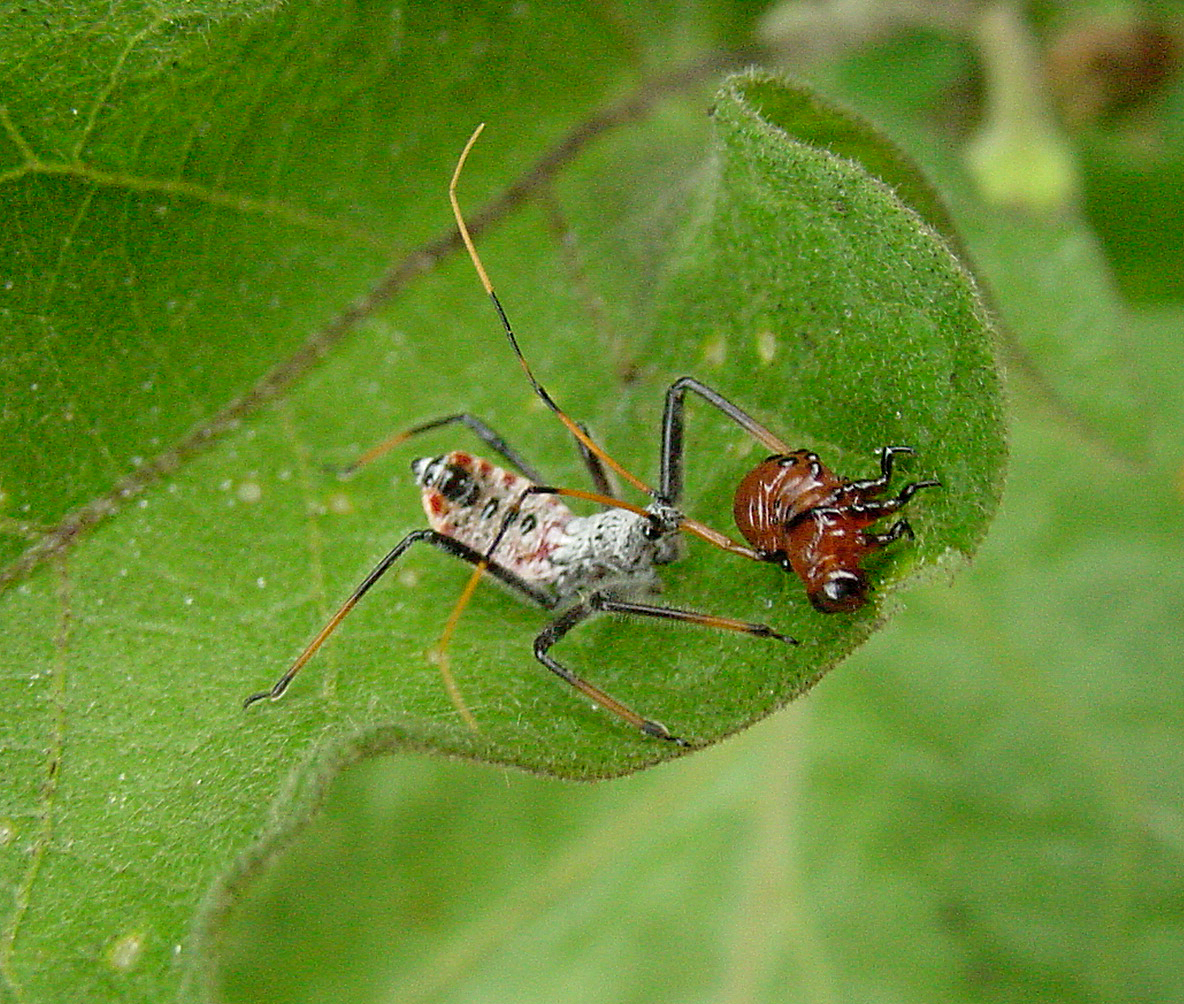