Find this article at:
go.ncsu.edu/readext?406480
— Written By Debbie Roos 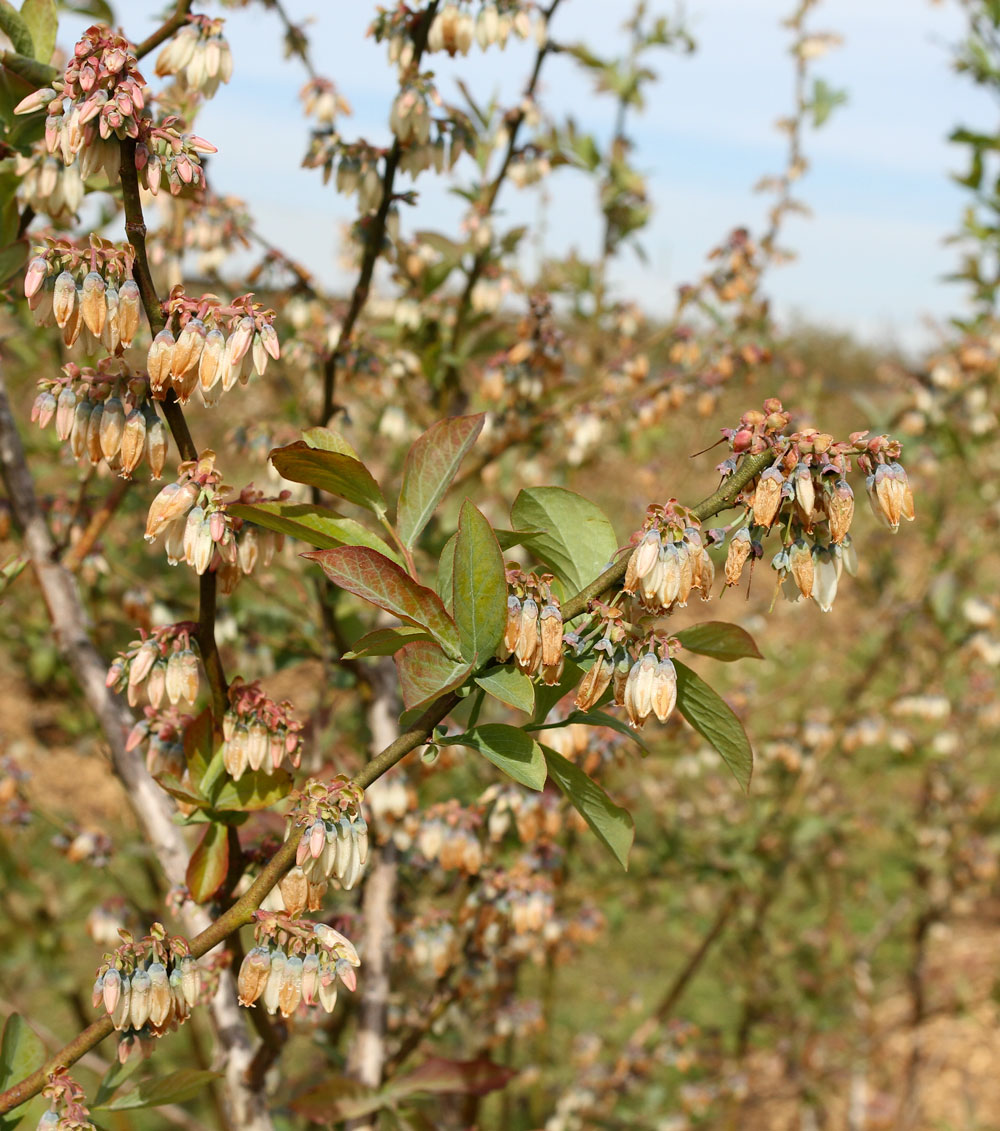 The temperature plunged to around 25°F in parts of Chatham and many surrounding counties in the early morning hours of April 6, 2016. Another freeze occurred the morning of April 10 with similar low temperatures. The timing of this freeze was unfortunate for our local fruit crops because many of them were blooming or had young fruit and were very vulnerable to damage from such low temperatures.

I checked in with some local growers and visited a local orchard to inspect the damage. Below are my findings.

The blueberry crop was hit hard, as many of the blueberry varieties had fully open blossoms and even small fruit. How susceptible are blueberries to freezing temperatures? It depends on the growth stage: the blueberry flowers become increasingly vulnerable to freeze damage as they expand from tightly closed to fully open flower. A tightly closed bloom can withstand temperatures as low as 24°F, while a fully open bloom can be damaged at 28°F. The stage most vulnerable to freeze damage is after the petals have fallen off and small green fruit have formed – they can be damaged at 32°F.

See photos of the different growth stages of blueberries. 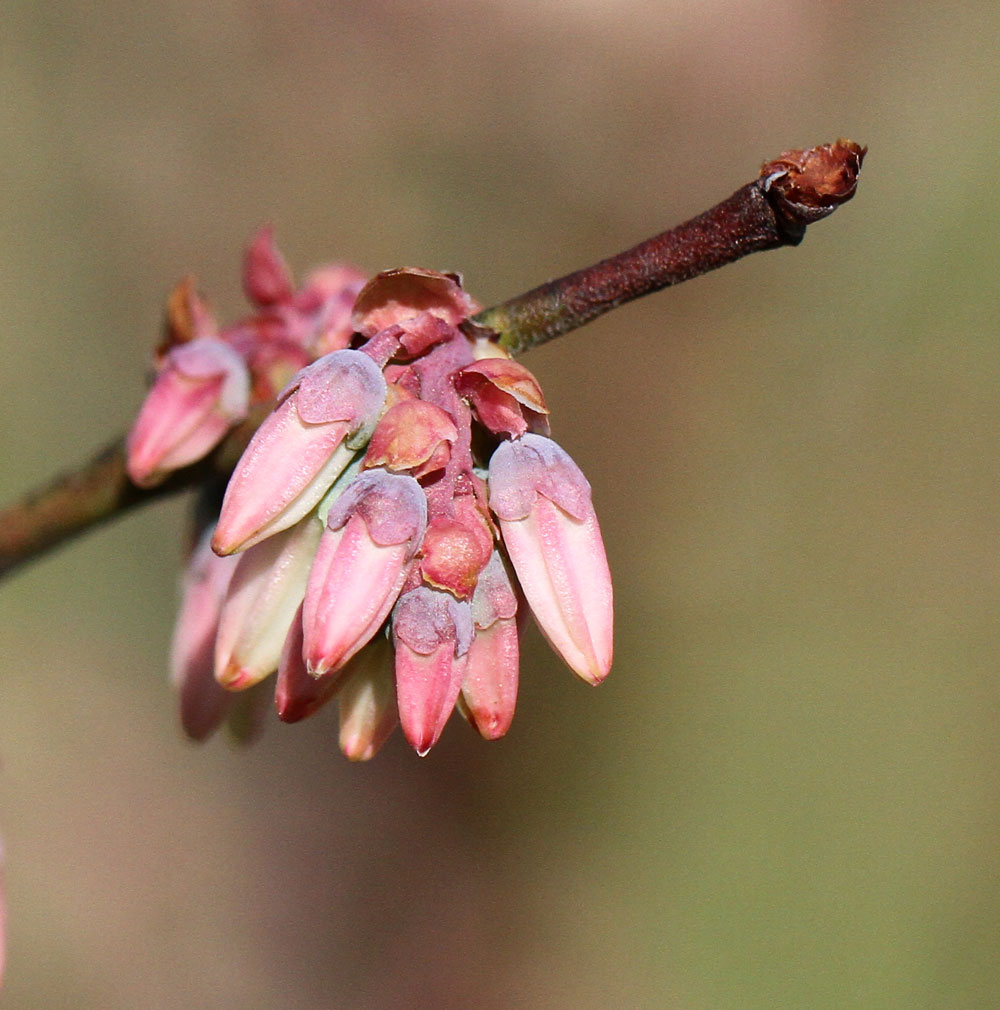 See some cheerful “before” photos of the blueberry blossoms and their pollinators, taken the last week of March.

Below are some sad “after” photos taken at a Chatham County farm on the afternoon of April 6th, the day of the freeze. 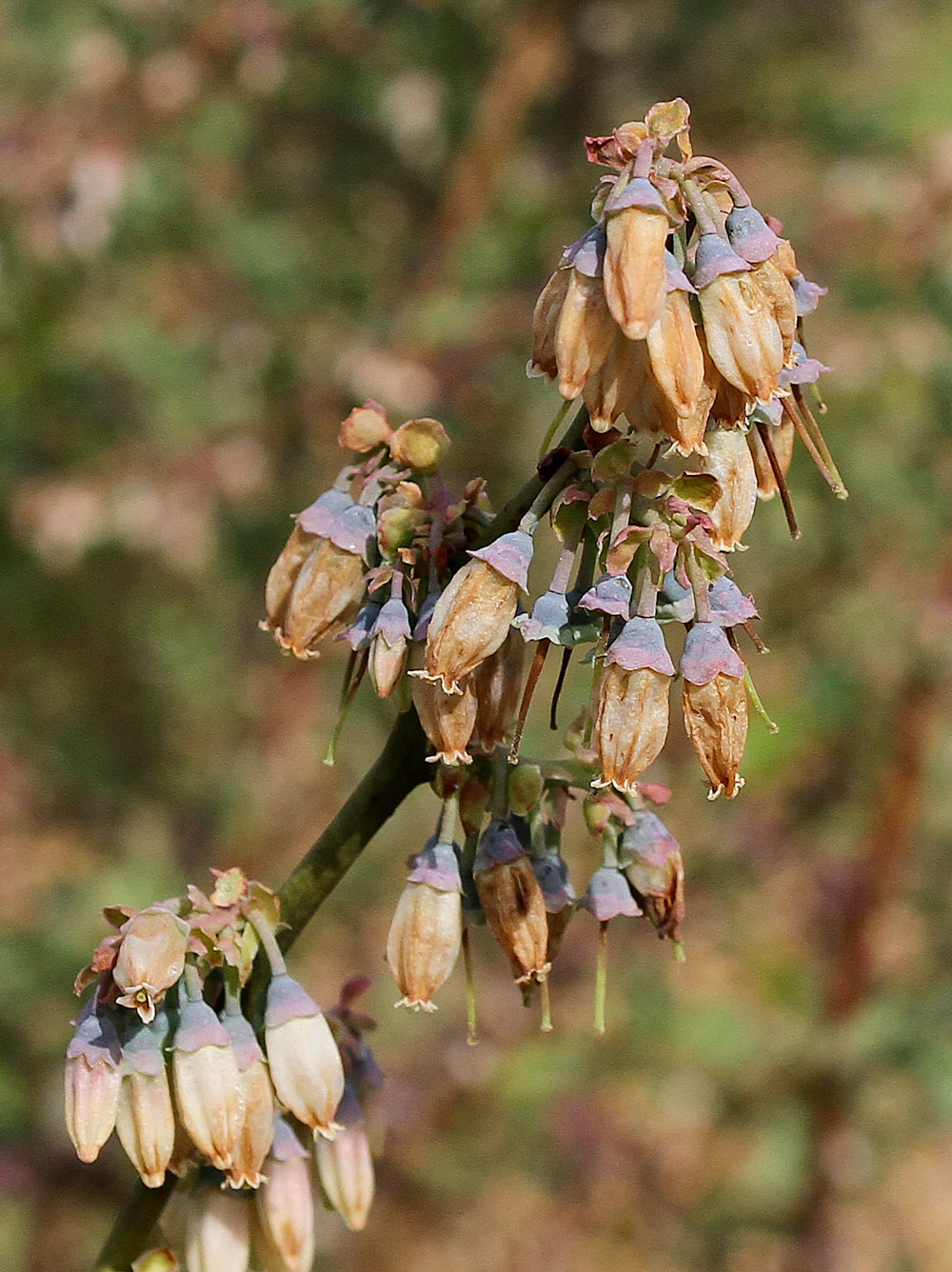 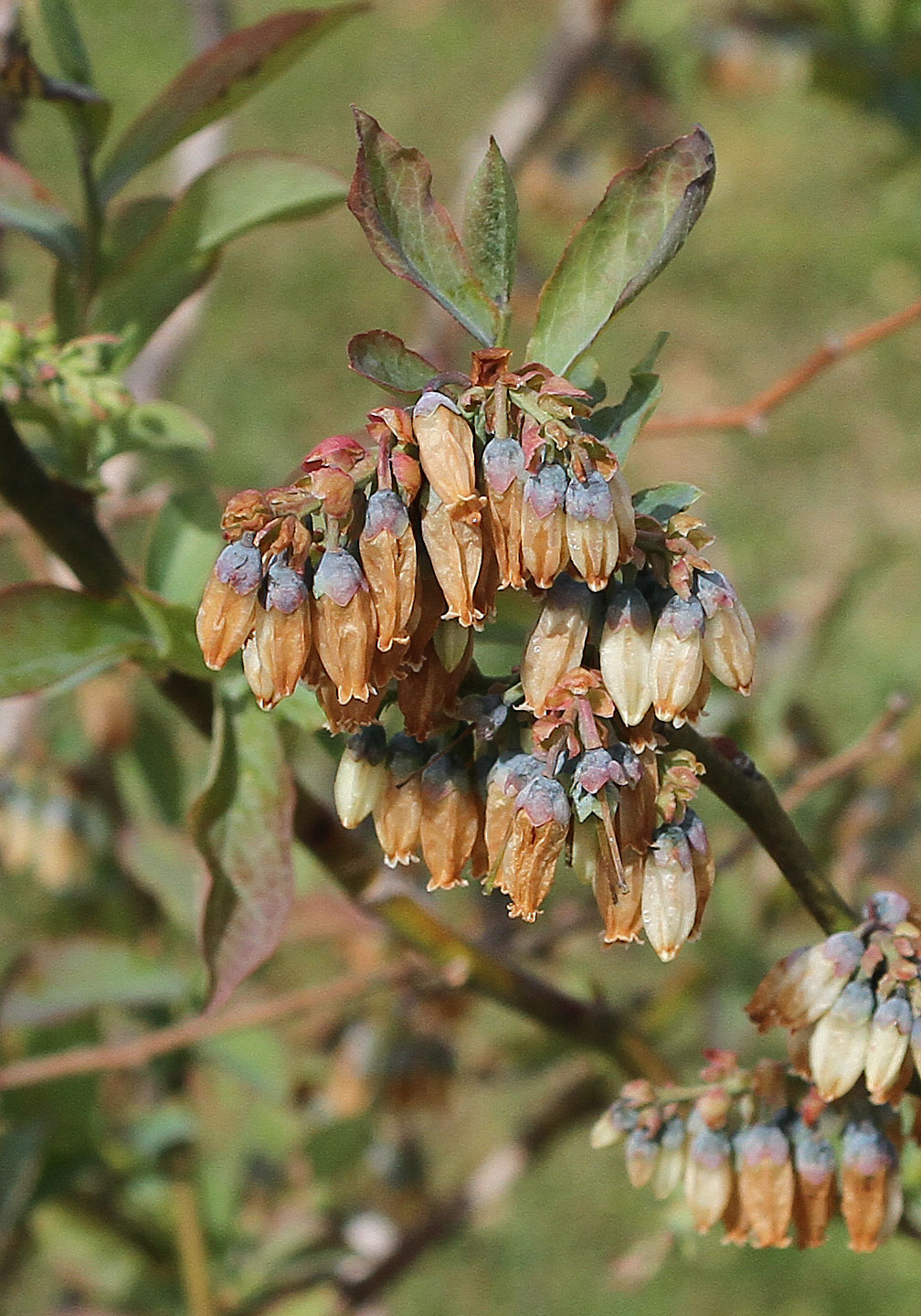 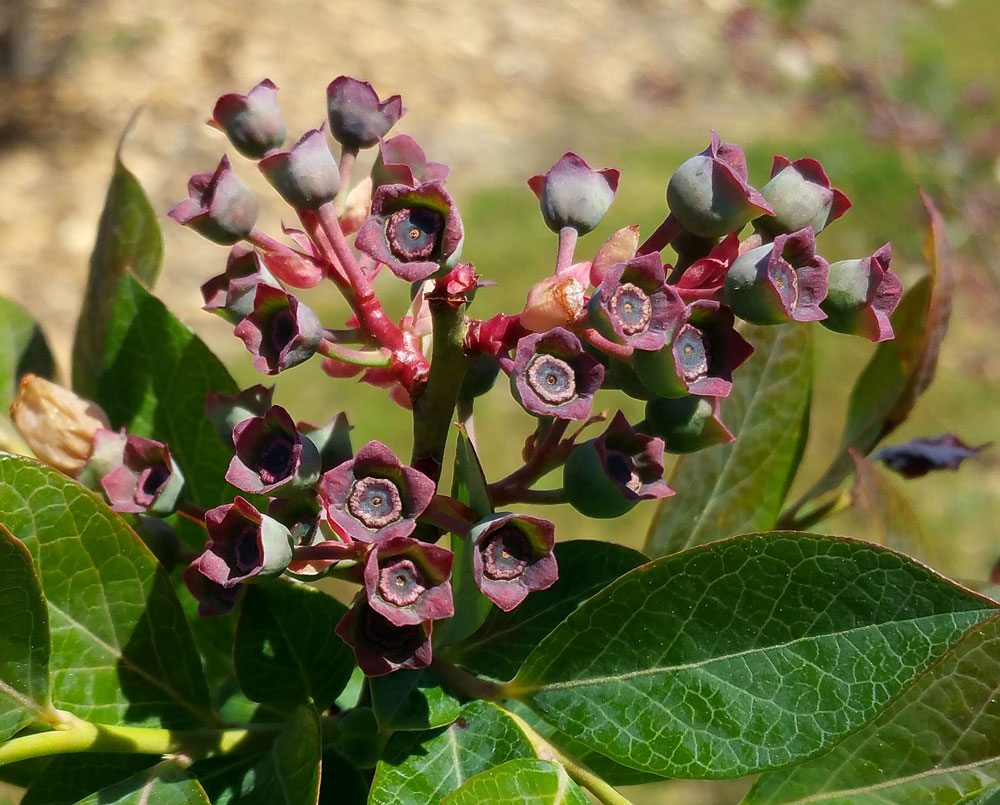 The small green fruit are most vulnerable to freeze damage and can be damaged at 32°F. Photo by Debbie Roos. 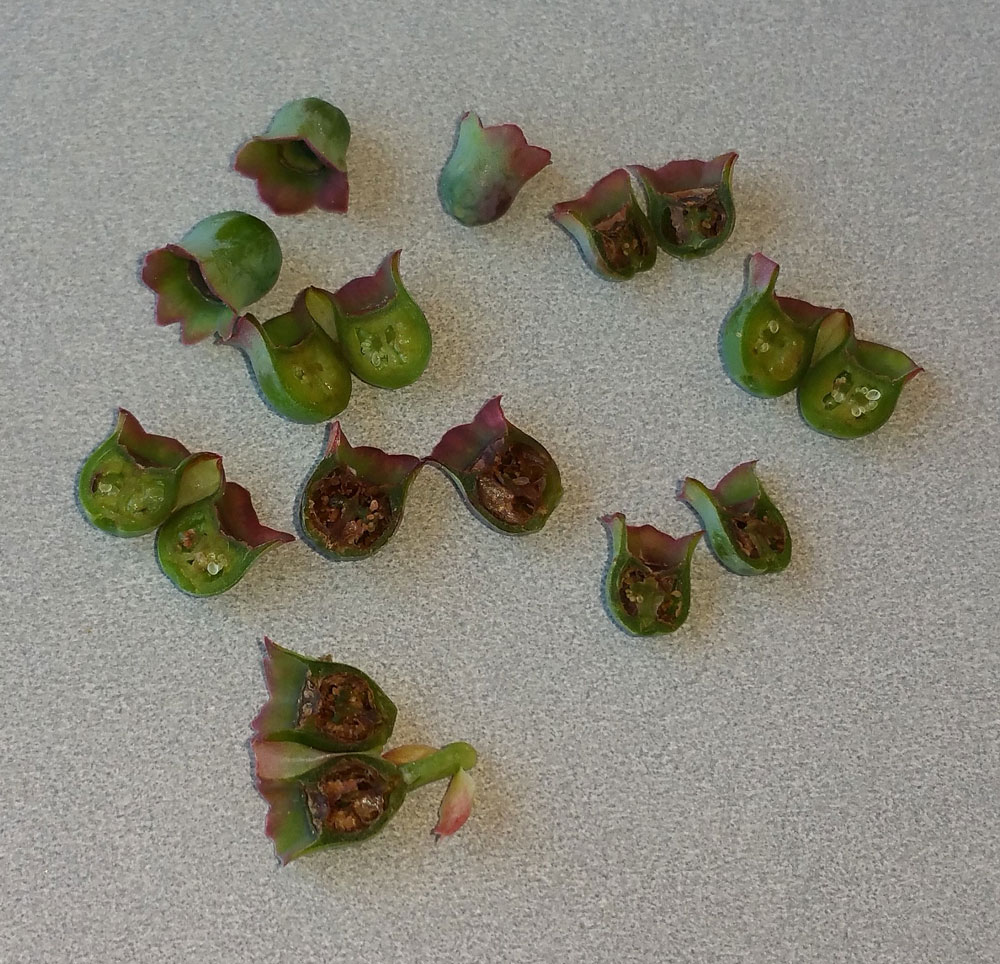 This photo shows both healthy immature green blueberries with white ovules and freeze damaged berries with a brown interior. Photo by Debbie Roos.

Unfortunately once blooms have been damaged there isn’t much you can do. They don’t recover from that and they don’t produce more flower buds until later in the season (for the following year). A good way to manage risk is to have multiple varieties of blueberries that bloom at different times. That way any single freeze event won’t take out the entire crop.

I checked in with our North Carolina State University Blueberry Specialist Bill Cline to see how widespread the crop damage to blueberries was. About 95% of North Carolina’s commercial blueberry production (close to 10,000 acres) is in the southeastern part of the state in Bladen and surrounding counties. These large-acreage growers use overhead irrigation for freeze protection, so their blueberry crop survived the freezes. However, Bill said that many of the smaller-scale pick-your-own blueberry farms spread around the state likely suffered significant crop damage if they had blueberry bushes at a vulnerable stage because many of them are not able to use frost protection if they don’t have enough water to run the overhead irrigation all night long.

“Freeze protection with overhead irrigation keeps plants at the freezing point of water (32°F) and thus prevents damage from subfreezing temperatures, but only if the irrigation runs continuously from the time the temperature drops until it comes back up above freezing, and the ice is melting. For instance, we typically start irrigating for freeze protection at the research station in Castle Hayne when the falling temperature drops to around 34°F, and run until the temperature comes back up the next morning — usually about 8 hours, sometimes more, of continuous wetting.

A coating of ice by itself provides no benefit — ice is a poor insulator, and in any case the plant has little inherent warmth to trap. The heat that protects the plant comes from constant wetting – the continuous transformation of water to ice. This “phase change” (liquid to solid) releases heat and keeps the plant underneath the ice at a constant temperature — and since water freezes at 32°F, the plant stays at about 32°F as long as ice is being constantly formed. Once the irrigation is turned off, protection stops.

If the temperature is below freezing and a coating of ice has formed, cutting off the irrigation at that time causes more damage than would normally occur by doing nothing.

I would not run any irrigation unless I could run it all the way through the freeze event, start to finish. This takes a tremendous amount of water (5-6 gallons per minute for a single sprinkler, x 12 sprinklers per acre = 72 gallons per minute per acre) and the folks who do it successfully usually have access to surface water (ponds, streams) since few wells have that much capacity.

The Good News on Blueberries

It’s always good to reevaluate the damage several days after a freeze event. Often the damage is not as bad as it first appeared. As I mentioned above, blueberry blooms have a varying degree of vulnerability to freezing temperatures depending on their growth stage, and having different stages of bloom can mitigate risk. I went back to the farm on April 11 and saw lots of open white blooms with more to come, so the freeze definitely had an impact but there will still be a crop. It may turn out that the freeze just did a really good job of thinning the fruit! 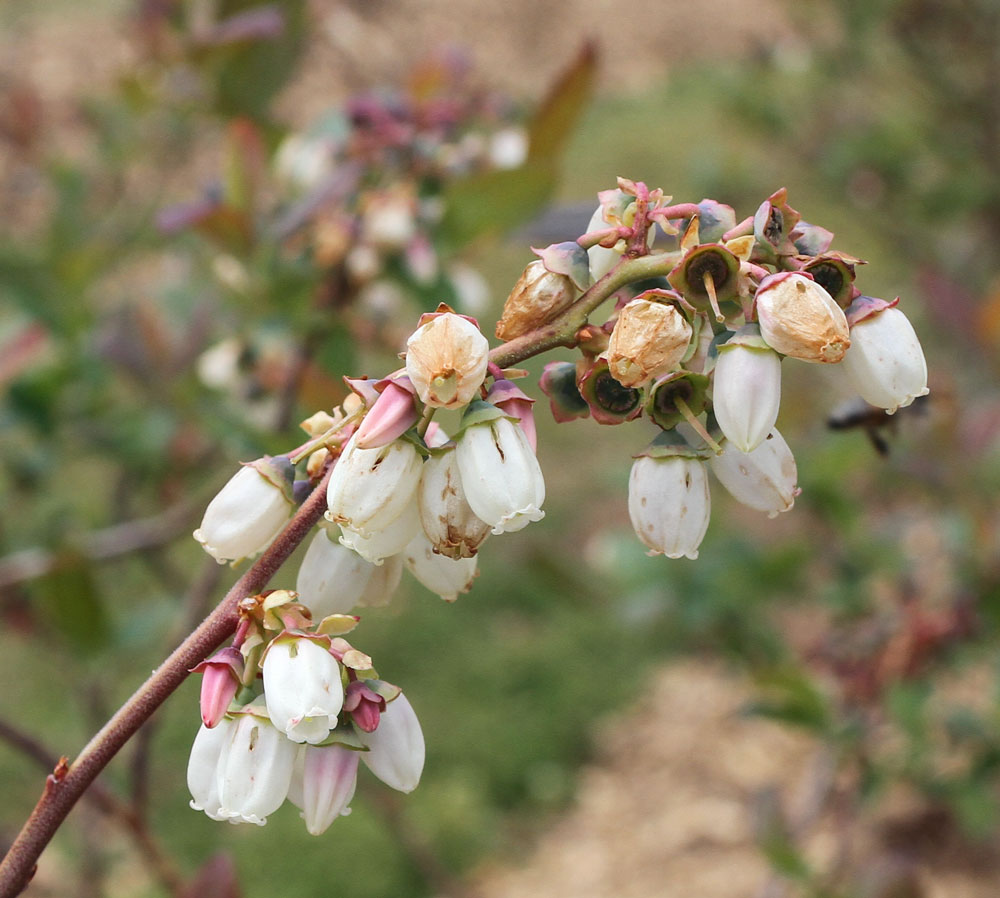 Blueberry blooms on April 11, after two nights of temperatures around 25° F. Many pollinators were actively visiting the blooms. Photo by Debbie Roos. 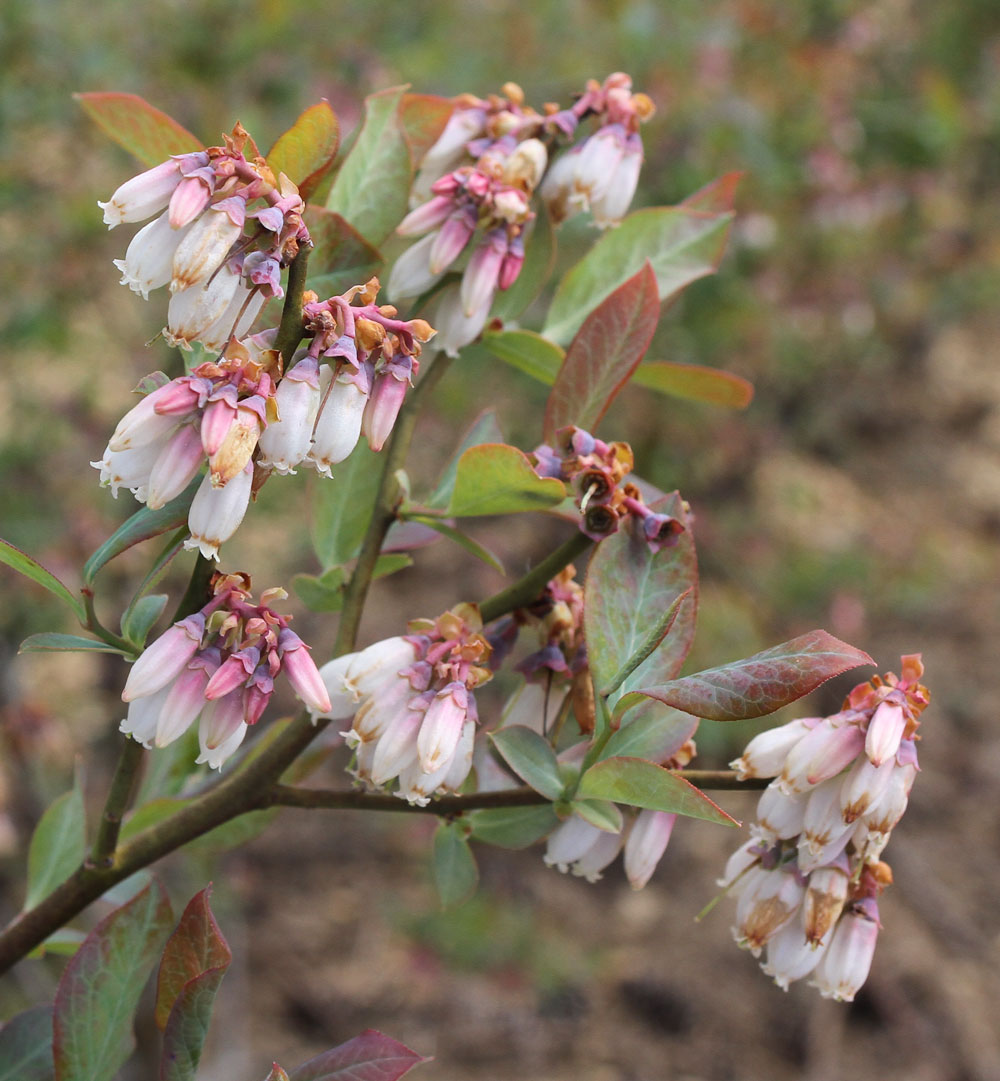 Blueberry blooms on April 11, after two nights of temperatures around 25°F. These blooms would have been tightly closed, and thus less vulnerable, during the nights of freezing temperatures. Photo by Debbie Roos.

So enough about blueberries, what about our other fruit crops…how did they do? Peach and apple trees were also damaged by the freeze, although we need a couple of weeks to know the full impact on these crops (see photos below). I also heard reports of damage to grapes, blackberries, and figs. Strawberries are fairly easy to protect with row covers and overhead irrigation and seemed to do fine.

I talked with Dr. Mike Parker, our North Carolina State University Fruit Tree Specialist, to find out how widespread the freeze damage was on tree fruits throughout the state. This is his report:

“With the freezing temperatures we have experienced this past week, we are concerned about the status of our tree fruit crops throughout the state and are monitoring them closely. A temperature difference in the orchard of 3-4°F can be the difference between a full crop of fruit and excessive flower damage with no fruit on the trees. We also know that if 10-15% of the flowers on a peach or apple tree survive there is still the potential for a full crop of fruit. Peaches are very vulnerable because the first growth that emerges in the spring is the blossoms. Apples send out green leaves first followed 2-3 weeks later with the blossoms. Apples typically bloom later than peaches and produce a cluster of blooms that don’t all emerge at the same time so even if some are killed in a freeze others may survive.

Because crop loss usually occurs within a very narrow temperature range, some commercial growers use techniques to minimize crop loss. Overhead irrigation is one option used, but requires a significant amount of water (approximately 4,500 gals of water per hour per acre for 4-6 hours) and high pressure to operate. This method must be used for the duration of the freeze event and it is the constant formation of ice that protects the crop and not the presence of the ice. If ice is formed on the trees and the water is turned off, the ice will then begin to evaporate and cool the blossoms below the ambient air temperature. Another method that is used to protect blossoms from freezing uses large wind machines. With the wind machines it is not the movement of large volumes of air but the wind machine will “pull” air from a warmer inversion layer above the earth (i.e. 30-100 ft.), recirculating it in the orchard. However, both of these methods have limitations and if wind speeds are greater than 10 mph neither method will be successful.

The risk of crop loss during the early spring is one of the greatest challenges of growing tree fruit in North Carolina. To minimize these losses growers must carefully select the orchard site where they will plant the orchard, select the proper varieties, and consider options for frost protection.” 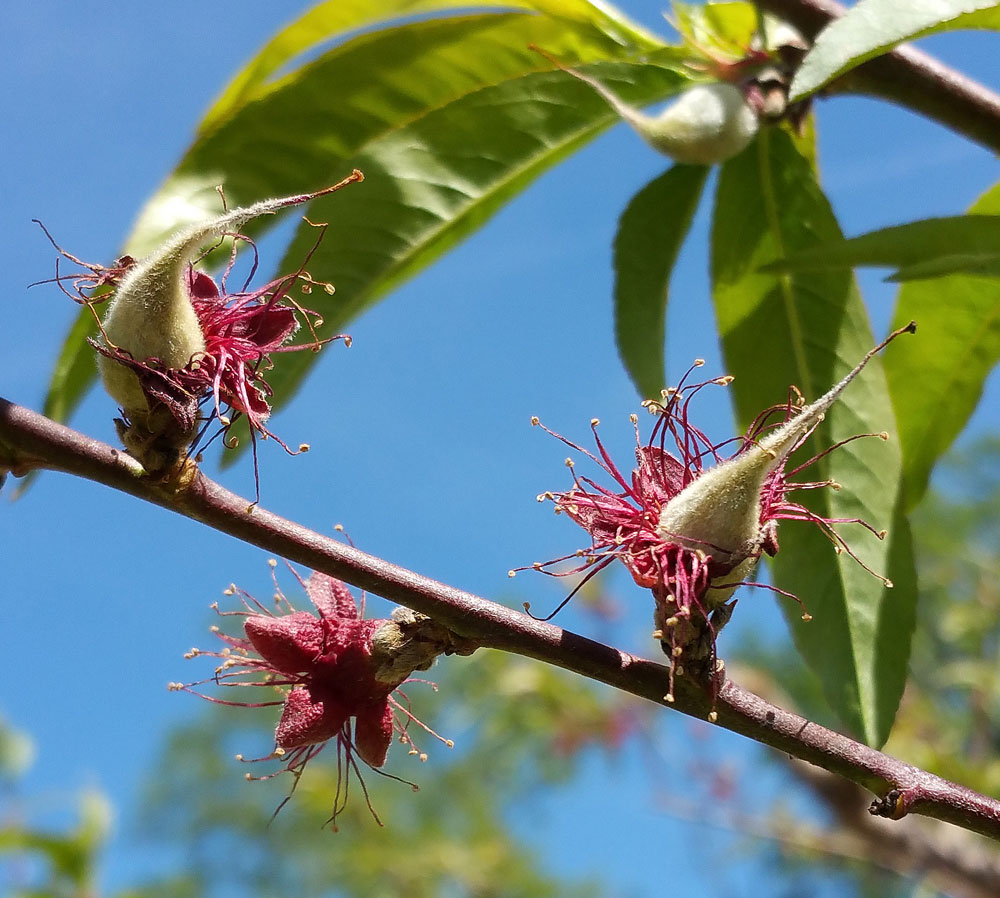 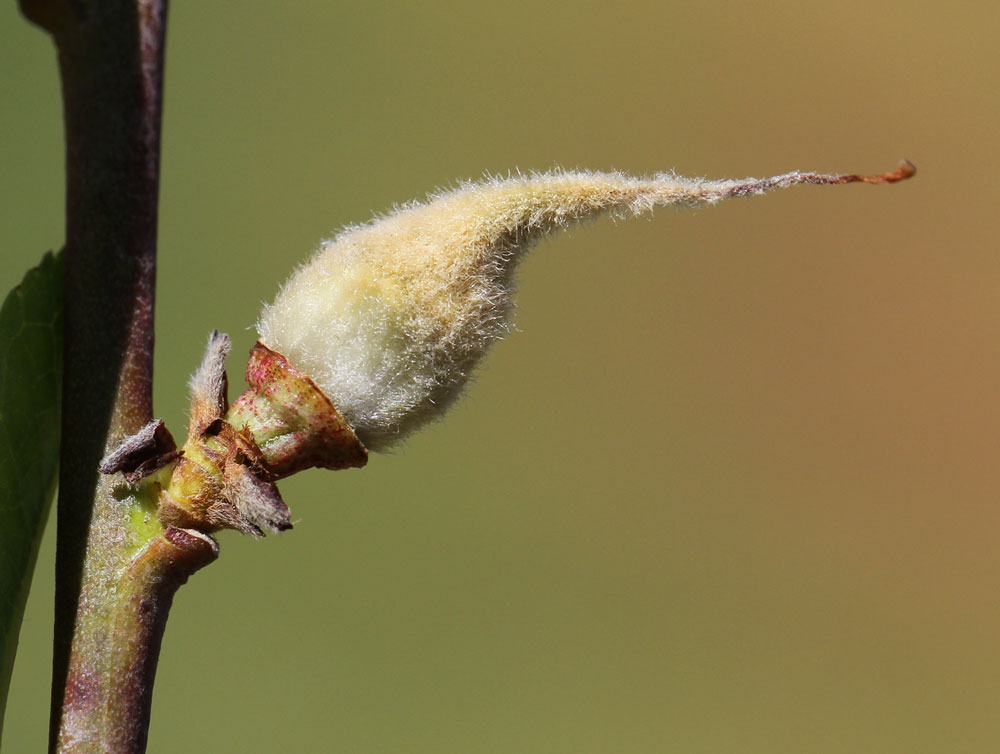 Young peach fruit damaged by the April 6th freeze. The small developing fruit are more vulnerable to frost damage than the blooms. Photo by Debbie Roos. 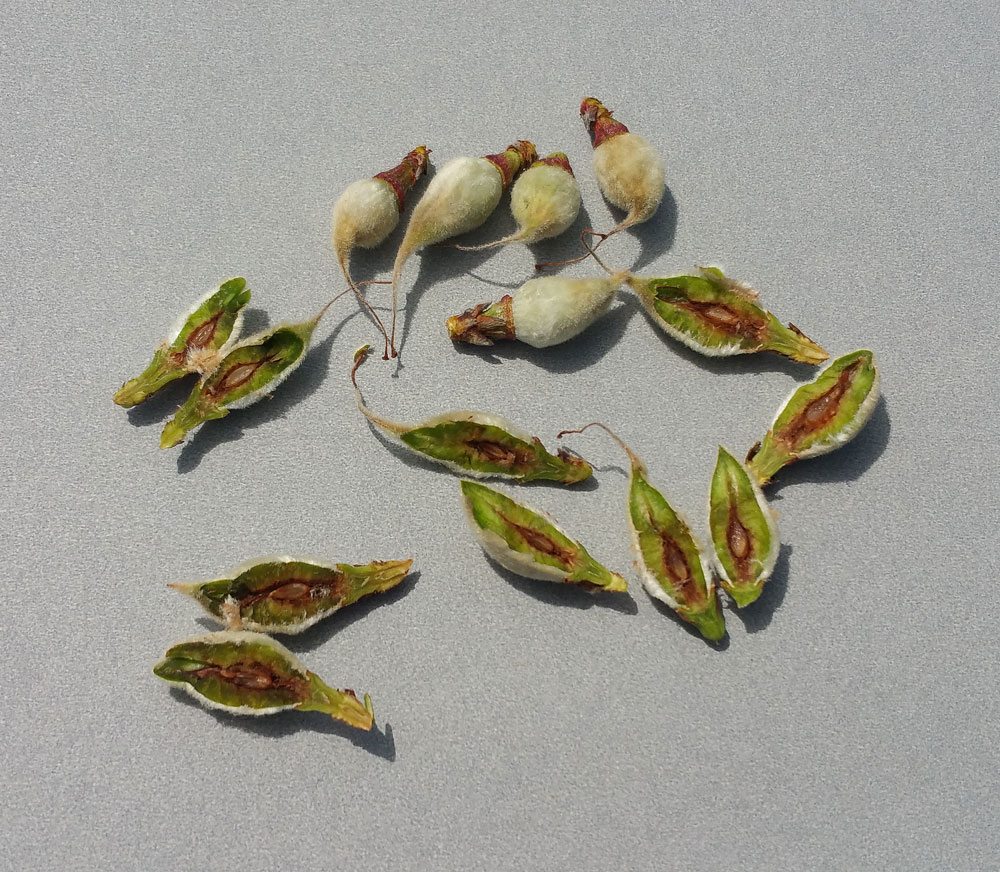 You can’t always tell from outward appearances if fruit was damaged by freeze. The best way to tell is to cut the fruit in half. The center of the developing fruit should be green, not brown like these peaches. A brown peach is a dead peach, and these will eventually fall off the tree before maturing. Photo by Debbie Roos. 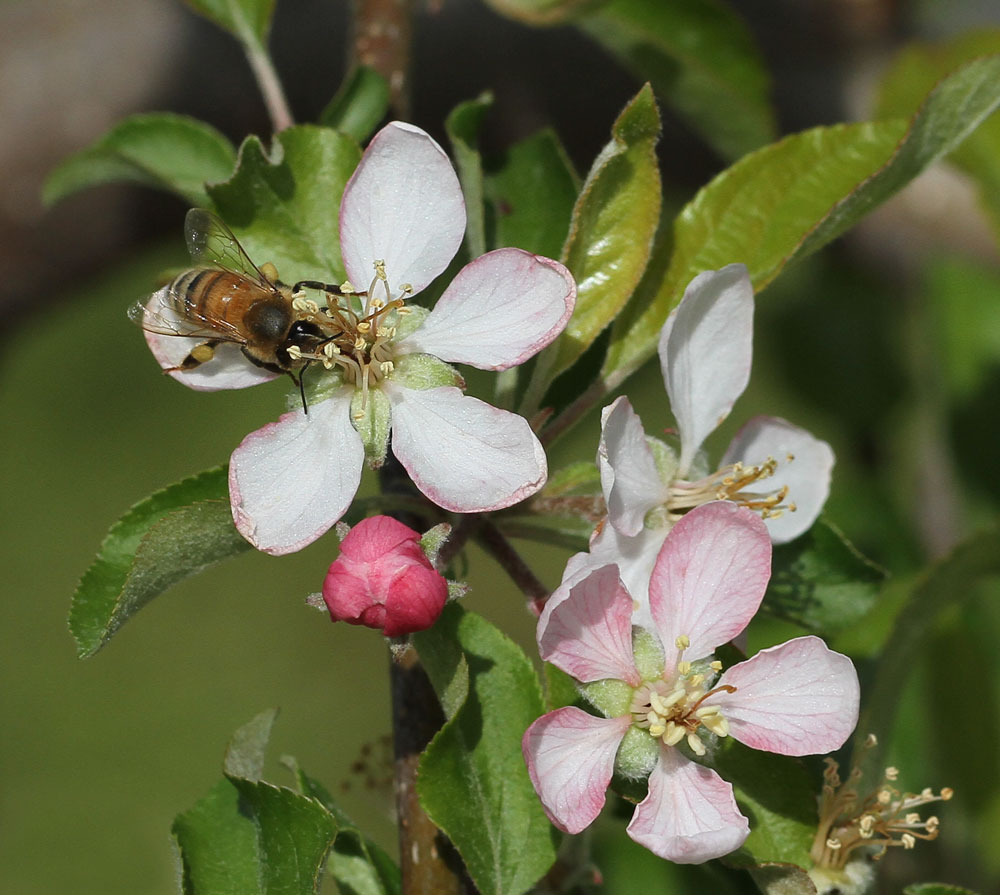 A honey bee visits an apple bloom on the day after a hard freeze. These apple trees are planted at the top of a hill where it did not get as cold and seem to have suffered less damage. Photo by Debbie Roos. 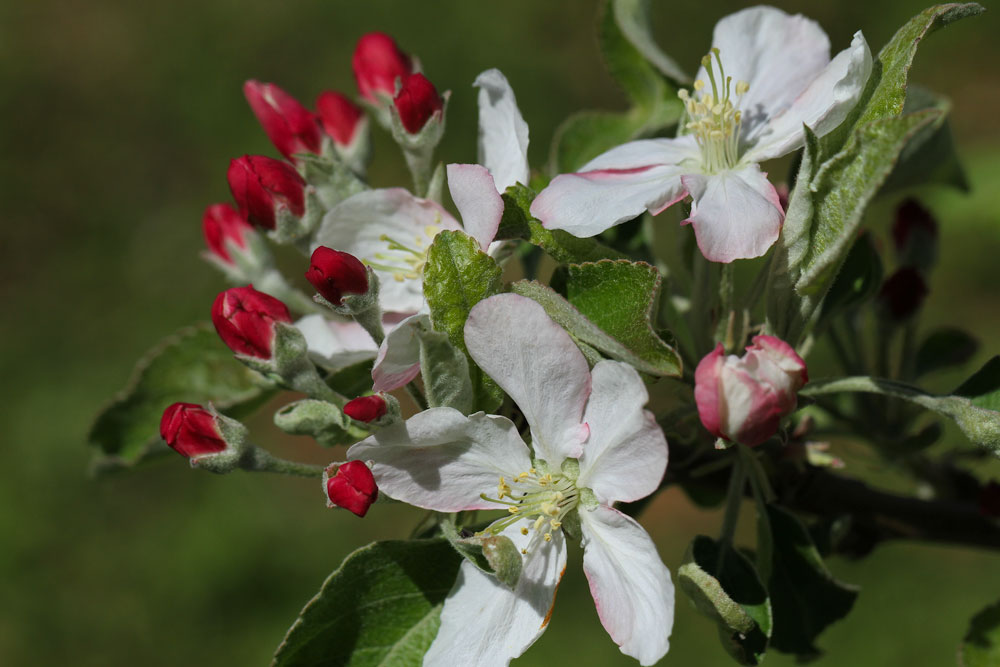 This photo of apple blooms was taken several days after a hard freeze and shows the various stages of blooms, from closed to fully open. Because not all the apple blooms open at the same time, even if some are killed by a freeze others may survive. Photo by Debbie Roos. 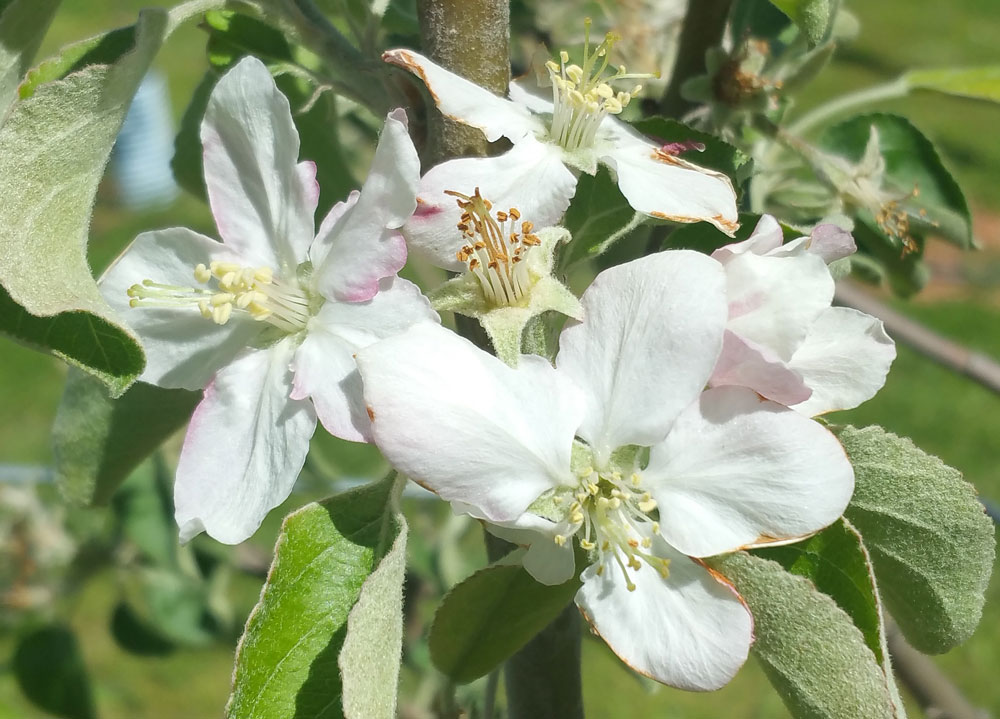 The king bloom (the bloom in the center of the cluster with no petals) on apples opens first and produces the largest fruit. It’s also most vulnerable to freeze damage. Photo by Debbie Roos. 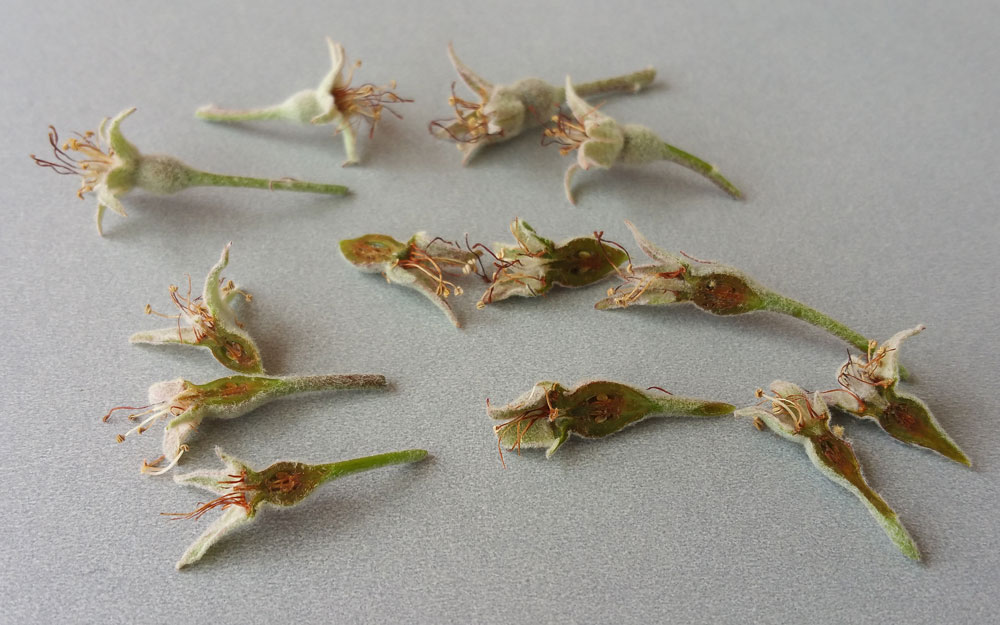 I cut into some of the developing king blossoms and the freeze damage was evident by the brown centers. The king blooms produce the largest fruit so some of this was lost in the freeze but the side blooms were not damaged and will produce a crop. Photo by Debbie Roos.