Find this article at:
go.ncsu.edu/readext?274739
— Written By Debbie Roos 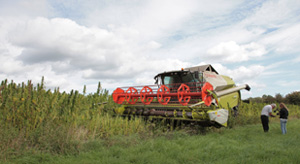 “Bringing It Home” to Screen in Siler City

A screening of the documentary, “Bringing It Home” will be hosted by the Siler City Development Organization on Friday, February 21, 2014 at 7:00 p.m. in the Old Braxton Gym on Third Avenue in Siler City.

Hemp has the potential to build a billion dollar domestic industry in the U.S. In 2013 twenty-one states introduced industrial hemp legislation, and Kentucky is looking at hemp as a replacement crop for tobacco. Currently, more industrial hemp fiber, seed and oil is exported to the U.S. than to any other country and American consumers are purchasing over $500 million in hemp products annually.

The award-winning documentary Bringing It Home explores the question of why a crop with so many widespread benefits could not be farmed in the United States by exploring its history, industries and current farming legalization efforts.

Filmmakers Linda Booker and Blaire Johnson were inspired by environmentally-conscious home designer Anthony Brenner’s story to find the healthiest building material available to build a safe indoor environment for his young daughter Bailey, who is sensitive to synthetic chemicals. Brenner received national media attention when he and Hemp Technologies completed “America’s First Hemp House” for the former mayor of Asheville, North Carolina. Booker and Johnson tell the story of hemp through animation, archival images and footage they filmed with hemp business leaders and entrepreneurs like Brenner in England, Spain, Washington D.C., California and North Carolina.

“We made “Bringing it Home” with the intention of reaching a broad spectrum of viewers – from policy makers and civic groups, to farmers and health advocates, from consumers to the construction industry – with the same strategic message about how hemp offers solutions and hope,” says Director Linda Booker.

The documentary aims to magnify dialogue and legislative action about hemp in order to facilitate America’s transition to this sustainable and important farm commodity.

The public is invited to this screening and conversation with Linda Booker on Friday, February 21, at 7:00 p.m. in the Old Braxton Gym on Third Avenue in Siler City. Donations will be accepted and concessions will be available for purchase.

Visit the Bringing it Home website for more information.