The red imported fire ant, Solenopsis invicta, is native to Brazil and was accidentally introduced to the United States at the port in Mobile, Alabama in the 1930s, probably from infested soil used as ballast in cargo ships.

There are four species of fire ants native to North America. The southern fire ant, Solenopsis xyloni, is found from North Carolina south to northern Florida, along the Gulf Coast and west to California. The presence of natural enemies and the rapid spread of the dominant red imported fire ant help keep southern fire ant populations relatively low. It is not considered a pest like the red imported fire ant.

In North Carolina, the red imported fire ant is found throughout much of the eastern half of the state, along with a couple of counties in the very western part of the state. The map below shows the areas (in red) that are currently under quarantine by the U.S. Department of Agriculture (USDA) and the North Carolina Department of Agriculture & Consumer Services (NCDA&CS). The quarantine mandates that the export of certain items (nursery stock, baled hay and straw, earth-moving equipment, etc.) that might carry fire ant infestations to other parts of the country is regulated. 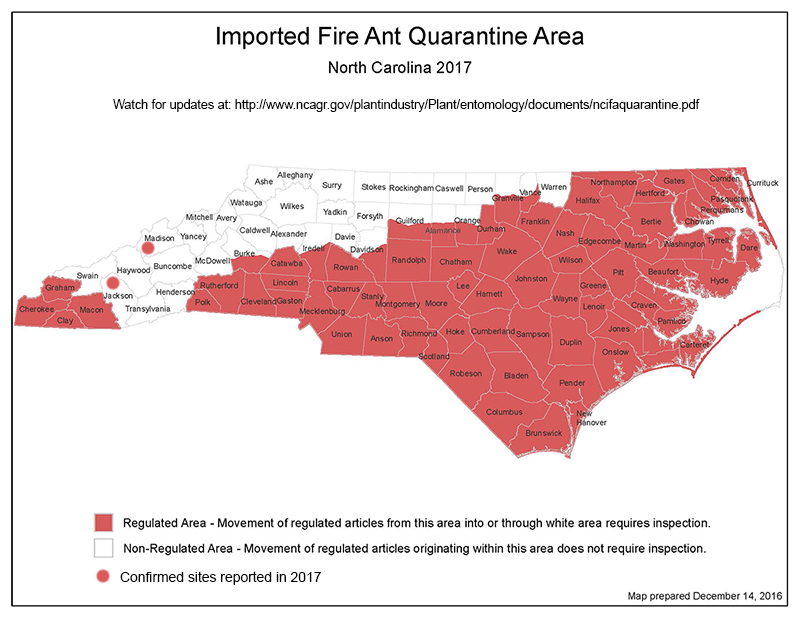 Colonies of fire ants consist of eggs, brood, polymorphic workers, winged males, winged females and one or more reproductive queens. New colonies are formed when a mated queen burrows into the ground and lays eggs. Once the first generation of workers emerges they begin foraging above ground for food to feed the queen and the developing brood. Within 30 days, larger workers have emerged and the colony begins to grow. Within six months several thousand workers can occupy the colony and a “mound” is readily visible. The polymorphic nature of the workers is striking: the largest workers can be up to 10 times the size of the smallest workers. The queen can live up to seven years and produces an average of 1,600 eggs per day throughout her life. At maturity, a fire ant colony can consist of over 250,000 ants. 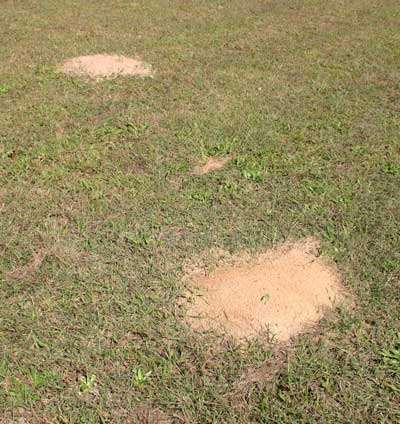 Fire ant mounds on a lawn. 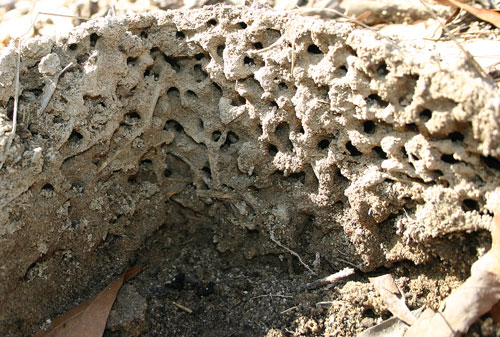 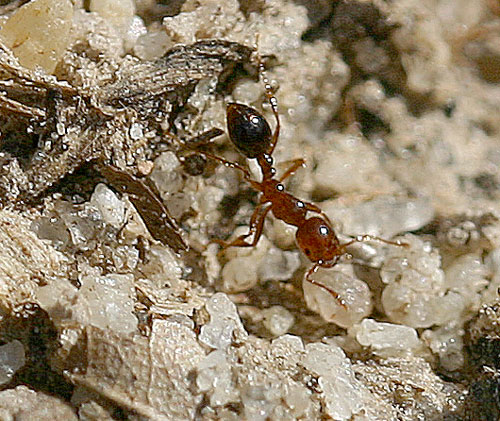 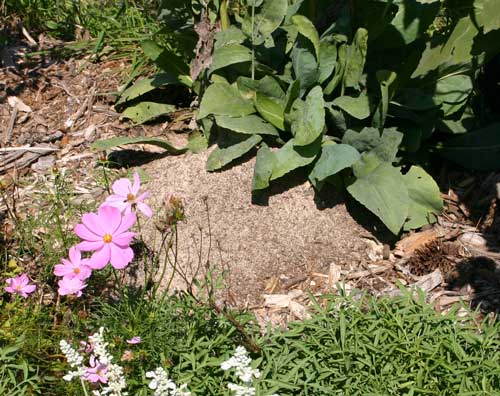 Fire ant mound at base of Rudbeckia maxima in a flower bed. 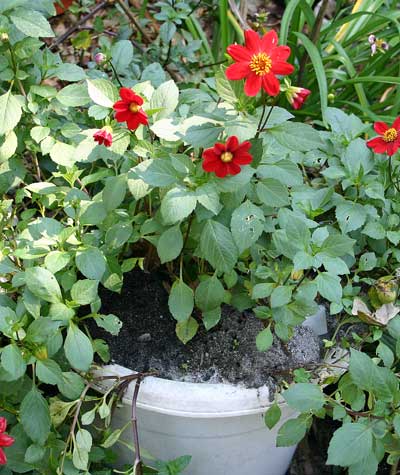 Fire ant mound in container-planted dahlia. Often, fire ants co-exist peacefully with plants. This dahlia has shared space with a large fire ant mound all summer. The mound rises upward into the plant canopy yet the dahlia continues to thrive. It is in a difficult spot to treat because it gets watered frequently.

Fire ant mounds have a hard, rain-resistant crust and are often found in open sunny areas. There are usually no external openings in the mound; underground tunnels allow foraging workers to come and go. Fire ants are aggressive when disturbed and will defensively attack anything that disturbs their mounds or food sources.

Fire ants are omnivorous, feeding on insects, animals, and plants. Fire ants can have a devastating impact on native populations of ground-nesting insects, reptiles, birds, and mammals. Studies have shown that a minimum two-fold reduction occurs among populations of field mice, egg-laying snakes, turtles and other vertebrates when fire ants become established within an area. Fire ants also feed on seeds, seedlings, buds, and developing fruit.

Many regions of the southeastern U.S. are seeing increasing frequencies of “polygyne” or multiple queen fire ant colonies. This is a disturbing trend as nest densities of polygyne colonies can be ten times greater than those of the more common “monogyne” or single queen colonies. Research has shown that polygyne fire ants pose a serious threat to the biodiversity of native insect communities.

Fire ants can present particular challenges in an agricultural setting. They feed on germinating seeds and can girdle the stems and trunks of young fruit trees. Tunneling fire ants can damage potato tubers and peanuts. During drought, crop damage can increase as fire ants seek alternate water sources. In drip irrigation systems, fire ants will build their mounds over the emitters, reducing or blocking the flow of water to crops. Fire ants are attracted by electrical currents and have caused considerable damage to pumps and other electrical equipment. 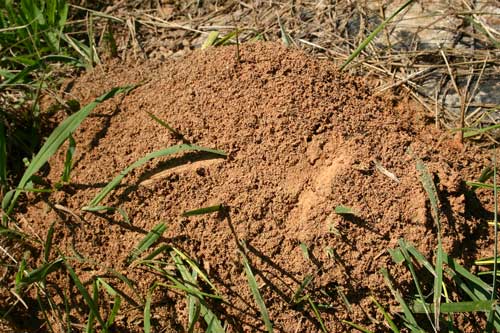 Fire ant mound in an orchard. 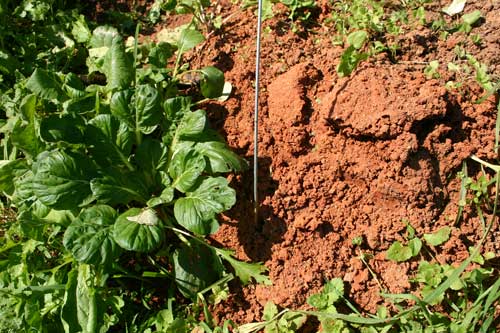 The presence of fire ant mounds can interfere with farm activities such as planting, weeding, and harvesting. Fire ants can sting repeatedly and hypersensitive individuals can experience severe reactions to stings.

The objective to any treatment strategy is to kill not only the worker ants but also the queen since she is the only one capable of laying eggs. No method is 100% effective for everyone and no method is permanent. Repeat treatments will be necessary because the ants will re-invade, often after a rain.

ATTRA, the National Sustainable Agriculture Information Service, reports that the aggressive use of insecticides against the imported fire ant has only served to wipe out competing and predatory native ant species and increase the competitive dominance of the imported species by killing off its competition. With that in mind, it is important that fire ant management strategies minimize effects on native ant populations.

Disclaimer: This information is provided as a guide only and I make no claim that it is completely comprehensive. I have spent considerable time consulting the OMRI list, reading pesticide labels, talking with specialists and suppliers, and evaluating local availability of products. However, pest control products are changing all the time. Always read and follow closely the directions provided on the product label before using any pesticide.

Biological control agents for imported fire ants include predatory mites, parasitic nematodes, parasitic flies, and the fungus Beauvaria bassiana. Scientific studies are being conducted to evaluate the effectiveness of some of these natural enemies, but others remain untested or have not been shown to be highly effective.

According to North Carolina State University entomologist Dr. Peter Hertl, native ants are the most important biological control agents for controlling fire ants. Hertl says that since native ants directly compete with fire ants for food resources, in many areas they are the only factor slowing the spread of the fire ant infestation. Studies have shown that where broad scale insecticide applications are made for fire ant control, the native ants are killed too. Unfortunately, without the native ants to compete and slow the spread, the invasive fire ants quickly reinfest the area, and often at much higher population levels than the original infestation that was treated. 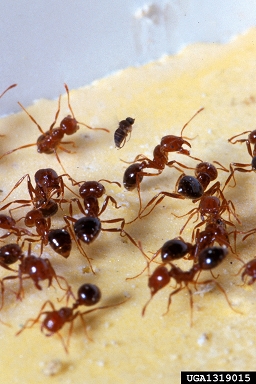 Since the red imported fire ant is native to Brazil, scientists looked to that country for natural enemies that could be brought to the U.S. to help control the pest. They discovered the phorid fly (Pseudacteonspp.), also called the decapitating fly or the brain-eating fly. These tiny flies parasitize fire ants but do not attack our native ants. The female fly hovers above mounds and swoops down and lays her egg on a foraging worker. The egg hatches and the larva bores into the fire ant and spends about three weeks feeding inside the ant before pupating inside the ant’s head. The ant’s head eventually falls off and the adult fly emerges (pretty cool, right?).

Fire ants will try hard to avoid
the sting of a phorid fly. Photo courtesy of Bugwood Network

As dramatic as this is, the main reason phorid flies are such effective biological control agents is not because they parasitize and kill fire ants but because of their effect on fire ant behavior. Fire ants can readily detect when phorid flies are present and are so terrified of these natural enemies that they will not come out of the mound to forage for food!

Many southern states have spent years mass rearing and releasing phorid flies with varying levels of success. The goal is to establish permanent populations of phorid flies that can survive our winters.

After seven years of rearing and releasing phorid flies, researchers are starting to find flies that have survived through the winter in a few counties. For example, less than three years after their initial release in Wake County, phorid flies were found 17 miles from the release site at locations to the east, north and south.

Additional species of phorid flies are being tested by the USDA-ARS, and as they become available for release the NCDA plans to evaluate them as biological control agents. The NCDA’s Dr. Kathleen Kidd  says that so far it is difficult to see an impact on the red imported fire ant populations resulting from the phorid fly releases. It will take more research and more time to build up permanent populations of the flies to have sufficient numbers to slow the progression of the fire ants.

This method is most effective when most of the ants are close to the mound surface, such as on cool, sunny mornings or after a rainfall. Research has shown that approximately 3 gallons of boiling water will eliminate about 60% of the mounds treated. Remember that the queen can be several feet below ground and if she is not killed the mound will survive. Use care when handling large quantities of boiling water to avoid serious burns.

Note: In some instances I have listed suppliers for the pesticides mentioned. This is because some of these can be difficult to source. Inclusion on this website does not imply endorsement by North Carolina State University or North Carolina Cooperative Extension of any of the companies or products listed.

Baits are granular products that are collected as food by foraging ants. The bait granules (generally corn grit) are impregnated with oil to make them attractive to the ants as food. The ants take the bait back to the mound and feed it to the queen and the rest of the colony. According to North Carolina State University entomologist Dr. Hertl, the use of baits can reduce environmental contamination from insecticides since baits contain a very small amount of insecticide. Spinosad is the active ingredient in the organically approved baits.The best time to apply baits is in the early evening. Do not apply baits when the ground is wet as moisture can cause the oils in the bait to become rancid.Most bait products describe two options for applying the product: 1) broadcast application over a large area and 2) mound application of the bait over the mound and extending to about two feet from the mound.Mound applications are recommended because they will have the least impact on foraging native ants which directly compete with the imported fire ants. If bait is broadcast over a large area, it is likely to be ingested by foraging native ants and other insects. 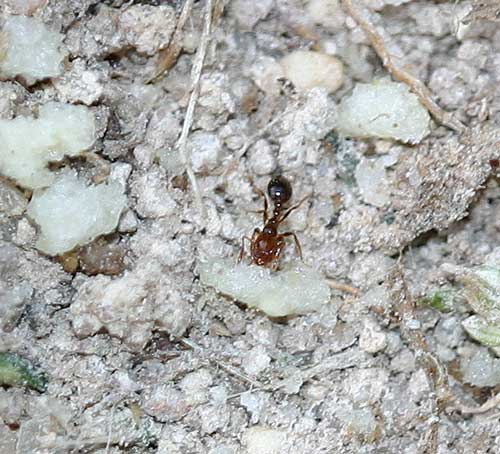 Fire ant taking a bait granule back to the nest.

There are at least two organically approved spinosad baits:

2. Greenlight Fire Ant Control with Conserve®. This product is labeled for use on lawns, around ornamental plants, and in home gardens (one acre or less). Contains 0.015% active ingredient by weight.These baits are available at both Pittsboro Feed and Country Farm and Home Supply in Pittsboro. Check your local farm and garden stores for supplies near you.