We have two organic growers who are experiencing problems with their transplants. We don’t know if the problems are related – I don’t think they are. We would love some fresh eyes on these problems. Please read the summaries below and view the photos and let us know what you think. The problem with Grower 1 is much more serious as she lost most of her spring transplants and continues to have problems with subsequent sowings.

This grower lets another grower use some of her greenhouse space and they use two different media: one uses a Fafard mix + worm castings and the other uses the Sunshine mix with NO worm castings – both showed the same symptoms so we have ruled out a problem with the worm castings or soilless media

She DID submit a sample to the PDIC and it came back abiotic.

She submitted a well water sample to a private lab and it came back fine.

Then I learned she had a cracked propane heater so we suspected ethylene damage; the heater was replaced on 2-19. She planned to submit an ethylene sample but in the end just replaced the cracked heater. The problems are still occurring, even with flats sown after the heater was replaced. Ethylene can of course affect seedlings as well as germinating seeds. I talked with Sylvia Blankenship yesterday and she said there is a chance there is still an ethylene problem if the heater was not properly installed. She has seen this happen. She did think some of the problems looked like ethylene damage, especially on the brassicas. I have advised the grower to submit an ethylene test next week just to make sure that problem has been fixed.

Description from grower: problems totally widespread, we have only saved the first two plantings of lettuce, which have rebounded yet were never that bad, mild symptoms of leaf curl and bumps on the leaves. We have given up on three plantings of broccoli and cauliflower (total of 60 x 72 cell trays). The first and second plantings two weeks apart both germinated and looked fine until week 3 – first sign bleached out cotyledons, second sign curled misshaped true leaves some with bumps, others never formed true leaves and 8 weeks later still at cotyledon stage, totally stunted. Third planting just barely germinated, some not at all, and stayed stunted for a month now at tiny just above soil cotyledons. I associated this difference with maybe the weather and when and how much the heater was running. I think the third planting was germinating when we had the 10 degree weather and thus lots of heater all night long and during the days too. Two plantings of chard a month apart, most didn’t germinate or what did instantly turned brown and withered. It seemed the most sensitive. The spinach looked okay then week three or so turned a brownish white at the tips with lots of curled true leaves and stunted. Kale and cabbage same as broccoli and cauliflower. We have kept one tray of broccoli and one of chard from the first planting which was 1/5. They have looked the same since the beginning of February. Some of the younger lettuce looks messed up, again, I think by the date it is the stuff that was germinating and just coming up during the 10 degree weather, it doesn’t seem to be able to pull out of it like the first two. I did have some trays from the first cabbage that were drastically different, one tray would be totally stunted at the cotyledon stage, and the one next to it would have all made it to true leaves yet curled and deformed.

In mid-February, the grower who shares the greenhouse space sent one flat of collards to a friend’s greenhouse for three weeks and kept one in the greenhouse. Both looked the same at the beginning. The one sent away came back a couple of days ago and looked great, while the one that stayed behind still doesn’t look good. This points to an environmental problem such as ethylene in the greenhouse. I mentioned she might want to do this again because now there is a new heater. The main thing steering me away from thinking the problem is ethylene (besides the fact that the cracked heater was replaced three weeks ago) is this: there is one photo (below) of  side-by-side cabbage flats (same variety, planted on the same day) and if it was ethylene damage the same variety in the same spot in the greenhouse should have been affected equally. 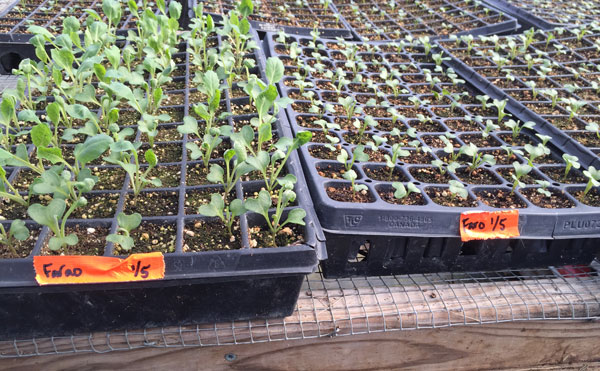 These cabbage flats (below) were sown at the same time. Same variety. The one flat that is larger does have the leaf curl and distortion you just can’t see it from this far away in the picture. If there was an ethylene problem in the greenhouse these should have been equally affected.

Symptoms on other brassica seedlings: 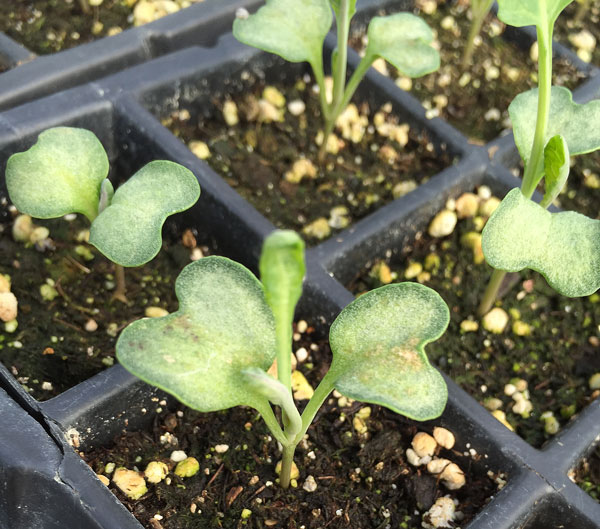 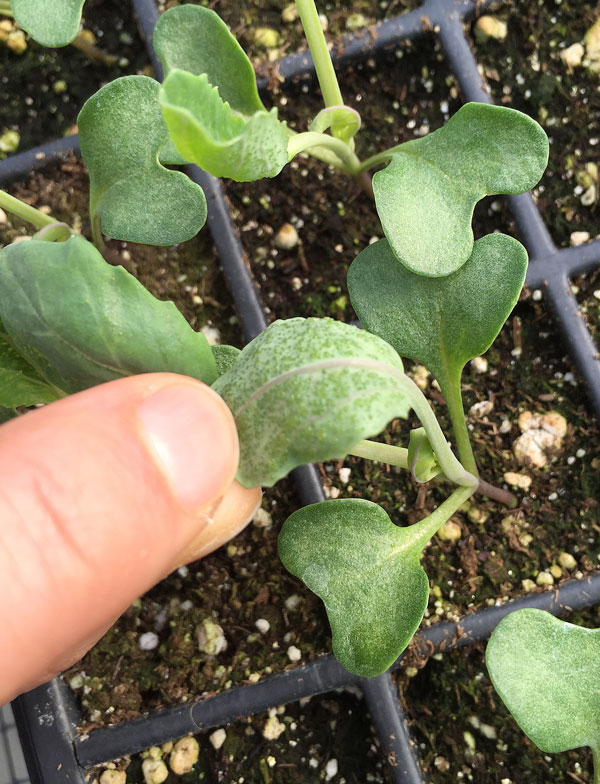 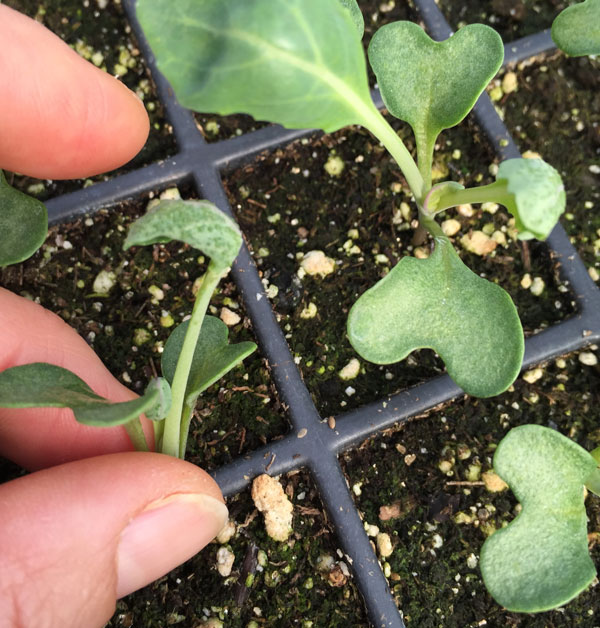 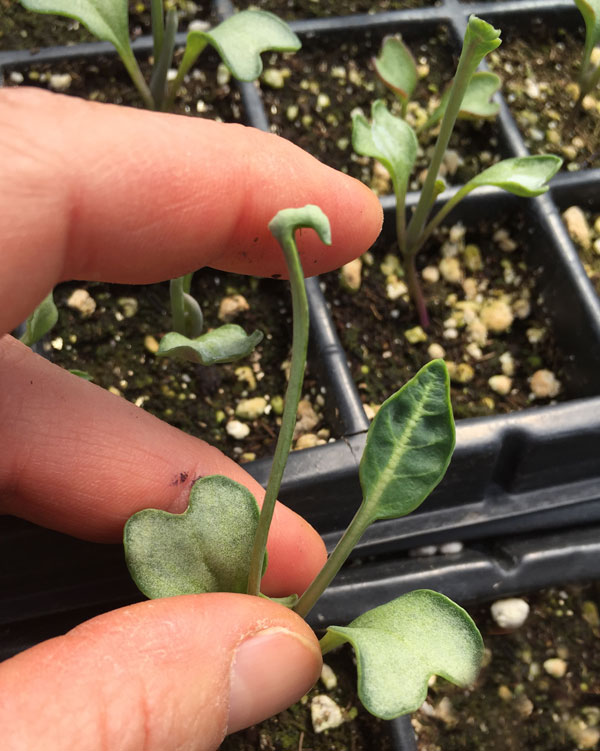 From the grower: the old heater was replaced on 2/19. I switched to Sunshine soilless mix and sowed lettuce and spinach 2/9, 2/16, 2/23, 3/2. The 2/9 planting of lettuce took 2 weeks to germinate, and is the funky looking stuff in the pictures below. It was sown just a bit before the really cold snap we had so must have had the heater going all night and during the day. Neither of the chard plantings ever really germinated. And finally the 2/23 planting is at the cotyledon stage, and I think showing some signs of cupped leaves in a few, the tiny true leaves are barely poking out..

Photos below are of lettuce showing distortion of true leaves. These plants have brown roots and are dying back. 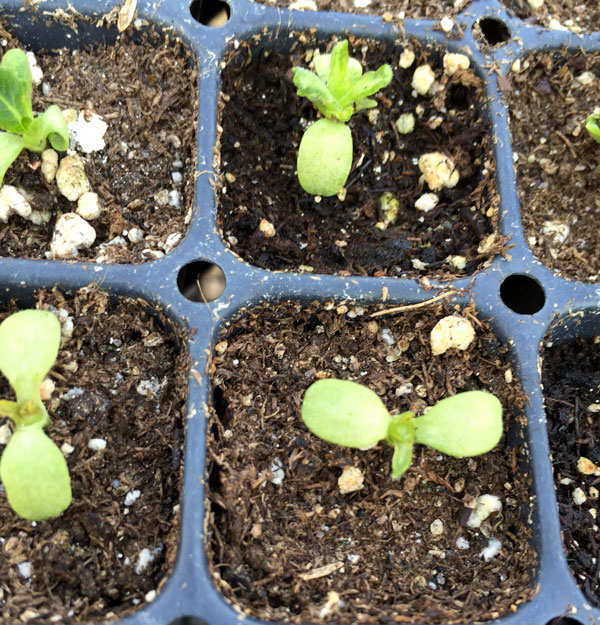 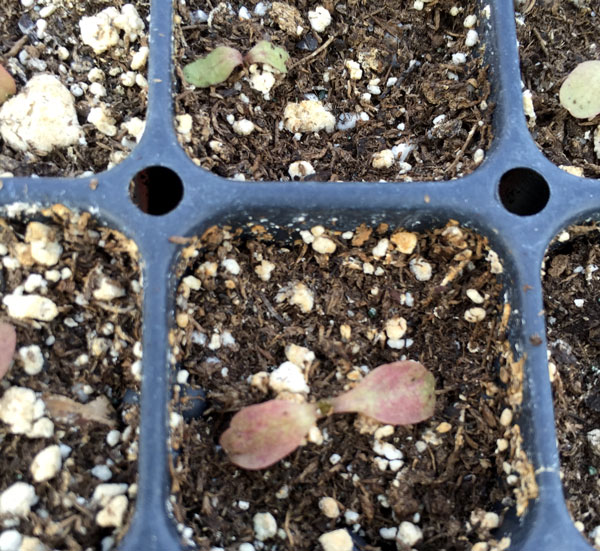 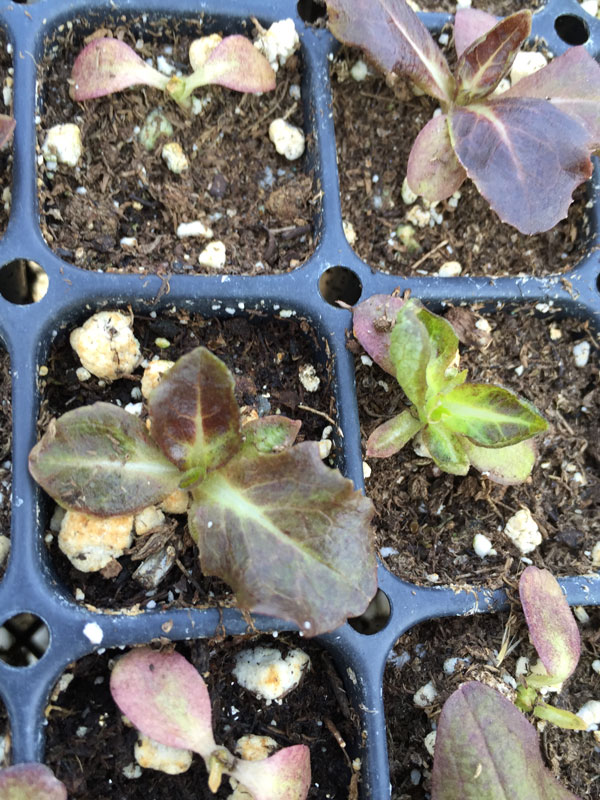 All in all we have lost ALL of our spring greenhouse crops except or two plantings of lettuce.

About 10-15% of his plants are affected, much less than Grower 1 who lost most of her crop.

He has submitted samples to the PDIC to check for disease (we don’t suspect disease but want to rule it out) – awaiting results.

He is submitting a soilless media sample with the worm castings mixed in as a diagnostic sample to the NCDA (awaiting results).

The worm castings analysis showed that they are lower than usual in nutrients so I wondered if some of his issues may be nutritional since he has not provided any other fertilizer for his transplants (I also recommended he consider doing a tissue sample in addition to an analysis of the soilless medium). But since the problems are so spotty and not uniform (one flat affected while the one next to it of the same crop is not) this is not likely the case. 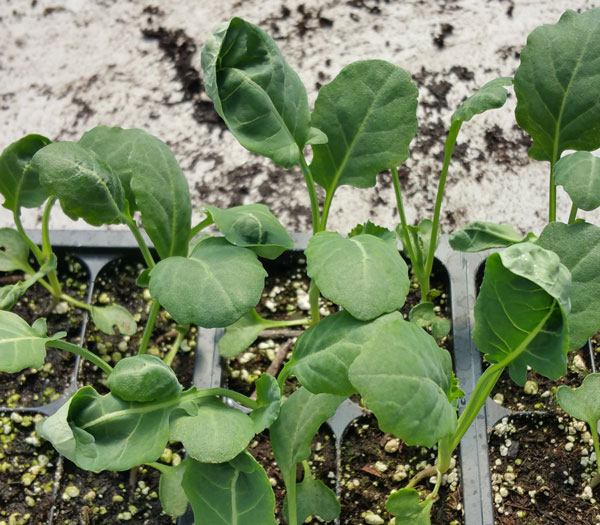 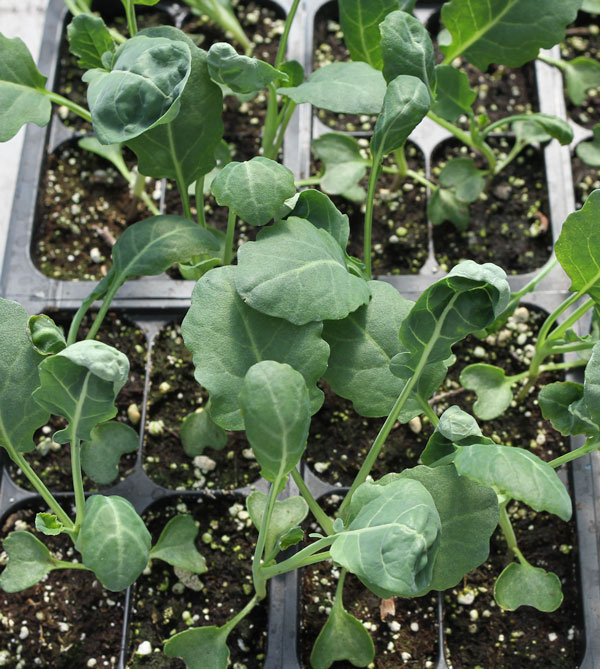 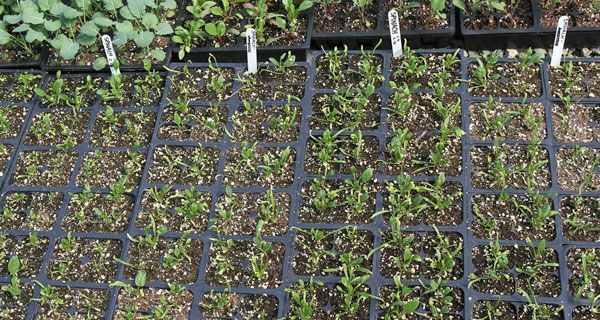 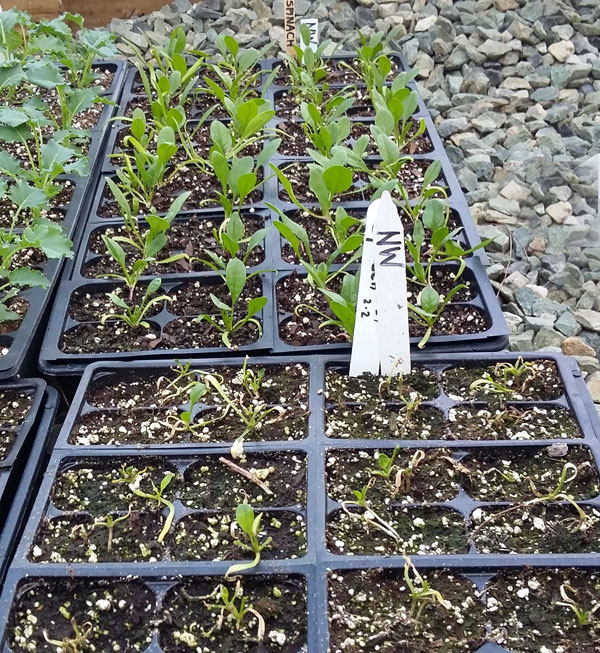 The top flat of spinach looks okay while the one below it is pitiful. Both planted (potted up) on the same date. 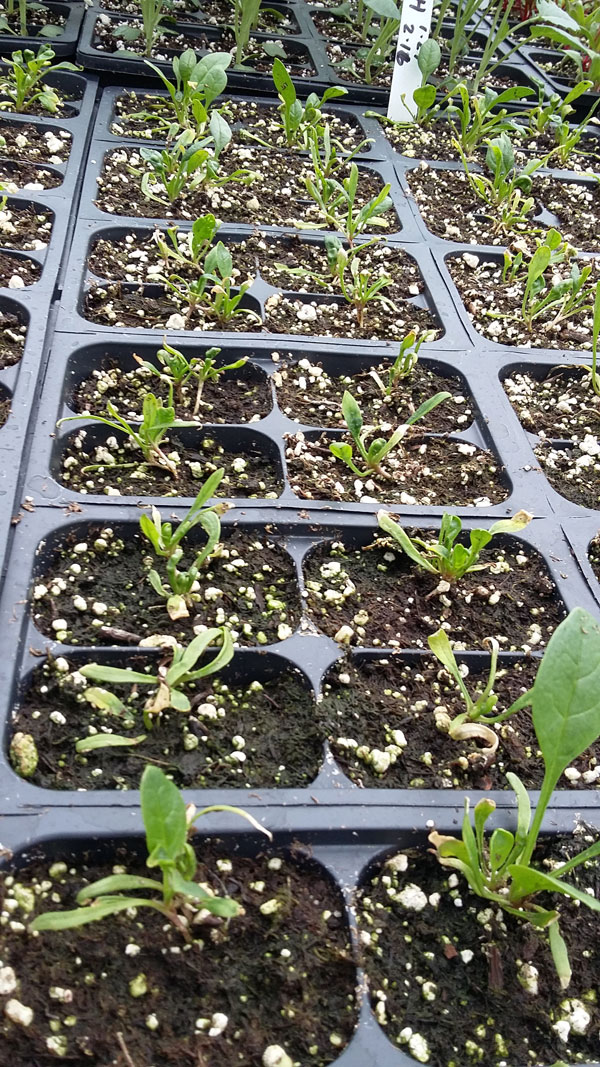 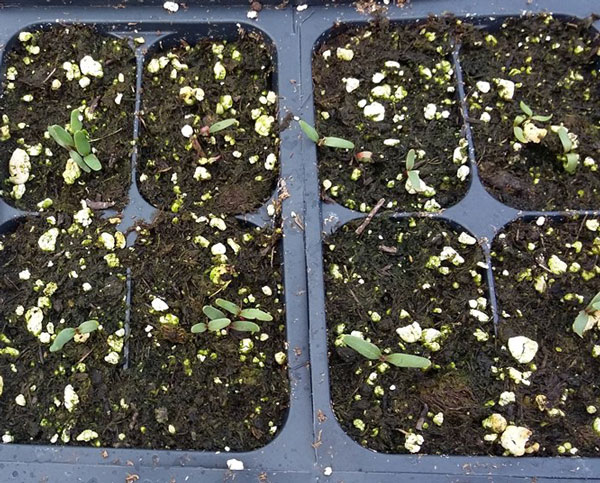 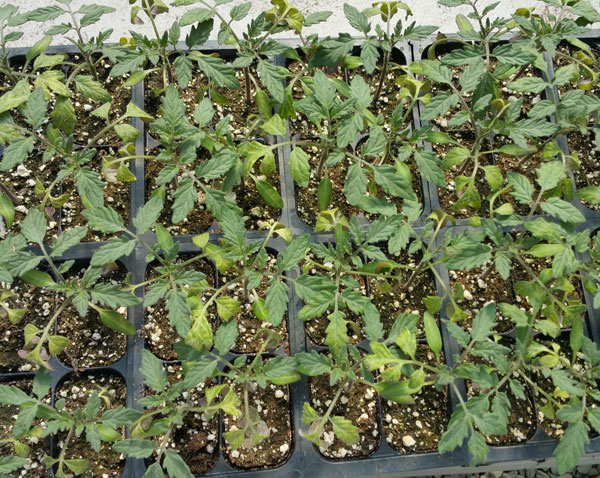