Find this article at:
go.ncsu.edu/readext?212433
— Written By Debbie Roos 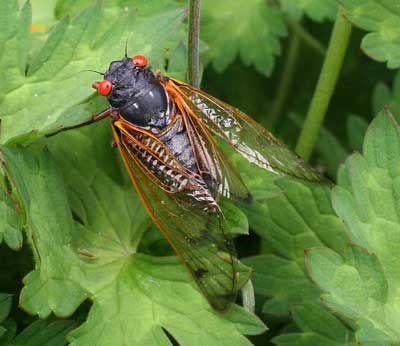 Many of you have been reading about the coming emergence of the 17-year periodic cicadas (Magicicada), likely bringing back memories of 2011, the last time central North Carolina saw a periodic cicada invasion. In 2011 we spent over a month in the company of millions of 13-year cicadas, marveling at the surprisingly loud and surreal din of their mating calls as we shared cicada stories with friends and neighbors (the ubiquitous insects were a big hit with kids, dogs, cats, and chickens!).

Do farmers and gardeners need to be worried about the coming cicada emergence? That depends…

Many folks who experienced large cicada populations in 2011 were left with damaged young trees and bushes where the female cicadas cut slits into tree branches to lay their eggs. The cicadas prefer stems and branches about the diameter of a pencil to deposit their eggs; on mature trees only the branch tips are damaged and the trees recover but on young trees the damage can occur on the main trunk and on primary lateral branches, causing significant damage. Cicadas only feed on woody perennials, so vegetable and/or strawberry crops are not at risk.

Farmers and gardeners who have young plantings of blueberries, brambles, and fruit trees have plants that are potentially vulnerable to cicada injury. The good news, according to NC State University Small Fruit Entomologist Dr. Hannah Burrack, is that in all likelihood the populations of the 17-year Brood II cicadas are not expected to be nearly as large in central North Carolina as the populations of the 13-year Brood XIX cicadas were back in 2011. So even if you were inundated with cicadas two years ago that does not mean you will be overrun this spring – the populations are completely different. The 17-year cicada populations are expected to be most numerous in the mid-Atlantic and northeastern states; central North Carolina is at the southern end of the range of the Brood II cicadas. Based on the Brood II map, here in North Carolina most of the cicadas are expected to emerge a little northwest of the Triangle region (of course predicting emergence locations is not an exact science but is based on previous populations).

I know first-hand the damage these cicadas can do to young trees as I had to replace several newly planted native trees in my pollinator garden in Pittsboro after the Brood XIX emergence in 2011. The damage was all up and down the central leaders and lateral branches and was definitely not confined to branch tips. The stems were all at the perfect, apparently most enticing pencil-sized diameter that cicadas prefer and they did a number on them (see photo of damage below). If only a few branches are damaged they can be pruned out but when the majority of branches are significantly damaged, the young tree or bush might need to be replaced. 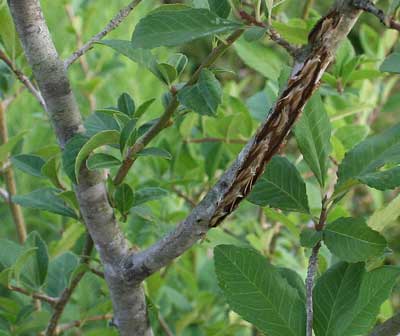 Branch of a young possumhaw tree (Ilex decidua) showing damage
from where the cicada deposited eggs in the stem.

If you are in an area with a high population of cicadas and if you have vulnerable plantings of young blueberries, brambles, or fruit trees, you can wrap netting around the plants to prevent the females from laying eggs and damaging branches. This may not be practical if you have a large number of plants, and netting will also exclude pollinators if the plants are in bloom. Dr. Hannah Burrack reports that there are some conventional pesticides (both foliar and soil applications) that may help prevent egg-laying; consult your county Extension agent for specific recommendations.